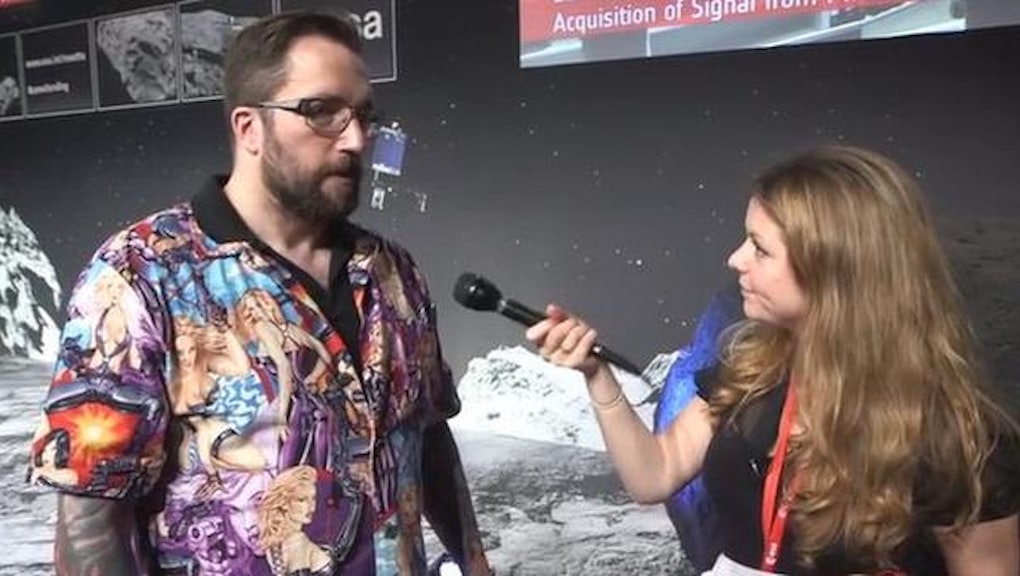 That fact was thrown into sharp relief this week after one a woman called out an instance of everyday sexism and was rewarded with death threats. And all because of an ugly shirt.

The incident is an important reminder of the difficult position that women working in the male-dominated tech and science sectors constantly find themselves in: If they stay silent, the culture is unlikely to change, and yet when they do speak out, they are dismissed, harassed and even threatened.

Matt Taylor, one of the scientists working on the European Space Agency's Rosetta Project, proved that even intelligent men can be oblivious. He was interviewed Wednesday about the ESA's probe Philae landing on a comet while wearing a shirt covered with women seemingly straight out of Miami Vice:

Science and tech writer Rose Eveleth was not a fan of the outfit, pointing out on Twitter how the choice reflects the pervasive attitude about women in science, technology, engineering and mathematics fields (STEM). The relatively mild critique was not well-received by men on the Internet, however, who responded with death threats and assertions she should kill herself.

The threats immediately call to mind the rhetoric of the current #GamerGate controversy. But they also highlight the dearth of women in STEM. The National Science Board's annual "Science and Engineering Indicators" study found that while women "represent half of all college-educated workers in the United States, they made up just 28 percent of science and engineering workers in 2010 – an increase from 21 percent in 1993," said U.S. News and World Report. Indeed, research suggests sexism is just one of several gender barriers that women face when seeking STEM careers.

Taylor, for his part, apologized for not seeing how the shirt would send a negative message to women pursuing STEM careers, a concession accepted by women in STEM.

The best reaction to the whole incident may have come from one clever Twitter user, who "fixed" the shirt by covering it in famous female leaders in STEM fields:

The woman responsible for this design has since vowed to make a product that shows the diversity of women in STEM. So, the next time Taylor does an interview, he'll have a least one other wardrobe option.