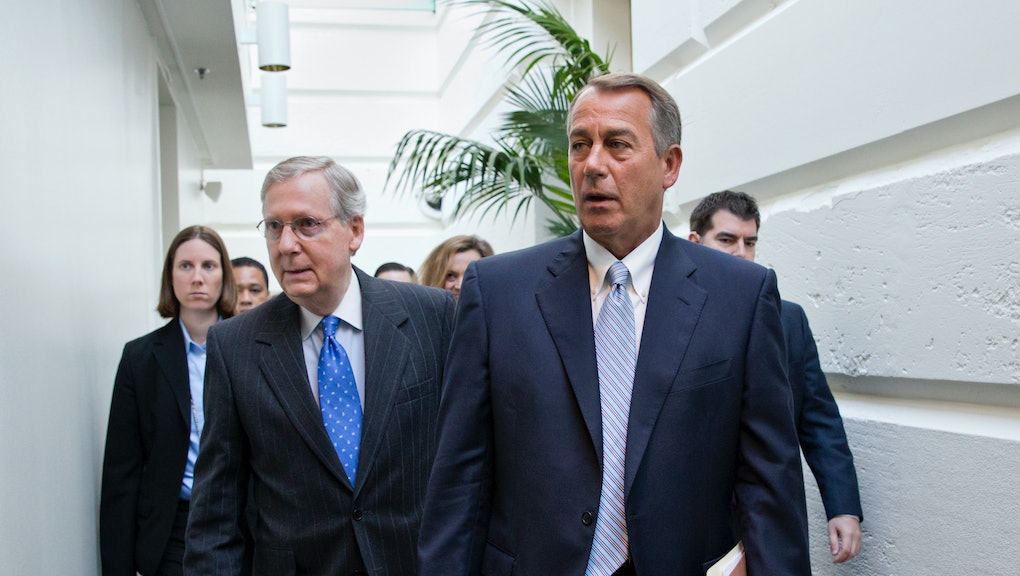 One Statistic That Obamacare Critics Don't Want You to See

A little more than 13 months after the Obamacare exchanges stumbled out of the gates, an overwhelming majority of newly insured Americans say they are happy with the end product.

More than 7 in 10 of the new law's beneficiaries told Gallup their experience has been either "Good" or "Excellent." Asked if they were "satisfied" with the cost of their plans, 75% said they were. That's a higher rate of satisfaction — by 14 points — than the 61% of Americans who obtained their coverage on the private market:

Certainly this should influence how Americans of all political stripes feel about the law. People really love their Obamacare!

Reality versus politics: The Gallup survey reveals the lived experience of people who have signed up for coverage under the Affordable Care Act, acquiring insurance in spite of Healthcare.gov's messy debut and the intransigence of Republican governors who refused to set up state health care exchanges.

The numbers underline the deeply political nature of the debate over President Obama's signature domestic policy achievement. According to one midterm election exit poll, 55% of all Republicans said they voted expressly to deliver a "message" about their opposition to the law. In Colorado, 82% of voters who backed Republican Senator-elect and current Rep. Cory Gardner also said they believed "Obamacare went too far."

The new data arrives just hours before this year's open enrollment period begins. Department of Health and Human Services says that 7.1 million Americans are currently getting their coverage through Obamacare-backed plans. They project the number of enrollees will grow to between 9 and 9.9 million by 2015.

That figure, though, is down from initial predictions, which put the expected total at 13 million. The decrease has spurred gloating responses from congressional Republicans like Tennessee's Rep. Marsha Blackburn, who accused the administration of trying to "rewrite its definition of success."

The new argument: Blackburn's response is typical of one of the two most prevalent lines of attack against the Affordable Care Act. The other is a legal issue and will be settled in the courts, but hers, the juicier one, argues that Obamacare isn't working because it's not attracting as many participants as the government projected two years ago. Blackburn, like so many other congressional Republicans, conveniently ignores the broader statistical trend, as seen in the Gallup poll results, and tends to cite anecdotal evidence to prop up her opposition.

Look at this bit from a September op-ed by Blackburn in the Washington Times:

Constituents continually tell us that Obamacare, even with subsidies, is more expensive than they can afford. We hear that deductibles and coinsurance have gone up, leaving people with higher out-of-pocket expenses. Finally, we have heard that people have been to the doctor and had a test ordered only to find out that the out-of-pocket expense for the test was too high, and they decided not to have the care that the doctor prescribed. Once again, it's an example of having an insurance card is not the same thing as having health care.

"Tell," "hear" and "heard" — too many GOP lawmakers seem to get their Obamacare "facts" via a really exciting game of telephone. Facts are less malleable. While some states do expect to see higher premiums, the national average will actually decrease by 0.2% in 2015, according to a study by the nonpartisan Kaiser Family Foundation.

The fight ahead: With an increasing number of Americans using Obamacare and enjoying the experience, Republicans have to make a decision: Do we go forward with a blind opposition or try to find some way to improve the system where it is flawed?

On a state-level — where elected officials are more directly responsible for their constituents — we have seen popular Republicans like Ohio Gov. John Kasich begin to embrace Obamacare, taking its Medicaid expansion money and flirting with a broader acceptance of the law.

But that position will likely be challenged and similar voices drowned out as we get closer to the 2016 presidential primary cycle. Conservatives are not going to drop their case against Obamacare anytime soon, so the eventual nominee, along with rest of the field, will have to be on the record, over and over, stating their opposition to the law and offering a plan to repeal it.

It's a dynamic that will ultimately hurt Republicans with the broader electorate. The numbers from this new Gallup poll are rooted in experience, not political bias. And when people feel the positive effects of Obamacare in their own lives, the argument to destroy it very quickly becomes a losing one.