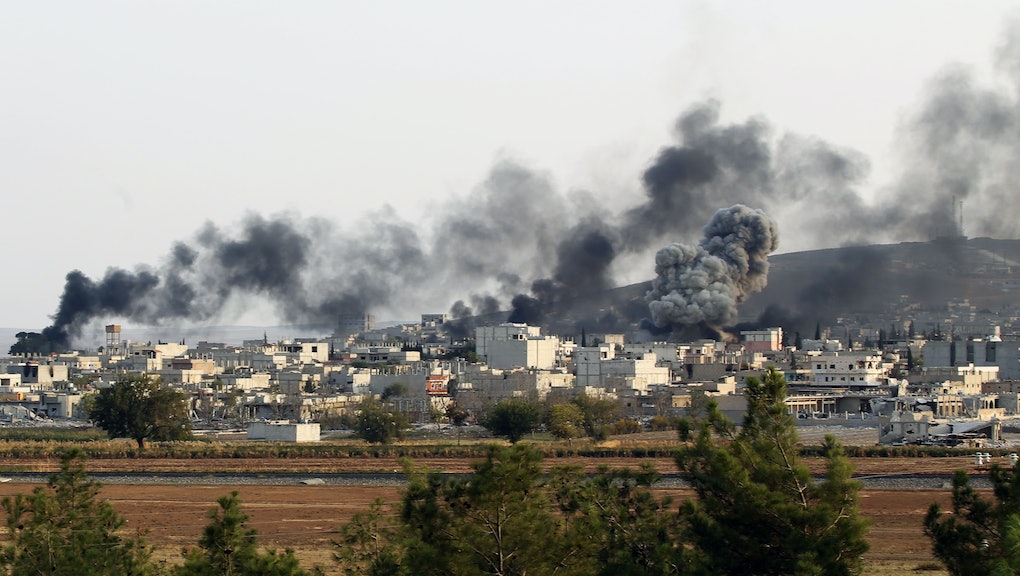 If You Feel Like the Media Misled You in the Debate Over ISIS, There’s a Reason

Try to recall the debate about about intervening in the Middle East to attack the militant group Islamic State (IS). The details may seem hazy. This isn't due to the passage of time — it's been less than two months — but because there wasn't a debate in the first place.

A new study conducted by the media watchdog Fairness and Accuracy in Reporting (FAIR) found that in the lead-up to the first airstrikes against IS, mainstream television news systematically excluded virtually any voices that cautioned against military intervention.

FAIR's analysis found a near-total absence of antiwar perspectives in interviews and discussion segments on major Sunday talk shows, PBS NewsHour and a sample of cable news shows on Fox, MSNBC and CNN in the time period from the release of IS video beheadings of American journalists through President Obama's Sept. 10 primetime pledge to "degrade and destroy" IS and up to the first airstrikes on Syria.

Out of hundreds of speakers across all segments, 61% spoke in favor of war and only 3% spoke against war. The remaining percentage didn't articulate a clear stance.

On the Sunday talk shows, which represent the center of Washington's policy debate, only 1 of 89 guests was antiwar. Democrats outnumbered Republicans on the shows.

FAIR's study shows that popular media chose to mirror the pro-war consensus permeating Capitol Hill in a manner all too reminiscent of the lead-up to the invasion of Iraq in 2003 that gave rise to this very showdown. The mainstream media once again opted to lubricate the gears of war by manufacturing a consensus at the very moment it had a responsibility to promote skepticism.

As appalling as Islamic State's massacres are, the political and media class' conception of its behavior as morally unique or necessitating military action is absurd. Historically, the U.S. has actively backed and assisted dozens of regimes, militants and terrorists who have engaged in identical behavior, only in those cases, the brutality advanced our geopolitical interests. We turn our backs on conflicts that extinguish the lives of millions of innocents all the time — consider that the long war in the Democratic Republic of Congo alone has produced more than 5 million casualties, and nobody has suggested raising a finger. Islamic State hasn't done anything that the U.S. hasn't endorsed or overlooked before. But setting aside moral consistency, there is no reason to think that good intentions are enough. The U.S. has a rich and storied history of failed military interventions since the end of World War II. War hawks must provide reasons for why the public should heed their opinion after a legacy of failure.

You don't need to be a dove to understand the importance of discussing not just whether we find Islamic State's behavior repugnant, but also how to take responsible action and not make matters worse in a war-torn region. Of all nations, the U.S. should recognize that violence doesn't always make things better.