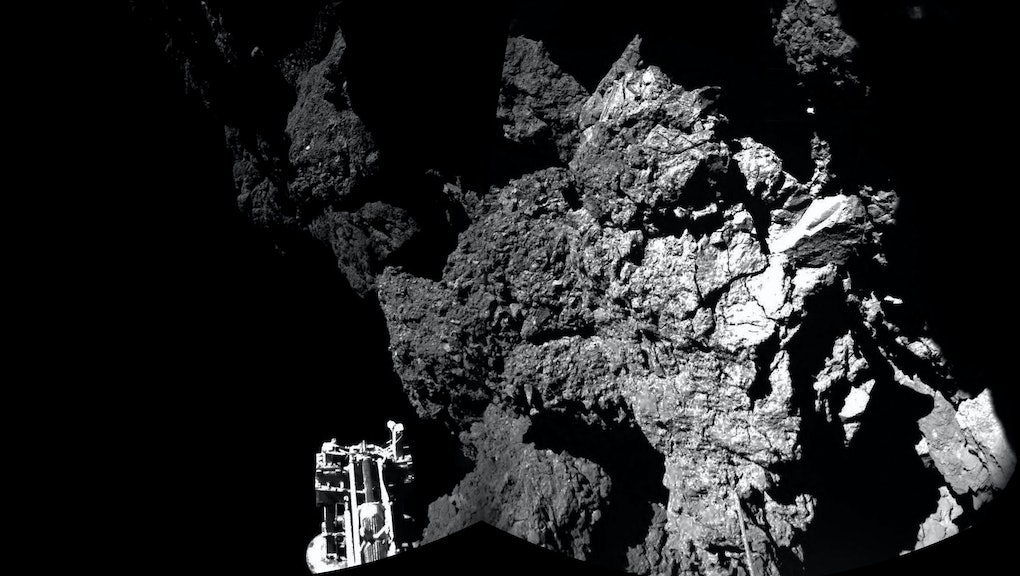 The Rosetta Spacecraft Is Listening to a Comet 'Sing,' and It's Kind of Terrifying

The news: Earlier this week, the European Space Agency's Philae probe landed on the comet 67P/Churyumov-Gerasimenko, marking a historic first in space exploration despite bouncing twice as it hit the surface. While eyes are on the lander, the Rosetta spacecraft that carried Philae to 67P is still very much active and gathering data as the comet travels as fast as 135,000 kilometers per hour through the solar system.

The day before the landing, a set of five sensors on the craft known as the Rosetta Plasma Consortium (RPC) recorded oscillations in the magnetic field surrounding 67P as the comet's coma interacted with solar wind. ESA scientists were taken by surprise, describing the resulting noise in a press release as the comet's "song."

As IFLScience points out, it sounds exactly like the Predator:

Seriously, try playing them side by side:

The science: ESA scientists are at a loss to explain the precise mechanism that produces the "song," although they speculate that it has something to do with the ionization of neutral particles ejected from the comet. The 40-50 millihertz frequencies are far too low to

frequencies are far too low to be heard by humans, so they have been increased about 10,000 times.

The sound is something new and exactly the kind of surprising data the mission was supposed to pick up.

"This is exciting because it is completely new to us. We did not expect this and we are still working to understand the physics of what is happening," RPC principal investigator Karl-Heinz Glaßmeier wrote on the ESA's blog.

The Rosetta spacecraft is expected to continue orbiting 67P to collect further data and will remain operational for 12 years, although its primary mission ends in August 2015 when the comet reaches its perihelion with the sun. The Philae lander is a little less lucky. Having failed to secure itself after landing in the shadow of a cliff, the lander will receive instructions to "hop" into a sunnier position on the comet's surface so it can begin collecting the solar energy necessary to power it through its mission. If the operation is unsuccessful, it's game over for the mission, and Philae will go into hibernation.