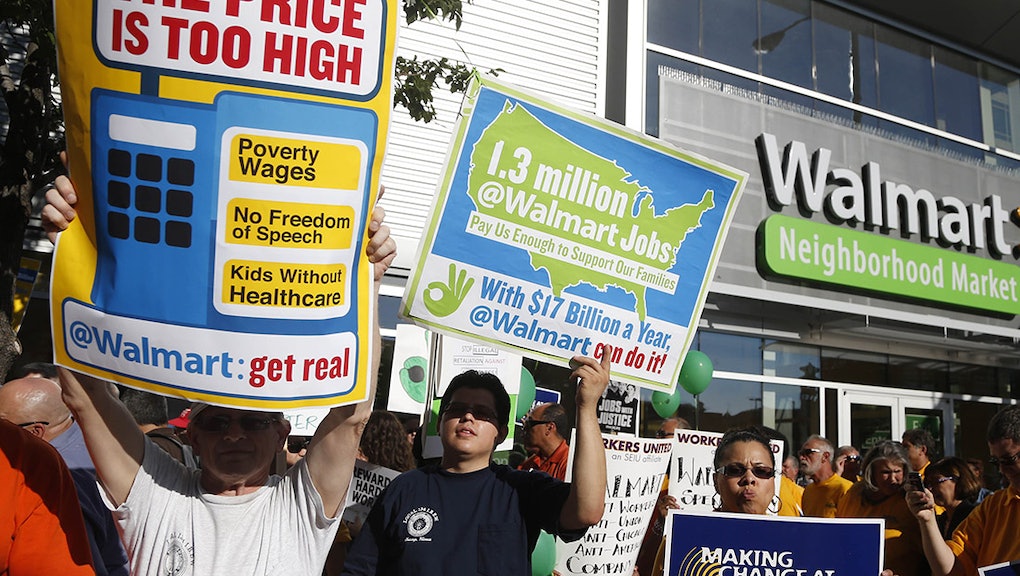 Black Friday, the favored holiday of masochists everywhere, is a perfect hell storm of consumer hysteria and corporate greed. This year, however, maniacal shoppers at America's biggest chain store will be joined by another group of people: protesting employees.

OUR Walmart, a nonprofit whose goal is to "gain respect for all Walmart Associates," announced on Friday that it expects protests and strikes at 1,600 Walmart locations nationwide. That number represents a strong increase from last year, when the group organized protests for 1,200 to 1,400 stores.

Barbara Gertz, a Walmart employee from Denver, told ThinkProgress that OUR Walmart has received calls "every day" from employees who want to participate. ThinkProgress also reported that employees at more than 2,100 stores across the country have signed an online petition demanding higher wages and improved working conditions.

"Every time one of us speaks out for change, we take the risk that Walmart will fire us. That's not right and that's not legal. That's why we're going on strike," Gertz told ThinkProgress.

The Denver store is one of many that will be participating in early Black Friday sales, which typically begin on the night of Thanksgiving. Though working on the holiday itself is enough to warrant protests, workers are rallying against the Walmart behemoth as a whole. (The protests occur year-round, though they're usually the most visible on Black Friday.) CNN reported that protesting workers want at least $15 an hour in pay, more scheduled hours and more consistent schedules.

As for the claim of punishment from Walmart if workers speak out, company spokeswoman Brooke Buchanan told CNN, "There's nothing further from the truth." (Mic has reached out to Walmart for comment, but had not heard back at the time of publication.)

The protests appear to be gaining momentum, however. On Thursday, workers staged the very first sit-in strike at a Los Angeles-area Walmart, chanting, "Stand Up, Live Better! Sit Down, Live Better!" before sitting down. They also wore tape over their mouths to symbolize the "illegal efforts to silence workers who are calling for better jobs," according to a press release.

Barbara Gertz conceded that the company had made some changes — a planned increase in wages to bring workers over $7.25 an hour, a redo of its scheduling program — but told ThinkProgress that "associates are still struggling and our stores are still understaffed."

With competitors like Costco making news for the opposite reason — treating its workers like humans and giving them Thanksgiving off — Walmart comes off looking even worse.

"The constant struggle Walmart has created for families is not acceptable," Stephanie Ly, the president of AFT New Mexico, told ThinkProgress. "It's also holding back the next generation from the opportunities and fair shake they deserve."