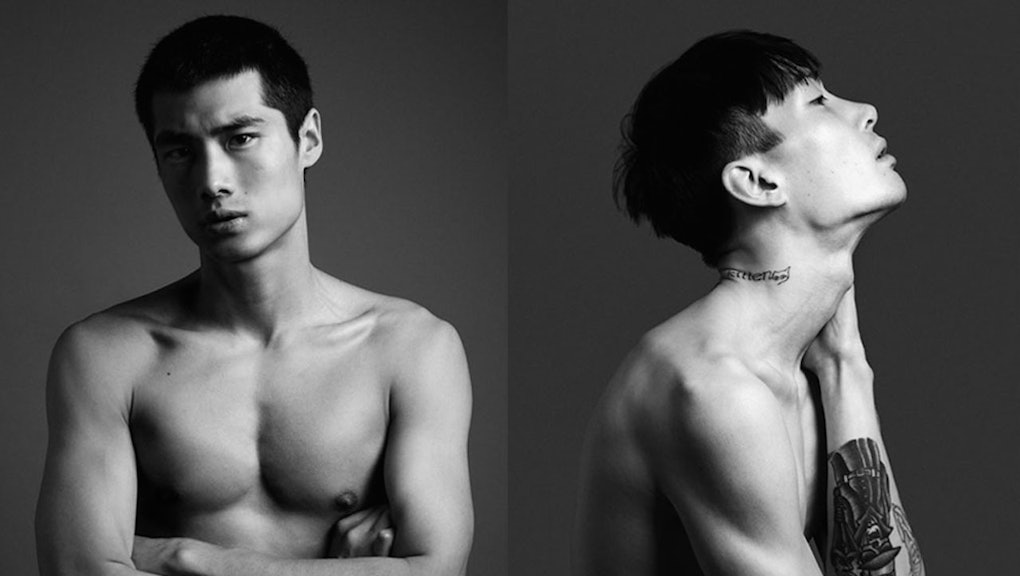 What makes a man handsome?

Americans have debated this question for years, whether in magazine pages, online listicles or more intimate wars between themselves and the mirror. Scientists have weighed in with equal verve: Is attractiveness measurable, a matter of facial symmetry and body fat percentage? Or is it subjective in ways that are much harder to calculate?

Whatever your opinion, few can argue that these metrics are inclusive. The American beauty standard is undeniably a white standard, and people of color are bombarded with words and images that celebrate features they, as a matter of genetics, do not possess.

It's part of why Idris + Tony, a Brooklyn, NY-based fashion photography duo, embarked on the Persuasian project earlier this year.

Originally conceived as an outlet to depict Asian men in a way most American media won't — i.e. as unabashedly masculine, sexual and desirable — the series was featured on Models.com in July and garnered significant buzz among fashion industry insiders.

But Persuasian is more than just a feel-good story about diversifying beauty standards — it's a deeply personal and empowering testament to the importance of self-esteem.

"I grew up in a very rural town," Tony Craig, one half of Idris + Tony, said in an interview with Mic. Growing up with an Asian mother and a white father, he explained that the perception of Asian maleness in his community was one of "complete [inferiority]."

"[Asian] masculinity wasn't acknowledged," he said. "It was stripped away ... And the way Asian men are depicted in popular culture, [we're] never the object of desire ... we're still very much 'just a friend.'"

Evidence for this claim abounds in American culture. Asian men in the U.S. are saddled with a troubling range of stereotypes: Whether framed as docile and submissive or rigid and emotionless, the perception is of a group so devoid of intimacy as to be certifiably sexless. Meanwhile, attempts to challenge this haven't been well received. The first TV show in recent memory to depict an Asian man in a romantic lead, ABC's sitcom Selfie, starring John Cho, was recently cancelled after 13 episodes.

Yet by framing Asian men as objects of desire, Idris + Tony aim to flip this narrative on its ear. These men are indeed sexual beings, they insist, and undeniably worthy of intimate attention.

"We wanted to show that you don't have to be a white person to be revered in this culture," Idris Rheubottom, who is black, told Mic. "Any culture that's not the majority here is seen as inferior, so it's cool to hear people [now] talking about which guy is good-looking, not just which Asian guy."

One could argue this objectification route fails to address a larger problem, that fixating on physical beauty can distract us from more substantive engagements with our fellow humans. However, as the photographers suggest, there's something to be said for valorizing a group that's traditionally been marginalized in this realm — even if its marginalization doesn't intersect with a comprehensive range of issues.

Case in point: "I've always had negative self-image because of my Asian heritage," Tony said, "even though I started out as a male model ... I would not give Asian guys the time of day, nor was I attracted to them in the same way I've been attracted to other races."

The Persuasian project, then, was cathartic for him: "These Asian men [mostly models born and raised in countries like Taiwan, Korea and Japan] are coming in, and we start shooting them to put them on file ... [and] there's something I noticed in them that I hadn't seen in Asian men before, or even myself ... I think this work [can persuade] Americans to look at Asian men differently."

Ultimately, the series remains a work in progress, but Idris + Tony are encouraged by its reception so far. They see it as a potential challenge to the entrenched and often subconscious racism plaguing the fashion industry as a whole, which they say privileges whiteness in the name of demand economics.

To date, it's unclear if fashion tastemakers are actually as committed to diversity as recent trends suggest. But Persuasian strikes a powerful blow against the existing paradigm: The more people see it, the more opportunity it has to imagine a more inclusive standard of beauty, and the revived notions of self-esteem and positive self-image that come along with it.

All images courtesy of the photographers. You can see more of Idris + Tony's work on Instagram, online, Facebook, Twitter and Tumblr. Their upcoming project, the Bastard Fanzine, can be viewed here.