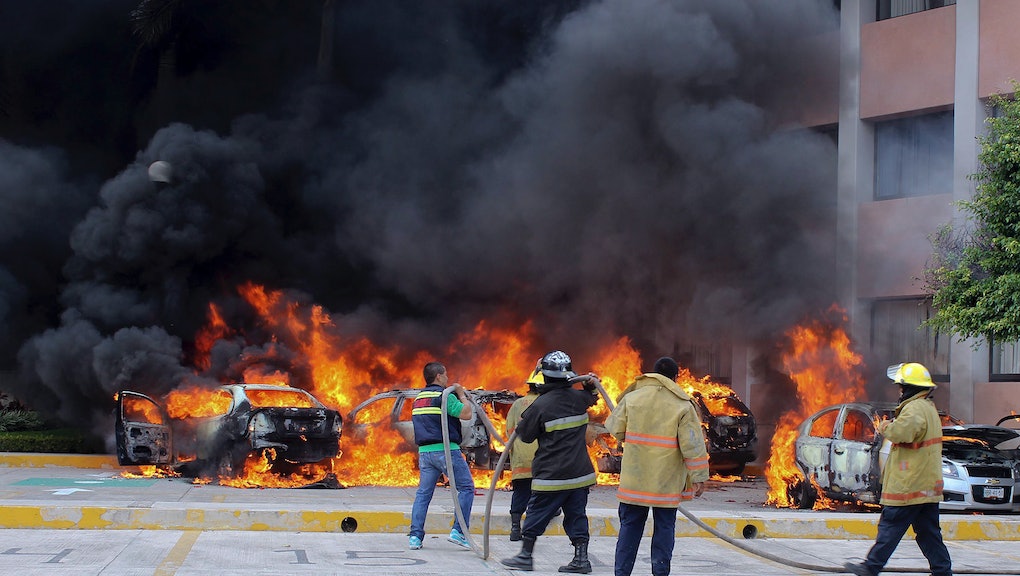 Powerful Photos Capture the Growing Crisis in Mexico the U.S. Is Ignoring

Mexico is on the verge of crisis.

Thousands of Mexicans have taken to the streets around the country to demand justice for the 43 missing students abducted and brutally executed by corrupt police officers and gang members in September. While angry students and teachers have poured into the streets over the past several weeks, the revelation of the students' final fate last week has pushed tensions to a boiling point.

The New York Times reports that thousands of demonstrators, primarily students, have flooded the streets of Mexico City and neighborhoods across the country, blocking major intercity highways and setting fires to government buildings.

While Mexicans have been demanding justice for the 43 missing students for weeks, the demonstrations have taken a violent turn. In Chilpancingo, the capital of the students' home state of Guerrero, members of a teachers union set fire to the session hall in the state assembly building while also torching several cars outside, Reuters reports. According to Reuters "violent demonstrations rocked several other states outside of Guerrero, where protesters blocked an airport and damaged the local office of President Enrique Peña Nieto's ruling party."

"The roots of the protests predate the horror in Iguala and the Peña Nieto administration. They are, in a sense, the latest phase of the historic struggle between Mexico's student left and the federal government, one that has been brewing for years if not decades," writes Foreign Policy's Laura Carlsen. "But this time the fury has moved out of the left-wing teachers' colleges and restive southern states and into the rest of the country."

"The violent disappearance of 43 students from the Ayotzinapa teachers college in Guerrero state has caused a political earthquake the likes of which Mexico has not seen in generations — perhaps even since the revolution of 1910," writes Loyola Marymount University literature professor Rubén Martínez in the Los Angeles Times.

There's one big problem: Americans don't really care at all.

Anger and outrage has been building across Mexico for weeks. Earlier in November, authorities arrested Iguala Mayor José Luis Abarca and his wife, Maria de los Angeles Pineda, who are believed to be the masterminds of the disappearance. Authorities claim Abarca ordered the attacks because the mayor presumed the students were planning to interrupt one of his wife's upcoming speeches.

Last week, gang members confessed to torching the remains of the students in a massive inferno near the city of Iguala before stuffing the remains into bags and disposing of them in a river. Authorities have also arrested 70 suspects, among them dozens of police held in connection with the crime.

The scale and brutality of the atrocities committed against those 43 students "makes it all the more baffling how little attention most people in the U.S. have paid to the unfolding tragedy," writes Martínez. "To understand the historical significance — and the moral and political gravity — of what is occurring, think of 9/11, of Sandy Hook, of the day JFK was assassinated. Mexico is a nation in shock — horrified, pained, bewildered."

But despite America's political fixation with Mexico in the context of immigration — "securing our border" being a favorite slogan for politicians on the campaign trail — very few elected officials or media outlets seem invested in what's could grow into a "Mexican moment."

So why doesn't the U.S. care? Part of the problem is that our attention — by politicians, by media outlets and by sheer apathy — is often focused on more distant but existentially frightening problems like the Islamic State, which, by most measures, is a far less dangerous and imminent threat than the cartels, corruption and violence brewing just south of our border.

"But beheadings, massacres and wholesale killings are not limited to IS brutality, and these militants have overshadowed a crisis taking place in a country that can be seen from U.S. backyards," explains Mic's Coleen Jose. "Americans remain largely unaware of the thousands killed by cartels every year in Mexico, and the violence doesn't end at the border: According to Narcosphere, a website tracking drug-war violence in the U.S., as many as 5,700 Americans were killed on U.S. soil from 2006 to 2010."

"Mexico is on the brink," signs Martínez, "and America is largely oblivious."

Mexicans are flooding the streets to show corrupt officials and the country's vicious cartels that they will no longer remain apathetic. Some international observers wonder when the U.S. will do the same.

"It has become something of a truism to point to how deeply the United States is implicated in the drug war. American demand, Mexican supply. American guns, Mexican bloodbath," argues Martínez. "And yet the merciless violence south of the border — which Mexicans now see as the state mutilating its own people — makes it easy to think of the drug war as Mexico acting out its dark obsessions. What Americans can't face is precisely that we've broken bad together with Mexico: that corruption is a binational affair, extending to rotten apples among our Immigration and Customs Enforcement agents and to an American political class that cynically keeps in place the amoral machinery of the drug war."

"On Thursday, Nov. 20, the civil society movement will celebrate the 104th anniversary of the Mexican Revolution with a national day of marches and work stoppages," concludes Martínez. "Will Americans notice?"

An earlier version of this article cited Reuters reporting, but did not include quotations around the cited passage. The story has been updated to fully attribute the Reuters' language.