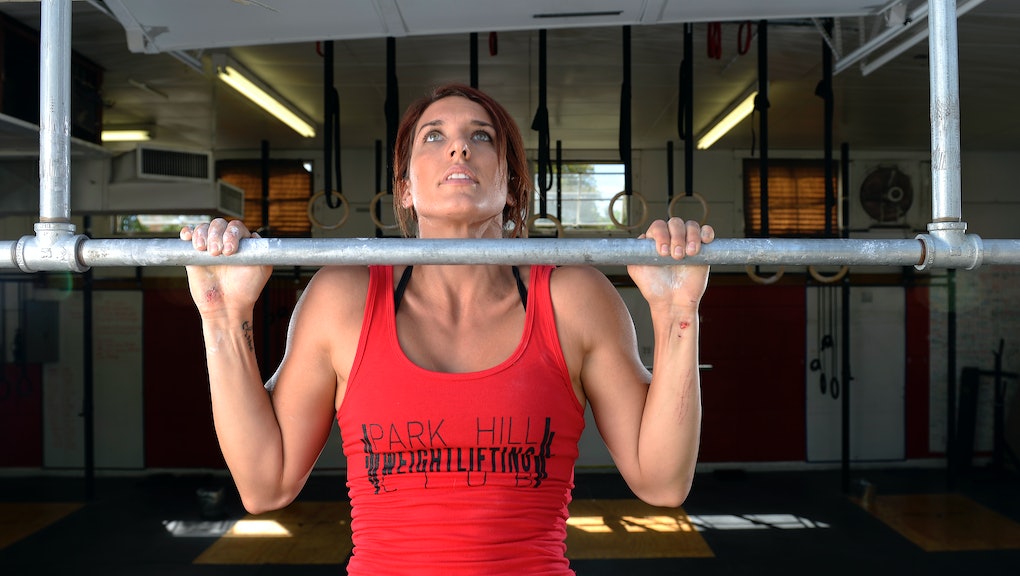 Eminem's "Lose Yourself" plays in the background as I struggle to get my head over the bar. My arms are starting to lose strength as each pull-up becomes increasingly difficult. Each push-up gets harder to execute, and there are long pauses between my air squats.

I am in an introductory CrossFit class in New York City, and these are the struggles I'm facing.

While this session is nothing compared to the intense CrossFit Games, I got a small taste of the culture surrounding the workout phenomenon that focuses on the "relationship between technique and functional movement, power, and fitness" through intense strength and conditioning. Founded in 2000, CrossFit started to grow in 2007 with the first CrossFit Games; the popularity skyrocketed after the games aired on ESPN in 2011.

The CrossFit movement has become global. As of August, the franchise had over 10,000 affiliated gyms, or "boxes" as they're called. Some of these branches are in the most unexpected of countries, such as Lebanon and the United Arab Emirates, according to the CrossFit website.

But with popularity comes scrutiny. As people started to praise the "kick-ass" regimen, horror stories surfaced of people getting seriously injured while doing CrossFit. As early as 2005, a New York Times article entitled "Getting Fit, Even If It Kills You" examined CrossFit's intense nature, zeroing in on the high-octane movements and spotlighting rhabdomyolysis. The dangerous medical syndrome affecting muscles is just one of the more talked-about dangers associated with CrossFit.

One ESPN investigation cited examples of individuals who hurt themselves during exercises common in CrossFit classes, including one freak accident that left one man paralyzed, while another man's accident left him with a cracked skull. Both of these serious injuries, though not technically incurred at an official CrossFit gym, resulted from people overexerting themselves and/or faltering in technique.

But is CrossFit actually dangerously reckless? Should we be so terrified? One class can't reveal all, of course. But I went to see for myself at CrossFit NYC's "Black Box" facility, which claims to be the largest and oldest CrossFit affiliate in New York City.

So here's how the class went: The instructor opened the class with approximately 20 minutes of discussing the regimen, emphasizing numerous times the importance of proper technique and "scaling" down in any CrossFit exercise.

We warmed up for about five minutes with a series of jumping jacks, high knees and butt kicks. Pretty simple.

After a water break would be the big test, the "half-Cindy," which is a rep of five pull-ups, 10 push-ups, 15 air squats — and doing as many as possible for 10 minutes.

Nick, the instructor, first broke down the proper technique for each move, while reiterating the importance of technique and never sacrificing form in order to get "as many reps as possible," a CrossFit goal. He also stressed how scaling back — say, using an elastic band to ease the difficulty of the pull-up or using an elevated bar to ease the difficulty of the push-up — could help if the exercise became too difficult.

I'm in decent shape, but boy, my body ached after those 10 minutes. I was pushed to the limit — I couldn't lift my arms above my shoulders, and I was feeling the burn.

But I never felt unsafe. During those 10 minutes, Nick pushed and motivated the group but with reminders about proper form and scaling down as necessary.

"As a coach, we spend a lot of time watching people and their movement," Mikel Blount, a coach at CrossFit X-Factor, told Mic in August, "making sure that people don't get hurt. Making sure that you're lifting something you're capable of lifting. You're doing things in the best way possible so you don't get hurt."

I found that CrossFit participants must know their limit and maintain proper technique if they want to avoid injury. The same can be said for any other other type of workout or physical activity. In fact, Bloomberg Businessweek cited a survey from the National Strength and Conditioning Association that showed when it comes to injury rates, CrossFit is no more dangerous than sports like gymnastics and Olympic lifting — and it has lower injury rates than contact sports such as rugby.

"The biggest thing when it comes to CrossFit that people don't quite understand is, it's not about intensity," Joon Howard, a Portland, Oregon-based coach at CrossFit Stumptown, told Mic. "It's governed by the person and their abilities."

Judging from one class, CrossFit will push you, but like anything else in life, you have to know your body's intensity threshold. Doing the moves right is also crucial for safety, and CrossFit heavily emphasized technique — after all, few workout classes begin with 20 minutes of verbal instruction.

The "don't stop" mentality is the dangerous thing that may lead to injury. As Eric Robertson, a Regis University physical therapist, told the Washington Post, the danger comes from encouraging exertion that goes beyond a person's safe limits.

"People tend to brag about the injuries that they got. They post pictures of their hands all torn up from lifting the weights, and it's like a badge of honor," Robertson said.

But for a newbie simply doing the exercises, CrossFit is arguably no more dangerous than any other sport when following the instructor's lead on both technique and safe limits, as long as you don't blow right past those limits.

In fact, the most dangerous part of this workout might be the monthly cost that destroys your wallet — but that's a conversation for another time.