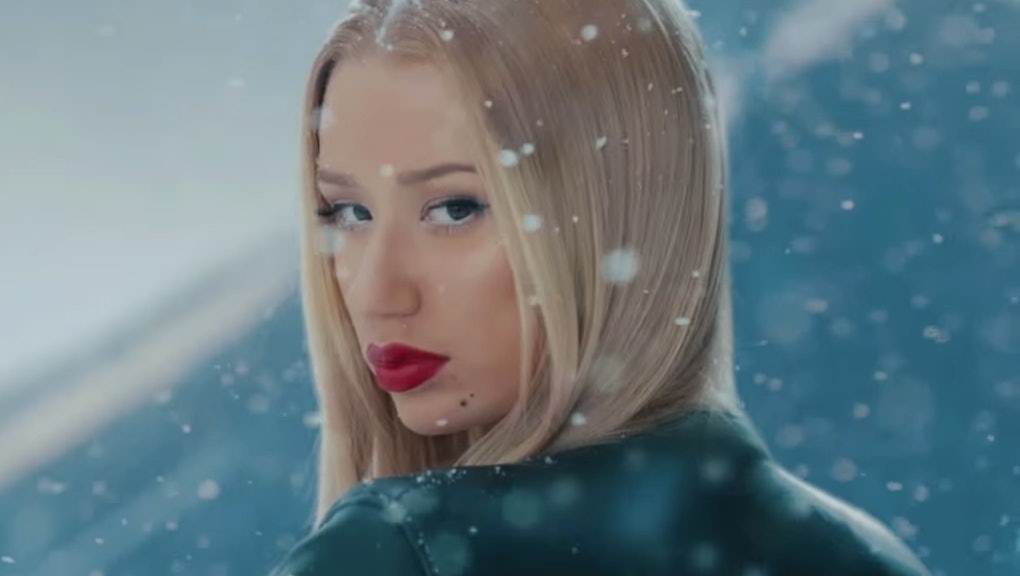 We need to talk about Iggy Azalea's "Black Widow."

The song has been out for a little while now, and in that time it has managed to become the ninth most popular song in the country. There's one catch, though: It's arguably the worst song on the top 10 right now, and its success is only proof of how bad pop music has gotten. "Black Widow" is the most derivative song of 2014. And it's succeeding only because it's intensely formulaic.

The song is bad for a multitude of reasons, but it is especially offensive because it's almost identical in theme and sound to Katy Perry's megahit "Dark Horse." It also fits the model of Azalea's other hits so exactly that the music video is practically the same: Just as "Fancy" was modeled on Clueless, so too is "Black Widow" modeled on Kill Bill. As Aliza Abarbanel pointed out in Noisey, "Iggy should be careful with how much she imitates. This is her first solo song since 'Fancy' became the hit song of the summer and it doesn't do much to define her as a unique artist."

But the song was never meant to be original. "Black Widow," featuring singer Rita Ora, was clearly released in the hope that it would skyrocket to the same "song of the summer"-level fame as Azalea's previous hit single, "Fancy." That song features British singer Charli XCX and held the number one spot on the Billboard charts for seven consecutive weeks. But it isn't Azalea's fault; to a large extent that's just how pop music works now. People identify hit sounds and formulas, and then they hit them again and again.

For example, "Fancy" topped the charts, but it seemed many hated it. The song succeeded, though, because it was clearly identifiable as a hit: a popular style (hip-hop) made palatable for mainstream white audiences by an artist who was beginning to trend. Because it seemed like a safe bet, it was placed in iHeartRadio's new "On the Verge" program. That program takes artists that the company thinks will hit it big and then requires every station in the Clear Channel network to play it at least 150 times, the Washington Post reports. Clear Channel has 840 stations and about 245 million listeners, so when they choose a song to play on repeat, much of the country will hear it at some point. That breeds familiarity in listeners, and familiarity breeds hits.

Azalea's promotional strategy follows that to a T. And it isn't just her. Derek Thompson wrote in the Atlantic  Tuesday about "the Shazam Effect" — the paradigm shift in the music industry that has an increasing number of creative decisions being made in order to give people more of what they already know they like. Psychologists call it "mere exposure effect." Aeon magazine explained: "It seems then that people can easily mistake the fluidity of their ability to identify and fully comprehend a song with actually liking it."

This is what Azalea's camp gets better than anybody else.

And it's why such a phenomenally derivative song has made it so far. But what's saddest about the success of "Black Widow" is that an artist like Azalea is capable of far more. All it takes is one listen to "Work" to see what she can do at her most dynamic. That's why it's important to be aware of this sort of tendency in pop music. It may make songs into hits, but it turns good artists into nothing more than hit-makers.