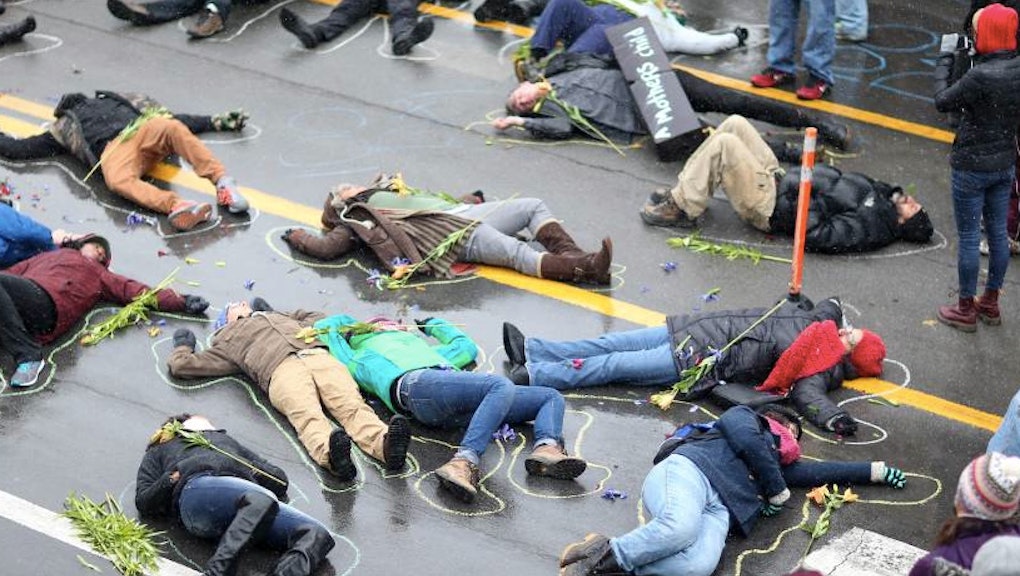 On the eve of a grand jury decision in the case of Ferguson, Missouri, police Officer Darren Wilson, who fatally shot 18-year-old Michael Brown in August, protesters have done anything but sit and wait.

Braving the cold and the snow, more than a hundred people gathered on the streets of St. Louis Sunday, temporarily blocking a major intersection in the process. Reuters reported that dozens of people staged a "die-in" — which involved some protesters pretending to have been shot by others acting as police officers — as a way of honoring Brown's memory.

"This is a mature movement. It is a different movement that it was in August. Then it just had anger, justifiable anger," DeRay McKesson, a protest leader, told Reuters. "Now we are organized. We are strategizing. And we are going to bring our message to the power structure."

Though protests have remained relatively constant since Brown's death on Aug. 9, they've received renewed attention as the city braces itself for the grand jury decision in the coming days.

Many believe Wilson will walk. The New York Times noted that "the groups are preparing with intricate precision to protest the no-indictment vote most consider inevitable." And stories emerging from Ferguson, one of which quoted a resident as saying, "We are getting prepared for war," seem to back this up.

"We are bracing for that possibility. That is what many people are expecting. The entire community is going to be upset [if Wilson isn't indicted]," Jose Chavez, a group leader, told Reuters.

What could happen after the verdict? If the jury doesn't indict Wilson, he could conceivably return to his post. "I am not saying that I want Officer Wilson to return or that I don't want him to return," Ferguson Police Chief Tom Jackson told MSNBC. "Legally speaking, if he is not indicted he can return to his job. If he is indicted on felony charges, which these would be, he will be fired."

It's still unclear how protesters will respond should Wilson be cleared of wrongdoing, but the possibility of violence appears real. Other cities, too, are preparing for protests, with police in California and Boston readying themselves for demonstrations.

"Rioting and looting are the tools of those without a voice," Rockit Ali, who helped organize Sunday's demonstration, told Reuters. "The rioting and looting, while I didn't participate in it, was necessary. Without it we would not be standing here today. There is no revolution without violence."