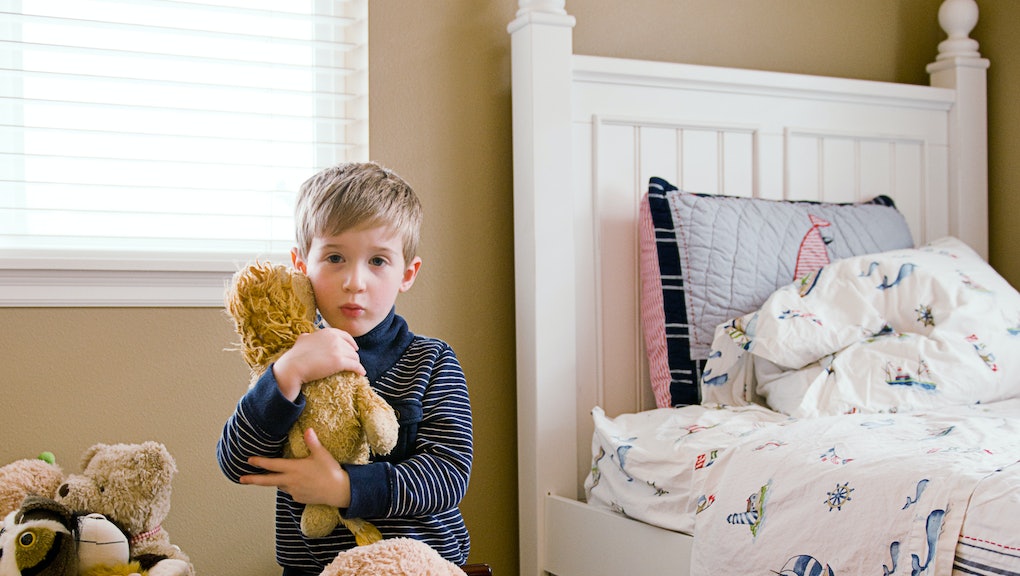 Everyone remembers an object they were attached to as a child, from the blanket they couldn't sleep without or the stuffed animal they'd embrace when tears took over.

But today's children live in an age of iPads, smartphones and apps for learning. It's not uncommon to see a child tapping the screen of a tablet in order to practice multiplication tables or preoccupied with a parent's iPhone games. A 2013 study found that 72% of kids 8 and under surveyed have used mobile media and 17% used a smartphone, iPod Touch, tablet or similar device everyday. That was up from 8% in 2011.

Seattle photographer Anna Ream's project "Comfort Objects" shows that today's kids aren't completely consumed by media.  She has captured today's children with the blankets and stuffed animals that they hold dear. The images are a candid look at the bonds between child and material possessions. Dr. Donald Woods Winnicott introduced the idea of transitional objects ("comfort object" in psychology language) in the 1953 paper "Transitional Objects and Transitional Phenomena — A Study of the First Not-Me Possession." These belongings help children transition out of being dependent on their mothers.

Ream, whose work tends to center around her children, was inspired by a fellow student at the Photographic Center Northwest who shared that her favorite picture was a photograph of a favorite chair she had growing up. Ream, a mother of three, set out to initially photograph just the object, but realized that what really made the photos was the kid interacting with the object.

"The way I approached finding children and asking parents if their kids have comfort objects, they automatically respond with the recognition," Ream told Mic. "'Yes! It's a stuffed lion and he calls it Leo.' I wanted to find kids that had that kind of connection. They needed it to go to sleep or when they needed comforting."

Ream found that most of the children in her series gravitated toward softer objects. It wasn't a specific exclusion. She did come across one boy who had a pile of model cars, but the majority of youngsters had relationships with plush items.

The financial adviser-turned-photographer has been working on the series since 2012 and has photographed more than 70 children. "Comfort Objects" has also helped her explore her artistic vision.

"I have found that going through this project, it was both working through those layers of why I am interested in this subject matter and what it means to me, and peeling that away layer by layer," Ream said. "What is so fascinating to me is the idea that you can have ideas and things that are important to you and figure out a way to express them visually that is really compelling. That's forced me to consider issues and current events and engage the world around me in a different way."

Though Ream received her certificate in fine art photography from the Photographic Center Northwest in June, she's not done with "Comfort Objects" and eventually wants to turn the project into a book.

Although today's children are growing up in a media-saturated world, they still find comfort in the things that older generations did. A study from Northwestern University found that parents are still more likely to turn to a toy or book than rely on something like a tablet to calm their upset child.

Ream's family has an iPad, which they use to for teaching purposes. "One of my daughters was struggling with learning the alphabet, and there's some apps that serve great educational purposes," she said. "I do think it's really great to take a break from them. There are things that you miss in engaging with the world."

With media usage by children on the rise, it's about finding balance. There's iPad time and then there's old-fashioned playtime with dolls and stuffed animals. At the end of the day, a soft blanket is easier to cuddle with than a piece of metal — not to mention it more easily absorbs a temper tantrum's tears.