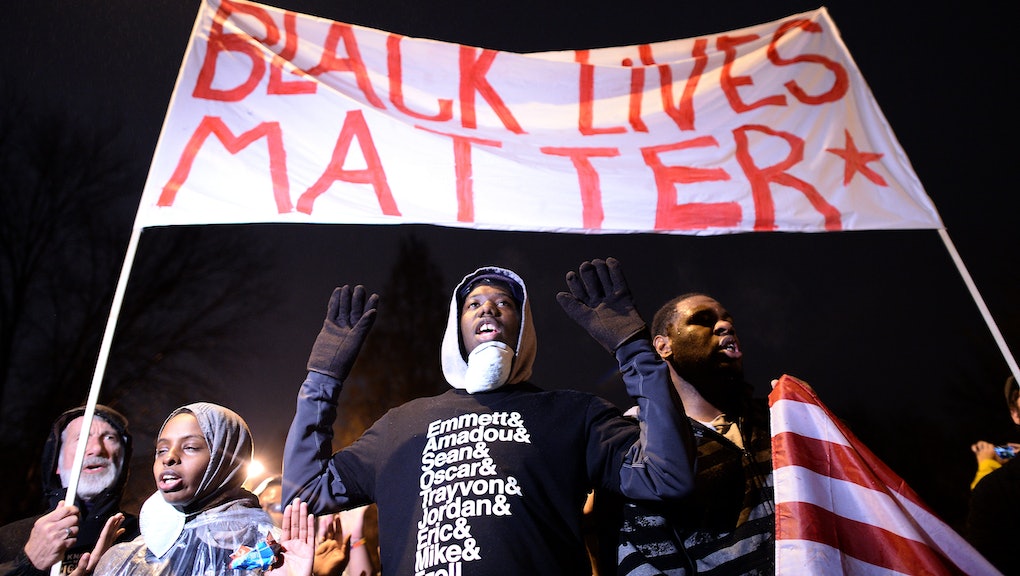 Protests are planned in Ferguson and across the country, and many more will come. But the broader system of surveillance and repression that set the stage for Brown's harassment and killing will remain intact in Ferguson — and for men of color across the entire United States.

Wilson's finger was on the trigger that day, but it was only one of many forces that pulled it. Brown's death was the outcome of a constellation of institutions that paint black men as suspects and targets the moment they're old enough to leave the house on their own.

Life as a target: In the U.S., race determines whether you're viewed as a citizen or a problem. In 2011, the number of times the New York Police Department stopped young black men exceeded the number of young black men in the city. Nationally, a black person is four times more likely to be arrested for having marijuana than a white person, even though they use the drug at similar rates. Young black males are 21 times more likely to be shot dead by police than their white peers, mainly at the hands of white police officers.

This methodical discrimination is underpinned by a systemic imperative for police officers to continually become a more invasive force in American life. In recent decades, the legal pretext for accosting or searching anyone police deem suspicious has been slowly ground away, to the point that it's effectively nonexistent in many contexts. The drug war's financial incentives for police have tangibly altered arrest rates. A puritanical attitude and draconian punitive scheme for minor drug possession has transformed communities of color into treasure hunts for police desperate to fill quotas.

This has resulted in what Michelle Alexander, an acclaimed civil rights lawyer, legal scholar and author of The New Jim Crow, has termed a "system of social control unparalleled in world history." No other country in the world imprisons as many of its own ethnic or racial minorities. In fact, the U.S. currently incarcerates a far greater percentage of its black population than South Africa did under apartheid:

More black adults live under correctional control today — in prison or jail, on probation or parole — than under slavery in 1850, a decade before the Civil War began.

Black men not only encounter constant surveillance, violence and shockingly high chances of correctional supervision for matters that the rest of the population does not, but they also then face discrimination in housing, employment, financial services and political rights after they exit prison. This discrimination ensures their exit is often tortured or short-lived.

The sum effect of this is bigger than just disproportionate difficulty in pursuing a normal life. It renders black men a special kind of underclass in American society.

"The fact that more than half of the young black men in many large American cities are currently under the control of the criminal justice system (or saddled with criminal records) is not — as many argue — just a symptom of poverty or poor choices, but rather evidence of a new racial caste system at work," Alexander wrote in The New Jim Crow.

Change is needed: The institutions and culture that extinguished Brown's life and many more before him can be changed. Instead of investing in ways to monitor, repress and incarcerate a large segment of a historically oppressed population — in 1996, the penal budget in the U.S. was twice the amount devoted to aid to families with low income or food stamps — the United States can invest in actual solutions such as affordable housing, equal access to quality education, fair employment opportunities, a demilitarized police force, and the like.

This country must reckon with its grotesque inequality and deeply inadequate social services instead of abandoning whole segments of its citizenry and then locking them up for not managing to flourish. The system of mass incarceration has been a choice, and it's been the wrong one.