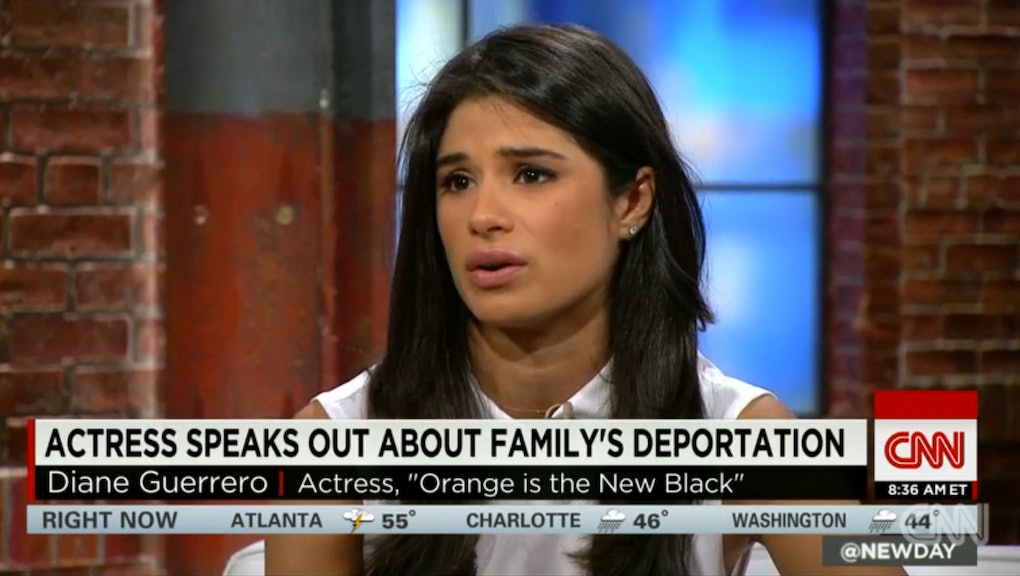 Imagine coming home from school one day to find your parents are completely gone. And not because they're both out shopping or involved in some freak car accident, but because they were taken away and deported by immigration officials.

This is the harsh reality Orange Is the New Black actor Diane Guerrero faced at the early age of 14. Guerrero, who is a child of Colombian immigrants, went on CNN to discuss in detail the day her life was shaken upside down.

"I got home, and their cars were there and dinner was started and the lights were on, but I couldn't find them," Guerrero said while on the verge of tears. "You know, my parents are going to jail and for what? I didn't consider them criminals."

Unfortunately, Guerrero's story is not an isolated circumstance, as the New York Times reports:

About 200,000 parents of children who are American citizens were deported between 2010 and 2012, and 5,000 parentless children are now in foster care because their mother or father was detained or deported. An analysis by the Applied Research Center estimates that more than 15,000 children would join them by 2016 if record numbers of deportations continued.

More than 70% of immigrants are of Latino descent according to Homeland Security, making them the demographic most targeted by immigration services.

With the United States expecting about 90,000 unaccompanied immigrant minors to be stopped at the border in 2014 alone, President Obama tried to discourage other families from attempting the journey. And even though they don't want unaccompanied minors to cross the border, immigration policies like these have left many American children without parents.

Guerrero's story comes at an especially poignant time considering President Barack Obama's upcoming plan to sign an executive order that would protect up to five million undocumented immigrants from deportation. Despite facing serious pushback from House and Senate Republicans including House Speaker John Boehner (R-Ohio) who plans to "fight the president tooth and nail" on this issue, the president plans to move forward with this executive action.

A key part to this order would protect the undocumented immigrant parents of U.S.-born children from deportation, according to the New York Times, which would prevent families like the Guerreros from being separated.

And while this actress was able to overcome having her parents deported on her way to a successful career, no child should have their hard-working parents taken away from them in a matter of a few hours.