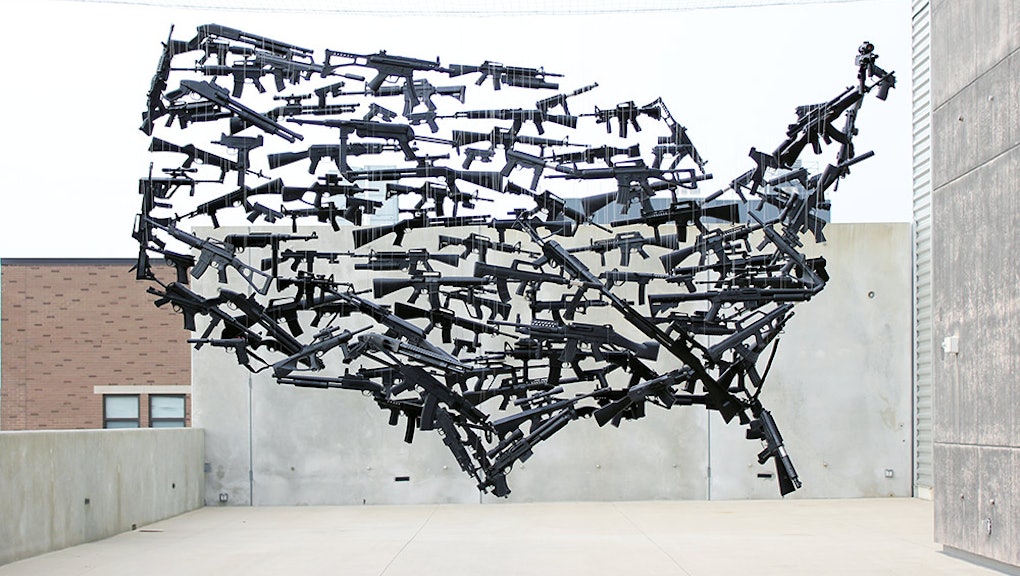 Art is all around us. It's in the floral print on the shirt of the girl on your train. It's in the architectural detailing of your office building, and in the pixels of your computer screen's background, which happens to be a photograph of your favorite hometown park. It's not just the stuff that fills the rooms of museums and walls of galleries.

But more than anything, art is a concept: It's an abstract idea embodied in a visual form that can drive meaningful and lasting social change. In offering a critique of the world's maladies, art has become iconic in distilling specific moments in history. It cements injustice into our collective memory, but also propels us to move forward.

Here are eight works of art out to change the world.

The story behind these papier-mache sculptures is more worrisome than cuddly. There are 1,600 figures to match the number of pandas existing in the world. French artist Paulo Grangeon wanted to bring awareness to the dwindling panda populations. Due to habitat destruction, the bears have found themselves on the endangered species list.

While urbanization is important to the growth of human civilization, it's also vital to be mindful of the life our growth harms. This project emphasizes the imperative of preserving habitats. "1,600 Pandas" has shown up in a variety of places, including the Netherlands, Italy, France, Germany, Switzerland, Hong Kong and Taiwan.

When this image went viral, it became known, incorrectly, as "politicians discussing global warming." While this installation might intersect with ideas of climate change, Cordal's figures actually symbolize the faceless men who control today's capitalist world. "Electoral Campaign" is part of a larger series named Follow the Leader.

The sculptures, which stand about six inches tall, fit into Cordal's bigger critique of the masses and how small actions might seem insignificant. But Cordal thinks precisely those small acts can make change happen. Hopefully his art can inspire confidence in everyone's work, no matter how small.

The almost-animated hazmat suits are creepy commentary on attitudes toward nuclear energy. There's lots of paranoia buzzing around radioactive waste, especially after the Fukushima power plant in Japan revealed it was leaking contaminated water.

"Radioactive Control" featured 100 illuminated figures marching through a field in Hamburg, Germany, pushing viewers to consider the world's use of radioactive energy. It might be a cheap resource, but it has lasting effects on humans and the environment if waste is not disposed of properly. The eerie installment is a grave omen for the possible results of the world's continual abuses.

Installed in New York City's Foley Square at the end of the 2008 presidential election, "Main Street Meltdown" offered a literal interpretation of the economy's meltdown. With recession on people's minds, the artists behind the ice sculptures erected them on the anniversary of the stock market crash of 1929.

While the icy "economy" melted away, hopefully the questions about how America will fix its financial state will stick around.

After a long list of tragedies involving firearms, gun control and violence became a hot topic of discussion for the nation. Using 130 toy guys, Michael Murphy brought the discussion to life.

According to his artist statement, Murphy intended to spark conversations about guns and gun-related topics. It'll take a lot more talking to find any kind of solution, but talking is definitely the first step.

"Freedom Candles" by Mark Landwehr and Sven Waschk of Coarse

These candles were made as a fundraiser for Amnesty International. Each portrays one of the missions to which the organization is dedicated. What originally starts as a rifle, a tied-up man and a victim of sexual slavery melts into a pen, a reunion between the man and his son, and an empowered young woman.

These pieces are literally transformative with the help of a flame. Tiny in size, they spark larger conversations about causes in the world that need more attention.

Sitting across the street from the Westboro Baptist Church, this piece of real estate fabulously battles homophobia. The owner, Aaron Jackson, runs the nonprofit group Planting Peace. One day while using Google Earth, he noticed the house's for-sale sign. Jackson has turned the building into an LGBTQ museum.

Since the house's grand reveal in 2013, it has hosted a flurry of queer events. It continues to remind us that people out there are combating hate, which can be done in an artistically fantastic fashion.

"The Fallen" by Andy Moss and Jamie Wardley

On June 6, 1944, 9,000 civilians, German forces and Allies lost their lives as part of the invasion of Normandy during World War II. In 2013, "The Fallen" remembered the lives that were lost by using stencils and rakes in the sand on International Peace Day. As the tide came over the beach, it washed away the imprints.

The memorial was both artistic and sweeping, while still being short-lived. Hundreds of people turned up to help create the piece.

From the environment to gun control, art can be a powerful way to communicate the need for change. Hopefully people will take what art can give them and learn from the projects that strive to bring serious issues to the forefront.