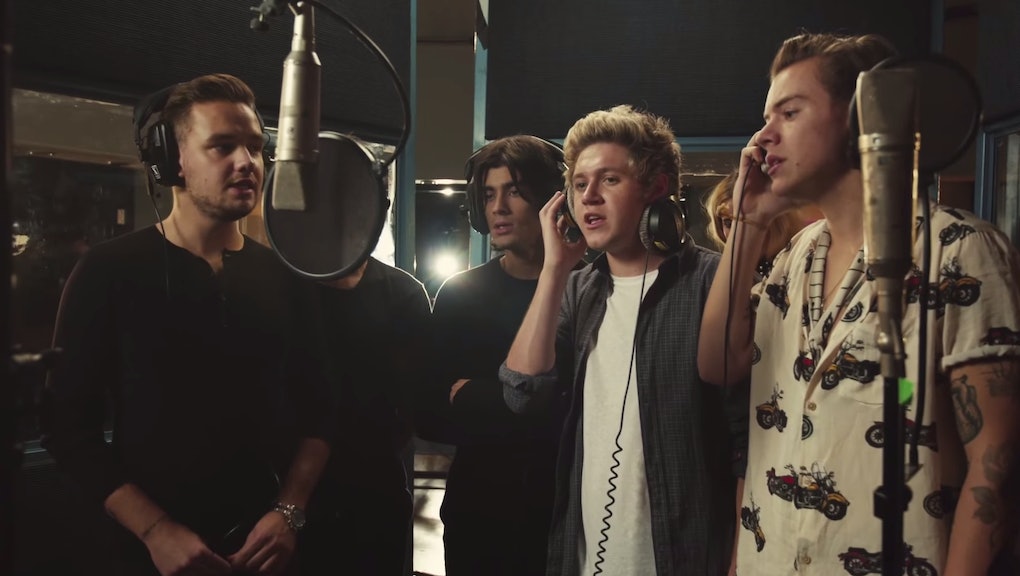 Decades after the first "Do They Know It's Christmas?" collected world-famous musicians to pity Africans, song cowriter Bob Geldof admitted that it was one of the worst songs in history. But four years later, Geldof resurrected the song — this time to help Africans dying of the Ebola virus. Released Monday, this latest version is still terrible.

Leave it to the cofounder of Live Aid to replicate what's become an insanely damaging charity cliche during the past few decades. Geldof rounded up One Direction, Bono and more than a dozen other pop stars (Adele reportedly refused) to re-record the 1984 song and reinforce the idea that Africa really just needs some Western star power to make things right. The feel-good project is directed toward a good cause, but it's so culturally tone deaf that it actively reduces the diverse experiences of African people to a basic racial trope: They live on a dark continent, waiting to be saved.

"Do They Know It's Christmas?" asks a question about a holiday that the majority of people don't even celebrate in countries affected by the Ebola virus. According to the Centers for Disease Control and Prevention, the three West African countries with widespread Ebola transmission include Sierra Leone, Guinea and Liberia — two of which are predominately Muslim, so the holiday probably isn't on the top of their minds. And the Christians in those countries say they do, in fact, know it's Christmas.

But for Geldof and Midge Ure, the two white men from the United Kingdom who wrote the song, it's easy to assume that everyone around the world is or should be paying close attention to a commercialized Christian holiday — and that if they aren't, they're in need of help. For a composition that's purportedly supposed to help Ebola-ridden countries, that's a shocking lack of actual awareness about the people you're saving.

The song was originally written to address issues of famine and hunger, especially in Ethiopia. The lyrics painted a culturally diverse continent rich in various natural resources as one monolithic wasteland filled with doom and gloom. Africa was described as a place where nothing ever grows and where the "only water flowing is the bitter sting of tears." Bono even belted, "Tonight, thank God it's them instead of you."

This time around, words that recall images of famine were instead replaced with sentiments rooted in common fears about Ebola. The stars sing of West Africa as a place where "a kiss of love can kill you, and there's death in every tear." It's indeed true that Ebola can be transmitted through direct contact with various bodily fluids, but that doesn't mean death is in every tear from a West African person. Sometimes, people just cry.

Adding insult to injury, images of aid workers in Hazmat suits carrying away an unknown, unconscious and barely clothed African woman from a bed soaked in fluids are sharply contrasted with rich and healthy pop stars emerging from flashy vehicles, pushing past the lights of the paparazzi and moving toward a recording studio — a place where their love can save, and there's only compassion in every tear.

Raising money for Ebola is a good thing — if it were necessary, raising awareness about Ebola would be good too. But "Do They Know It's Christmas?" is just as problematic now as it was 30 years ago. And in the process, Geldof and his collaborators perpetuated what Nigerian author Teju Cole has dubbed the "white savior industrial complex." Instead of focusing directly on the needs of West African communities and encouraging people to support them, the song reflects a thoughtless attempt at intervening in an otherwise complicated public health issue.

It's emblematic of a long-standing issue with Western humanitarianism that just won't go away — and it's an important reminder to be a lot more intentional before helping others who are suffering. Because if we haven't moved past this in the last 30 years, then there's a lot more the West should be worrying about than the tears of African men and women.