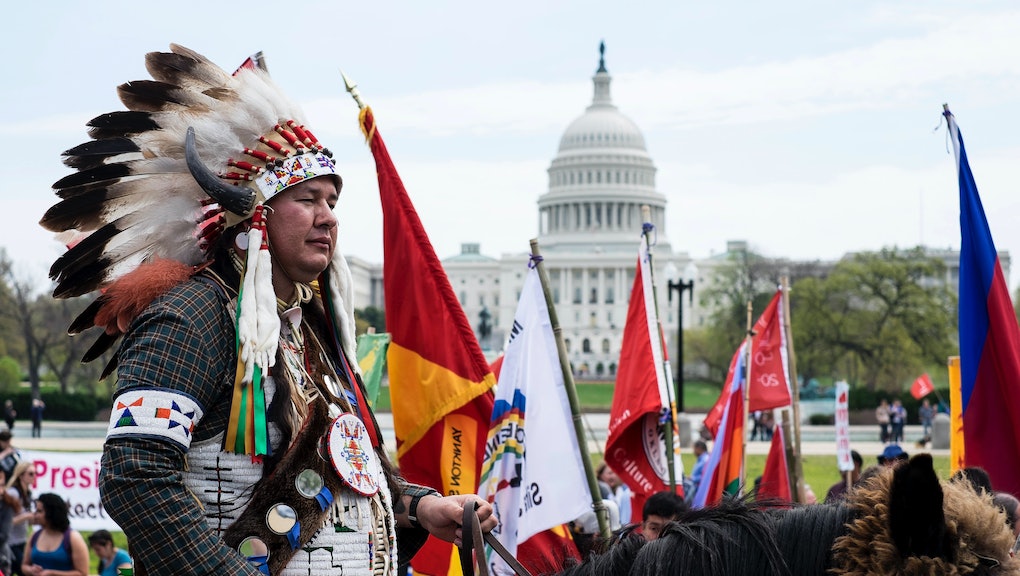 The president of a South Dakota Sioux tribe has taken a defiant stand against the construction of the Keystone XL pipeline, calling the recent House vote to authorize the project "an act of war."

"The House has now signed our death warrants and the death warrants of our children and grandchildren," Rosebud Sioux leader Cyril Scott said. "We need to start remembering that the earth is our mother and stop polluting her and start taking steps to preserve the land, water and our grandchildren's future."

Scott said his tribe will close its reservation's borders to block the pipeline's path, which is slated to run south-southwest from Alberta, Canada, to Steele City, Nebraska, then all the way down to the Gulf Coast. It will slice directly through Rosebud land — a violation, he claims, of the 1851 and 1868 Fort Laramie treaties.

The chart below shows the proposed path of construction:

The debate over the pipeline has cut an unusual path across the political spectrum. Democrats like Sen. Mary Landrieu (R-La.), whose state stands to profit from construction, are now pitted against President Barack Obama and others in the party who are troubled by potential environmental consequences.

The State Department and the White House believe they have final say on the matter because the pipes would cross the U.S.-Canada border, but Congress has been keen to push their hand.

Republican Bill Cassidy, who is likely to defeat Landrieu in Senate run-off election, was the lead sponsor for the House bill that has so angered Native American leaders. According to the Grand Island Independent, they began writing "tribal resolutions" against the project in February.

Scott's argument is a stirring one, rooted as much in those century-old pacts as a vision for the centuries to come. The reality is much more stark. The pipeline will deliver, along with the tar sands, billions in new revenues for the energy industry, which has its hooks in key members of both major political parties.

Though Obama could veto congressional action, Republicans, soon to have a stranglehold in both the House and Senate, are uniformly in favor of going forward. And, like with Landrieu, there are probably enough Democrats willing to make a deal.

The Sioux Nation have a hell of a fight ahead.