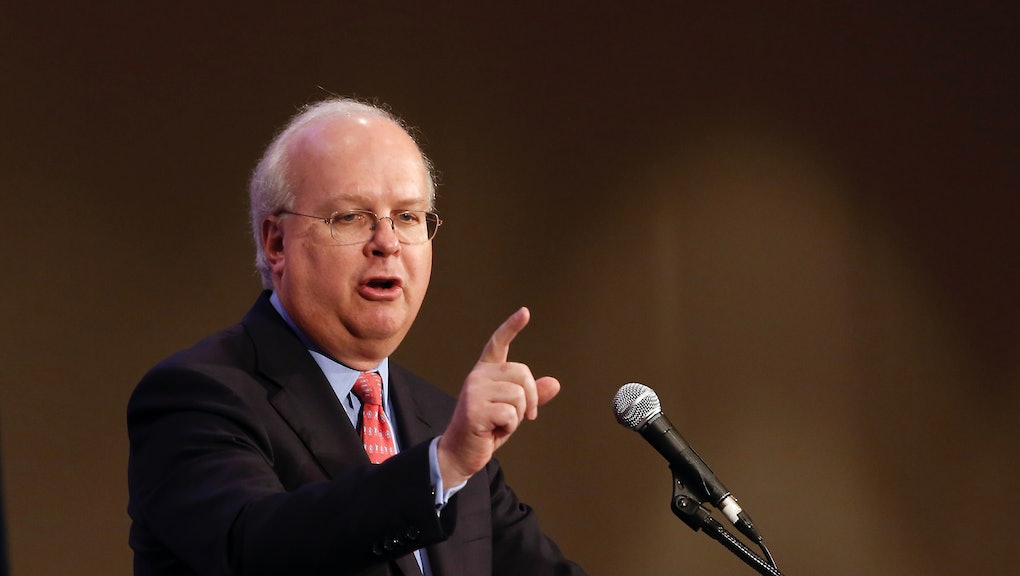 The 2014 midterms cost a staggering $3.67 billion — and $900 million came from outside spenders like super PACs, "527 organizations" and 501(c) nonprofit groups. Under normal election and campaign law, candidates and their committees cannot coordinate directly with these outside groups, but according to CNN, that didn't stop the Republican Party this year.

CNN reported how the GOP used the Internet, specifically Twitter, to push campaign finance laws to the limit during this month's election. By using anonymous Twitter accounts to share polling information with outside spending groups, the GOP may have broken the law.

How it worked: CNN reports an anonymous whistleblower alerted the network to the operation shortly before Election Day. A series of publicly accessible Twitter accounts were used to stream what looked like random words and numbers, looking like: "CA-40/43-44/49-44/44-50/36-44/49-10/16/14-52—>49/476-10s." But this so-called gibberish was actually geographically specific internal poll results invaluable to anyone planning an ad buy.

The offending accounts remained online until Nov. 3, when they were deleted after CNN contacted the National Republican Campaign Committee.

CNN reported the accounts were used to synchronize the operations of American Crossroads, run by Bush administration senior adviser Karl Rove, and American Action Network super PACs, chaired by former Sen. Norm Coleman (R-Minn.), with the National Republican Congressional Committee, according to the source. While American Crossroads and American Action Network together spent just over $30 million during the 2014 campaign cycle, this kind of information could have been used to unfairly inform super PACs where to spend their money.

Is this illegal? That's unclear. Major holes created in existing campaign finance rules by the Citizens United Supreme Court decision have made these laws increasingly complex. Since the accounts were public and thus technically accessible to anyone with the right know-how, the courts could agree there was no explicit coordination involved in the strict legal sense.

"If it truly requires some sort of Ovaltine decoder ring to make heads or tails of the information, then there certainly is the possibility that there was some pre-arrangement," former Federal Election Commission enforcement division chief Kenneth Gross told CNN. "Just making it public is not enough. You have to further meet the requirement of no pre-arrangement or coordination. But it is the burden of the government to demonstrate that."

If the allegations are true, FEC vice chair Ann Ravel said, it exposes a "murky" side of campaign finance in the information era. As the CNN report notes, this kind of ethically questionable activity is common on both sides of the aisle:

Earlier this year, for instance, the National Journal reported that Sen. Jeanne Shaheen, a New Hampshire Democrat, posted what appear to be ad scripts on her websites that Republicans say telegraphed messages the campaign would like to see on the air. In the North Carolina Senate race this year, Republican Thom Tillis' campaign posted a detailed memo on its website specifically laying out its needs for television and digital ad buys.

Why it's happening: It's no surprise that campaigns and super PACs would be eager to share the information. With the rise of massive spending in recent campaign cycles, Vox reported that campaigns are betting on expensive TV, mail and phone advertising rather than hard-to-organize canvassing operations that require a larger footprint. As "professionally managed, centralized, D.C.-based groups with weaker grassroots ties" begin to become more important than civic organizations like churches and unions, the kind of expensive advertising super PACs and other outside groups specialize in has similarly become more important.

Campaign spending is steadily increasing, meaning opportunities for shady operations like these are growing.

Whether this particular case is found to have violated campaign laws, don't be surprised if you see more of this kind of chicanery in the future.