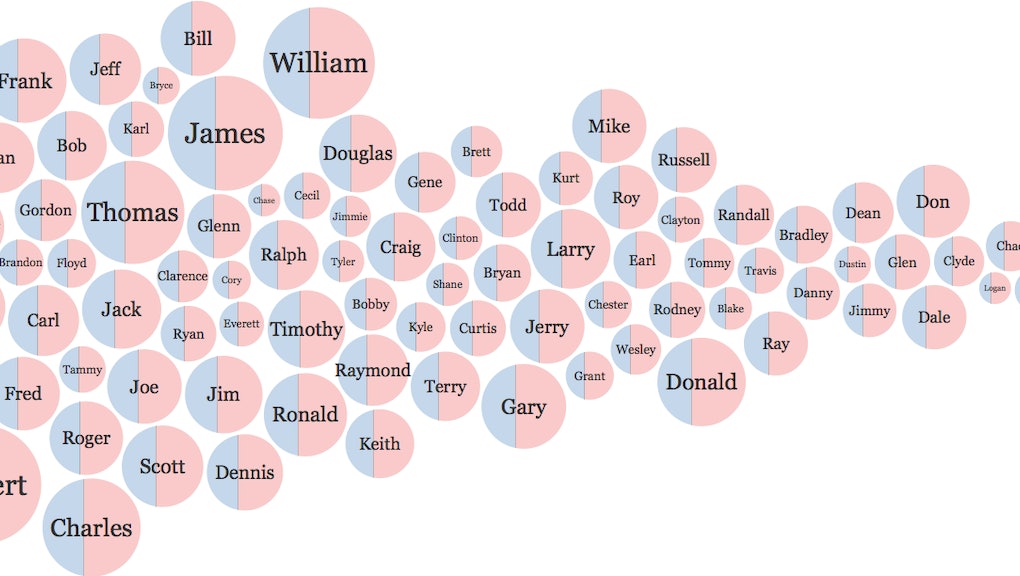 Your Name Reveals Something Surprising About Your Political Beliefs

Want a son destined to captain the debate team and have a suspiciously good haircut? Name him Duane. Want a daughter with a passionate commitment to reproductive rights and a fondness for hemp? Try Marissa.

At least, that's what a trio of graphs from Nametrix, a baby-naming app, might lead you to believe.

Nametrix examined what they call "the politics of names," graphing the likelihood that certain names are more likely to belong to future members of the American Civil Liberties Union — or the National Rifle Association. Specifically, Nametrix looked at political donations. The graph illustrates how left- or right-leaning certain names are. View the full graph here. (Nametrix also created two separate charts for male and female names, as well).

More red than blue means people with that name have a higher likelihood of donating to Republicans, while more blue than red means the opposite.

Not surprisingly, the more conservative names tend to be older — the kind that were popular decades ago — and, well, whiter. Meanwhile, names like Omar, Tyrone, Javier, Marcos and Manuel aren't even close to the graph's centerline. Such names skew heavily liberal since the Republican party has historically (and currently) had difficulties attracting minorities.

Nametrix's data for female names is less dramatically divided along racial lines, mostly because the majority of the female names had Democratic leanings, regardless of cultural origin. This shouldn't come as too much as a surprise — Republicans have never fared well with women.

Furthermore, Democratic female names tend to be ones that are more popular. Names like Ava, Mia and Abigail are "Democrat names" and were among the most popular female names last year. So it can be said Democrats follow trends while Republicans stick to tradition, at least as far as names go.

Don't commit these charts to memory, though — as proved earlier this year when Chelsea Clinton gave birth to her daughter, Charlotte, trying to predict the political significance of someone's name isn't an exact science.

As Gawker's Leah Finnegan wrote, "the creators of Nametrix ... have only served to enforce the wicked stereotype that Republicans are leather-skinned men named Biff and Democrats are teachers named Mia. But really: the most important thing is not to be a loser and name your baby politically."

Furthermore, America's racial makeup is changing rapidly. By 2043, white people will comprise fewer than 50% of the population. Interracial marriages are becoming increasingly common, meaning the face of the average American will look dramatically different by 2050.

The country is changing. This doesn't mean the country's names have to change with it — just that those names should represent emotional connections instead of ideological baggage.