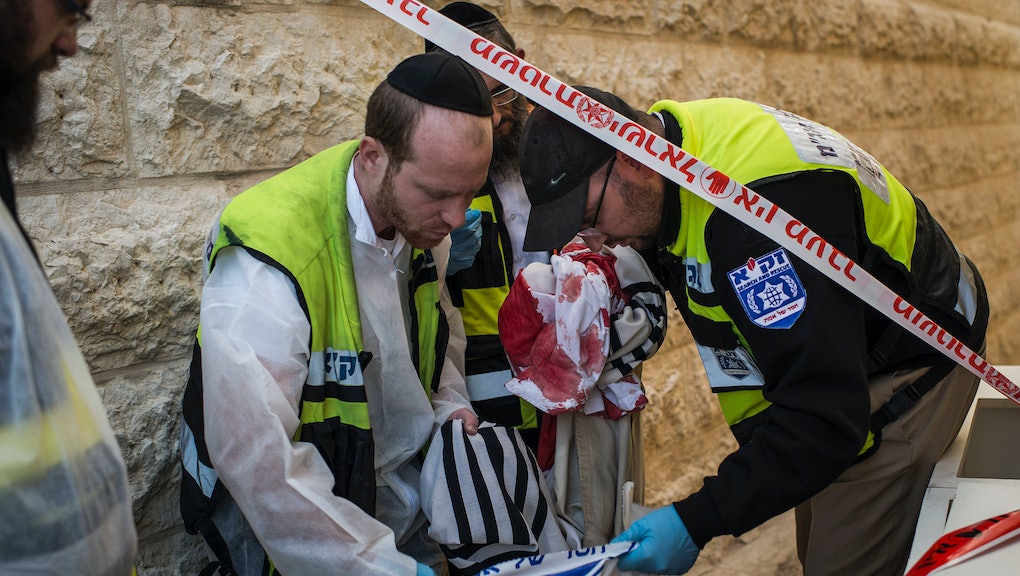 Two Palestinian men armed with a gun and meat cleavers stormed a synagogue in an ultra-Orthodox neighborhood of West Jerusalem early Tuesday, killing four men in the middle of morning prayers.

Following the attack, the assailants were killed in a gun battle with Israeli security forces that left one officer critically wounded, the Guardian reported. At least eight other worshippers were injured, many of them critically, inside the Kehilat Bnei Torah, a complex that houses prayer groups and a large community hall.

The four killed in the attack include three U.S. citizens and one British national.

Relatives identified the attackers as cousins Odai Abed Abu Jamal, 22, and Ghassan Muhammad Abu Jamal, 32. They were motivated by what they perceived as threats to the holy site that contains the Al-Aqsa mosque and the Dome of the Rock, relatives of the cousins said.

"They carried out this operation because of the fire in their hearts — they were under pressures, pressures, pressures and in one ripe moment, the explosion took place," a relative who gave his name as Abu Salah, holding photographs of the men, told the New York Times.

Background: The chaos on Tuesday morning was the deadliest attack on Israeli civilians in more than three years and the worst in Jerusalem since 2008.

The attack came amid tensions over a contested sacred site in the Old City. In recent months, clashes between Palestinian students and police have also rocked the main highway separating Israeli-controlled West Jerusalem from Palestinian East Jerusalem. The protests began in July after a Palestinian youth was killed in an alleged revenge attack by three Israelis, which occurred after three Israeli youths were killed by Hamas, the militant Palestinian faction.

The tensions reached a tipping point Oct. 30, when Israel blocked access to what it calls the Temple Mount and what Muslims call the Noble Sanctuary in the Old City, a move that a Palestinian representative denounced as a "declaration of war."

Soon after the most recent attack Tuesday morning, clashes broke out in East Jerusalem, where the assailants reportedly lived, and in the West Bank.

Netanyahu told reporters in Jerusalem he would "respond with a heavy hand to the brutal murder of Jews who came to pray and were eliminated by despicable murderers."

As this attack shows, the situation in Jerusalem is becoming increasingly volatile, with no clear solution in sight. For now, the still-unfolding chaos and grief in West Jerusalem serves as yet another message to political leaders: Reconciliation cannot wait.