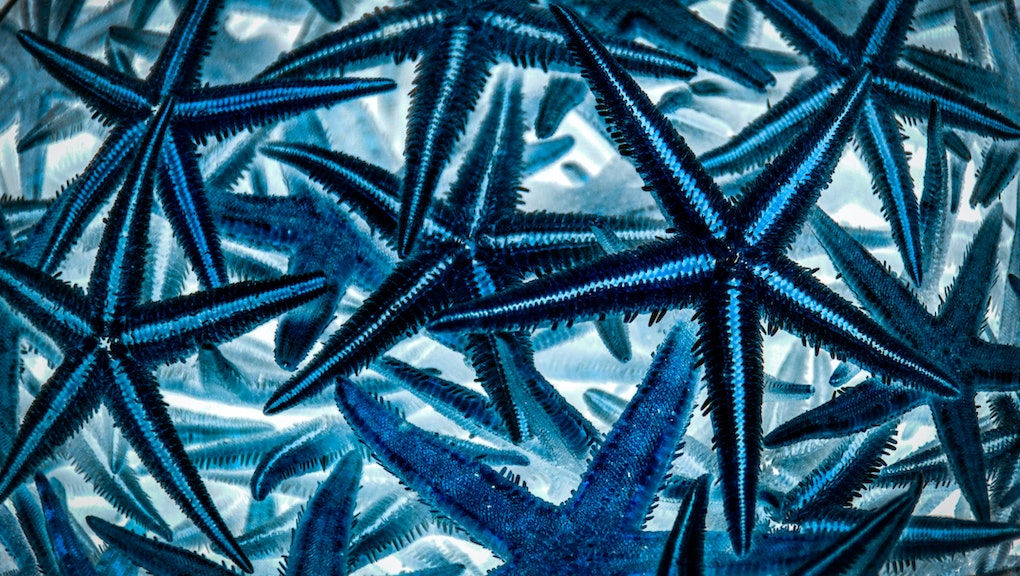 The world's starfish are melting.

The mass wipeout has been a mystery for researchers up until now. Though there have been some recent breakthroughs, most notably the linkage of warming waters to rising sea star body counts, Monday's findings represent a more concrete source for the devastation.

The destruction is not without consequences, particularly given its scale. "It has an extraordinarily significant effect on the biodiversity of the entire community," Carol Blanchette, a research biologist at University of California, Santa Barbara, told PBS.

To perform the study, researchers collected a group of wild and healthy sea stars that had no signs SSWD. They then injected half of the group with boiled version of SSWD; the other half were given an untreated version. Unsurprisingly, the non-boiled group contracted the virus. (Sorry, guys.)

The virus itself isn't new. As Jason Goldman at io9 points out, sea star wasting disease has been around for quite some time; outbreaks have been documented stretching all the way back to 1972. Monday's findings, however, seem to have finally pinpointed the pathogen at the heart of the disease.

It's a promising discovery, particularly given that this most recent outbreak is more widespread than past outbreaks.

What's the connection to climate change? Scientists aren't quite ready to establish a definitive connection to global warming, but previous research suggest that warmer waters may play a part in the spread of the disease.

It makes sense when you think about it — microorganisms often grow better in warmer climates. "A warmer world would be a sicker world," Drew Harvell, who was involved in the study, told PBS. "Under warming conditions, a lot of microorganisms do better. They grow faster. They replicate faster. Many of our hosts can actually be stressed by warm conditions. And so it kind of creates a perfect storm of sickness."

Though some scientists are skeptical that warming waters are a big factor — one told the Associated Press that outbreaks in Oregon happened in waters where temperatures have been colder than usual — they did add that other factors, such as increased ocean acidity levels associated with climate change, could play a part.

Regardless of the cause, the damage caused by SSWD is detrimental. "Losing a predator like that is bound to have some pretty serious ecological consequences, and we really don't know exactly how the system is going to look, but we're quite certain that it's going to have an impact," Blanchette said.