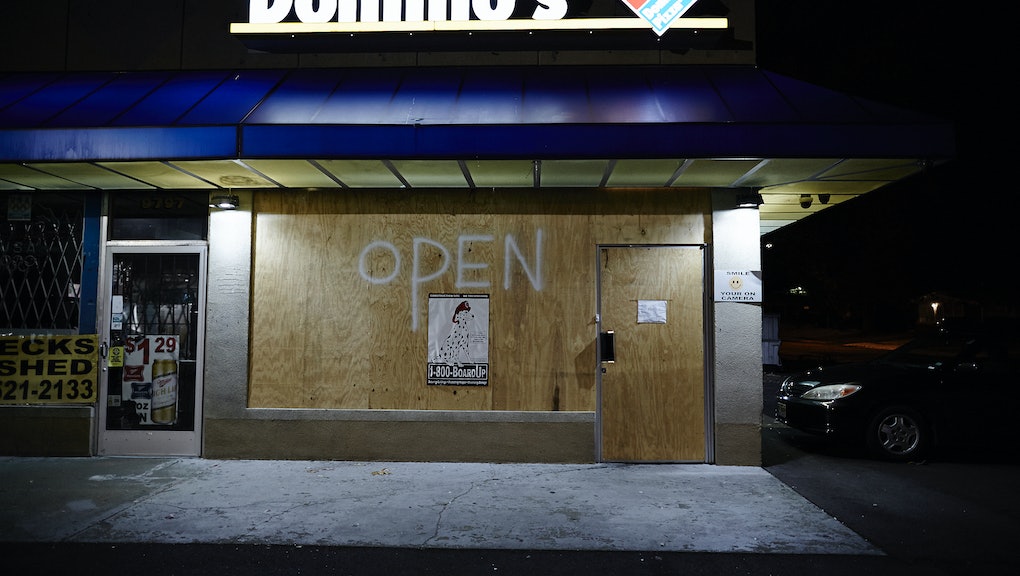 These Eerie Photos Show What Ferguson Looks Like Right Now

As of late Tuesday night, Ferguson, Missouri, is quietly waiting. The city looked nothing like the human rights flashpoint America saw in the media at summer's end.

Citizens are preparing for a Clayton-based grand jury to announce whether police Officer Darren Wilson will be indicted in the Aug. 9 killing of 18-year-old Michael Brown. But far from the scene of chaos the media often makes it out to be, the streets are dead quiet, and store owners are taking serious precautions in anticipation of civic unrest.

Up and down the thoroughfares of Florissant and West Florissant avenues, multiple storefronts are covered in plywood barricades to prevent people from breaking in. Many have the word "Open" spray-painted in clear view to indicate that business continues, despite their unwelcoming facades.

Over the summer, a minority of agitators vandalized and stole items from local commercial properties.

If the grand jury fails to indict Officer Wilson, a number of protests are planned throughout St. Louis and the surrounding suburbs. Missouri Gov. Jay Nixon's declaration that Ferguson is in a state of emergency — which has allowed him to activate the National Guard in the region — has incited some to prepare for the same escalation to violence the police prompted in August.

The grand jury announcement is expected sometime this week. Meanwhile, the city remains in an eerie calm before the potential storm.