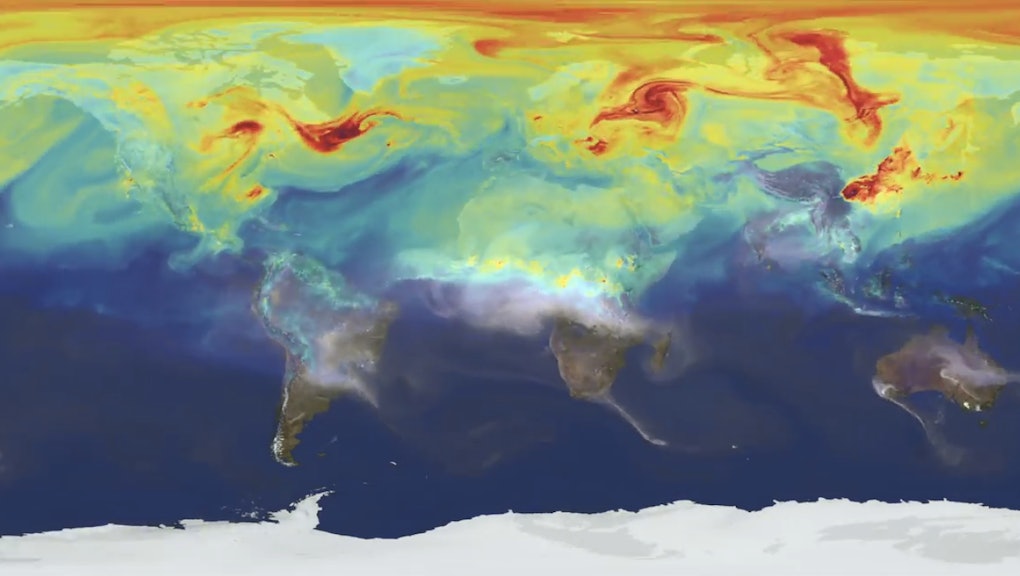 The news: There is more carbon dioxide floating around in Earth's atmosphere now than at any period in the history of human civilization — and it's not going away.

Here's what all that atmospheric carbon dioxide looks like swirling around the world over the course of a year, courtesy of this high-resolution model by NASA. And it's the most highly detailed visualization of how carbon dioxide actually moves throughout Earth's atmosphere on an annual basis ever completed.

The simulation was produced by a computer model called GEOS-5 running on NASA's Discover supercomputer and is accurate to a 4.3-mile-wide grid. Nearly 4 petabytes large, it took 75 days of dedicated processing power to complete.

What am I watching? The carbon cycle, or the process in which CO2 is absorbed and spat out by Earth's oceans, ecosystems and atmosphere over and over, year after year. NASA explains:

The visualization is a product of a simulation called a "Nature Run." The Nature Run ingests real data on atmospheric conditions and the emission of greenhouse gases and both natural and man-made particulates. The model is then left to run on its own and simulate the natural behavior of the Earth's atmosphere.

But NASA isn't simulating an entirely natural system. The video makes clear that rising levels of atmospheric CO2 are wafting directly from major emitters like the U.S., Europe and China. The gas then disperses across the planet as gigantic weather patterns carry it around the Northern Hemisphere. Some of the CO2 is removed by photosynthesis during spring and summer, but as NASA narrator and Goddard Space Flight Center scientist Bill Putman said, the planet experiences higher concentrations of greenhouse gases every single year. Earlier this year, CO2 concentration in the atmosphere reached the dangerous level of 400 ppm for the first time in recorded history — the highest it has been in 800,000 to 15 million years.

"It is urgent that we find a way to transition to non-carbon fuels as our source of primary energy. ... As long as human society continues to emit CO2 from burning fossil fuels, CO2 in the atmosphere and oceans will continue to increase," National Oceanic and Atmospheric Administration scientist Pieter Tans told Scientific American.

"While the presence of carbon dioxide has dramatic global consequences, it's fascinating to see how local emission sources and weather systems produce gradients of its concentration on a very regional scale," Putman said in a statement. "Simulations like this, combined with data from observations, will help improve our understanding of both human emissions of carbon dioxide and natural fluxes across the globe."

Why you should care: The scientific community almost universally supports the notion that human activity is behind global climate change, and the Intergovernmental Panel on Climate Change specifically targeted fossil fuels as the main culprit earlier this month. Visualizations like NASA's can help scientists understand more about the way Earth's atmosphere works but also call attention to the severe threat global warming poses to humanity and the global ecosystem.

"Continued emission of greenhouse gases will cause further warming and long-lasting changes in all components of the climate system, increasing the likelihood of severe, pervasive and irreversible impacts for people and ecosystems," the climate change panel warned.

"Limiting climate change would require substantial and sustained reductions in greenhouse gas emissions which, together with adaptation, can limit climate change risks."