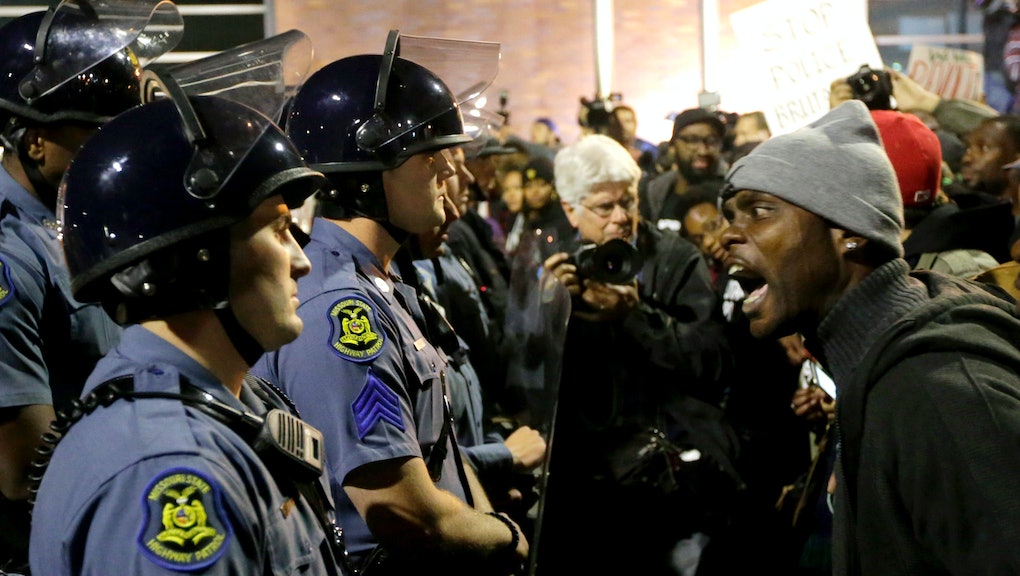 One Tweet Captures a Big Problem With Ferguson's State of Emergency

The August shooting of unarmed teenager Michael Brown launched months of protests in Ferguson, Missouri, with more likely ahead. Missouri Gov. Jay Nixon (D) declared a state of emergency Monday in advance of the protests that will likely erupt upon the grand jury's announcement, expected any day now, on whether to indict Ferguson police Officer Darren Wilson for the 18-year-old's death.

But the state of emergency belies a troubling logic in how law enforcement has approached the unrest in the small Missouri suburb, as St. Louis Alderman Antonio French tweeted Monday.

There's good reason for Missouri to prepare for the grand jury decision. The FBI has distributed warnings to state and local governments around the country about "extremist" protesters who may try to co-opt peaceful demonstrators in the wake of the announcement, and potential attacks on police officers.

But French's tweet makes a good point: Pitting one threat of violence against another will not diffuse tensions in a town racked by racial tensions. As evidenced by the aftermath of Brown's death, it will likely only raise tensions and further escalate protests.

After the shooting, militarized police forces were rolled out in response to relatively peaceful protests of waving posters and chanting slogans — and police fired tear gas canisters and rubber bullets and pointed assault rifles at protesters from atop their armored vehicles in response to a few Molotov cocktails and rocks from the crowd. Reporters were "manhandled and arrested" — two who were working at a local McDonald's were arrested for trespassing in the public restaurant.

As violence peaked, President Barack Obama said there was "no excuse" for the violence against police and protesters," and that "here in the United States of America, police should not be bullying or arresting journalists who are just trying to do their jobs."

The situation in Ferguson is a manifestation of the distrust between minorities and the police force. There has long been a history of the criminal justice system treating whites and minorities unequally, but Ferguson was the incident that brought this further to the public forefront. Between August 2013 and August 2014 — the month of the Ferguson incident — a Public Religion Research Institute survey found that the belief that minorities are unfairly targeted by law enforcement increased across all demographics in the U.S. population. Similarly, an Atlantic Media/Siemens State of the City poll, conducted before Brown's death, found that only 35% of urban minorities reported they had "a lot" of confidence in their local police forces.

The grand jury ruling could reopen these wounds. Nixon's 30-day order places the St. Louis County police in charge of law enforcement in Ferguson should any violence break out. He also called on the National Guard to assist, if need be.

The FBI bulletin gives police officers the right to be "armed with bladed weapons or firearms, equipped with tactical gear/gas masks, or bulletproof vests to mitigate law enforcement measures," ABC News reported. Although the bulletin solely targets those who exploit peaceful protests, not the lawful demonstrators simply expressing the views, peaceful protesters will inevitably be caught in the middle.

Police should be prepared to protect the public if there's violence, but they should remember that their job is to protect and serve, not intimidate and detain.

The response seems to be exactly what French says it is — "a government overreaction to black youth." In a situation of civic unrest and discontent with authority, forcing control through violence and further accentuating the hierarchy of power only exacerbates frustrations.

Ferguson protests aren't a force to be quelled with violence — they come from the voices of people begging to be heard.