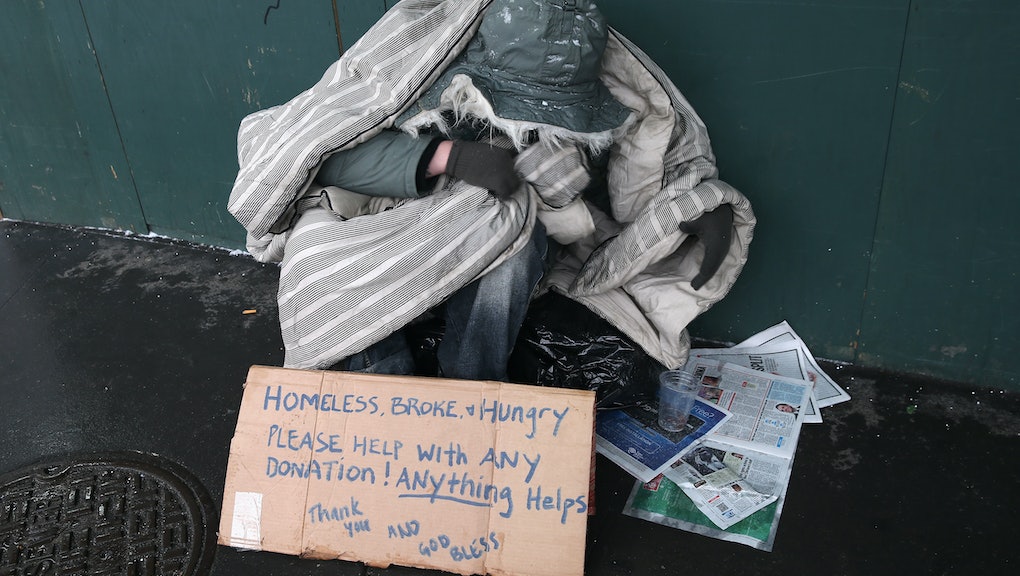 The City Union Mission in Kansas City, Missouri, provides emergency homeless shelters, long-term recovery programs and hot food for some of the estimated 2,434 homeless people in the city. But not if you're a same-sex couple.

On the heels of a series of court decisions that have left the state of marriage equality in Missouri and neighboring Kansas in limbo, the 90-year-old charity has made it clear that even if a same-sex couple is legally wed, they will not be allowed to stay together.

"We were founded as a Christian ministry with a belief that the Bible is an inspired writing from God and that obeying it was not optional for those associated with City Union Mission. We believe that homosexuality is not acceptable to God, so we take that position," City Union Mission's Director Dan Doty told Mic. "We love all people we serve, but don't endorse what we believe to be sinful or inappropriate choices. Therefore, we don't endorse any active lifestyle choice that the Bible says is wrong."

According to the charity's website, City Union Mission serves "single women, married couples, single parents and relatives caring for children younger than 18." Since same-sex marriage is currently legal in Jackson County, that would appear to extend to gay couples. However, since the charity doesn't receive government funding, it's not legally obligated to comply with anti-discrimination statutes (not that gays are legally protected from discrimination in either Missouri or Kansas).

City Union Mission offers half of the emergency shelter beds in downtown Kansas City and is the only shelter in the area with infirmary beds for the ill or injured. Although the charity states that no guests will be turned away from shelter unless they pose "a danger to other guests," gay couples who refuse to be separated will be "directed" to seek shelter at other area organizations like the Salvation Army. That Christian organization, too, has a troubling history with LGBT homeless people and employees.

In an email to Mic, Doty insisted that the shelter is willing to serve gays and lesbians — to a point. "We have always provided shelter for men or women who considered themselves gay. We do require birth gender men to dress gender appropriately and the same for birth gender women who consider themselves to be lesbian [sic]." According to Doty, the decision is "not a position that many outside of conservative evangelical Christianity are tolerant of."

The charity's decision to forsake the needs of gay couples and force trans people into clothing of the wrong gender is made all the more incomprehensible when looking at the particular problems of LGBT homelessness. According to the National Coalition for the Homeless, 40% of homeless youth identify as LGBT, and 30% of people currently living on America's streets identify as such. One in 5 transgender Americans experience homelessness at least once during their lives, according to the National Center for Transgender Equality, primarily because of family rejection and housing discrimination.

The social stigma of homosexuality extends to life on the streets, where homeless LGBT people are at higher risk for physical and sexual violence than their straight counterparts. Although Doty says that gay and lesbian homeless can still stay at the shelter, City Union Mission's "alternative" of splitting up families further isolates people who are already vulnerable.

According to the shelter's mission statement, City Union Mission's "core values" are Christ-centered and biblically based: "We are committed to using God's Word, the Bible, in all of our ministries and programs. We will submit to the Bible as our final authority."

That same mission statement also says that the charity's guiding principles include compassion, family, humility and love: All values that are in short supply in its decision to either force gay couples apart or send them back into the cold.