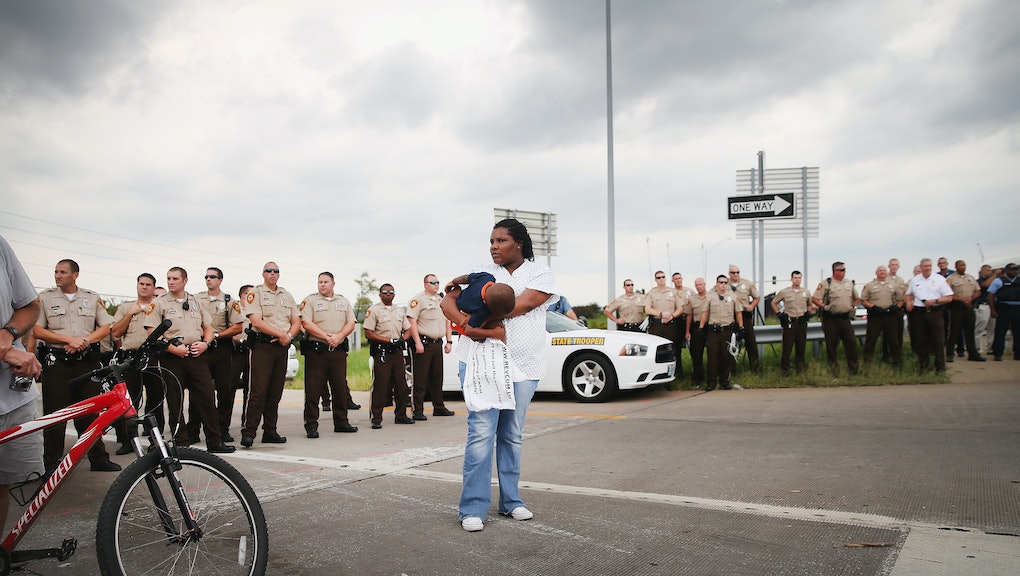 "My simple advice to all the young people — and those of us not so young — is to pace ourselves for the long haul. Be like a pilot light and not like a firecracker. A firecracker just pops off and it's gone. A pilot light will continue to burn."

That was Rep. John Lewis (D-Ga.) speaking Tuesday to the young men and women gathered in Ferguson, Missouri, waiting for a grand jury to decide if it will indict police officer Darren Wilson for the deadly Aug. 9 shooting of unarmed black teen Michael Brown.

The civil rights leader made the comments during a radio interview with Roland Martin, who asked Lewis if he saw any parallel between the protests in Ferguson and the 1965 marches across the Edmund Pettus Bridge in Selma, Alabama. Lewis, then president of the Student Nonviolent Coordinating Committee, was severely beaten by police during the first attempt.

He also warned that a violent police crackdown, as seen during the August protests, could set off not only new demonstrations, but wider debate about heavy-handed law enforcement tactics.

"There could be massive, nonviolent protests all over America," Lewis said. "When we were beaten on that bridge in Selma, people couldn't take it, when they saw it, when they heard about it, when they read about it. There was a sense of righteous indignation. If we see a miscarriage of justice in Ferguson, we're going to have the same reaction people had towards Selma."

But Lewis, who turned 25 just weeks before when he led the first of three marches out of Selma, saved his most poignant words for the young people who will be most squarely in harm's way if order breaks down.

With that, Lewis has delivered an important message for all of us, from the protesters to the people watching from afar, to keep in our hearts and minds as the grand jury decision nears and the possibility of a dangerous standoff between police and civilians becomes more real: stay calm, stay focused. Be strong.