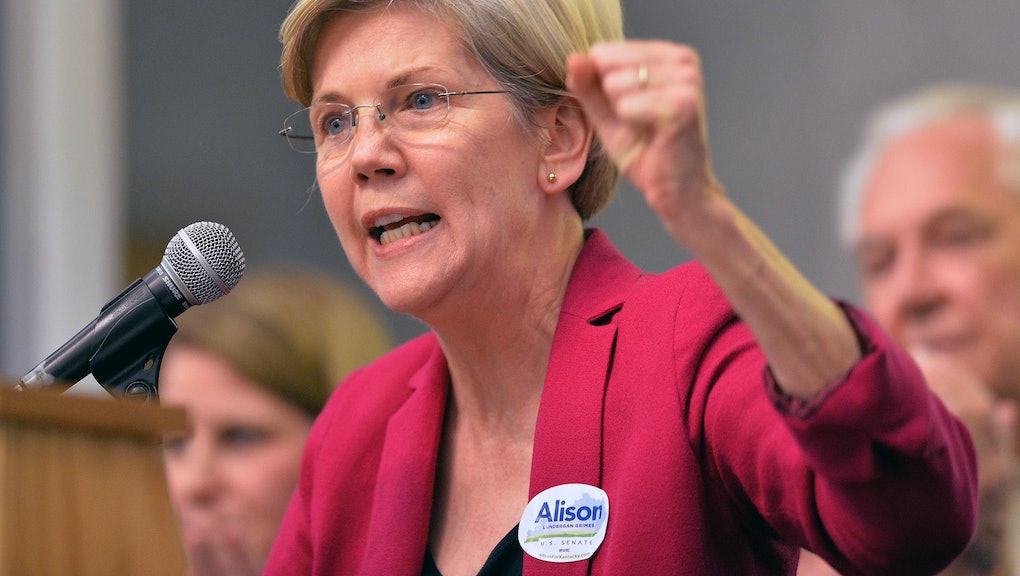 Elizabeth Warren Has Set Her Sights on a New Target

Elizabeth Warren, beloved warrior for the middle class and perpetual thorn in the side of Wall Street, has a new target: Walmart.

At a congressional briefing on Tuesday morning, Warren — along with Rep. George Miller (D-Calif.), labor advocates and members of OUR Walmart, a group that aims to expand the rights of Walmart workers — criticized the retail giant for how it treats its employees.

"It is good to hear workers' voices in the halls of Congress," Warren said, according to the Hill. "No one in this country should work full time and still live in poverty, and that's what raising the minimum wage is all about."

"This is about the simple dignity of the people that you've hired to work," Miller added. "We have to override what the policies are in a place like Walmart."

The briefing focused on ways to improve worker conditions and treatment. According to Miller, the responsibility lies in the hands of policymakers, because companies like Walmart weren't doing a good enough job themselves. In particular, Warren and her cohorts honed in on bills that are stuck in a congressional quagmire, including one which would raise the federal minimum wage to at least $10.10 an hour.

Warren acknowledged that passing legislation like this won't be simple, but stressed that she'll be bringing the fight. "We might not pass these three bills right away, but don't kid yourself about the importance of these bills and the assurance that we're eventually going to get them through," she said.

The company, for its part, says that it provides its workers with plenty of opportunities for advancement.

"It's interesting that this group is talking about the Walmart economy," Kory Lundberg, a spokesman for Walmart, told Mic in an email. "In reality, the Walmart economy is one where people have access to jobs with competitive pay and unparalleled opportunities for advancement and where people are recognized and rewarded for their hard work and accomplishments."

Nevertheless, Walmart has a history of controversy where workers' rights are concerned. It's been criticized in the past for its low wages and unfair labor practices. More than half of the company's hourly workers make less than $25,000 per year, Bloomberg Businessweek reported last year, and the retail monolith has faced accusations that it punishes workers who speak out against its labor practices.

Meanwhile, Black Friday protests, of which OUR Walmart expects there to be around 1,600 nationwide this year, are still planned for next week.