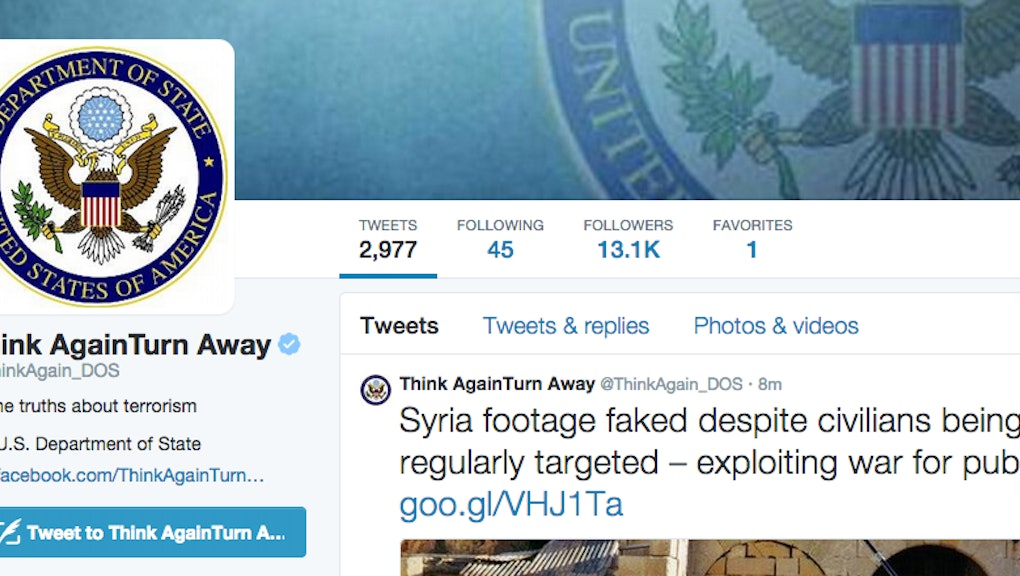 The background: The Twitter account "Think Again Turn Away" is about a year old and has been mostly used to reply to accounts linked to militant groups, though occasionally it shares U.S. military news and photos.

It's a product of the Center for Strategic Counterterrorism Communications, created in 2010 as a way to reach potential terrorists online on foreign language forums, expanding to English sites and on social media over the past year.

"Think Again Turn Away" isn't just on Twitter. There's a Facebook account with more than 8,500 likes and an ask.fm page where some poor Department of State staffer has to spin questions like "What is your favorite restaurant in the world?" into digs at terrorists.

Other programs: Social media isn't the only front where the U.S. has tried trolling hearts and minds. A YouTube video meant to parody al-Qaida — featuring leader Ayman al-Zawahiri dubbed with strange voiceover — was released last year to some mocking.

Meanwhile, the CIA has taken to scouring online games like World of Warcraft to recruit foreign engineers and scientists as potential spies. Everyone's online, as the thinking goes — even potential terrorists and spies — so why not turn some attention to the virtual world?