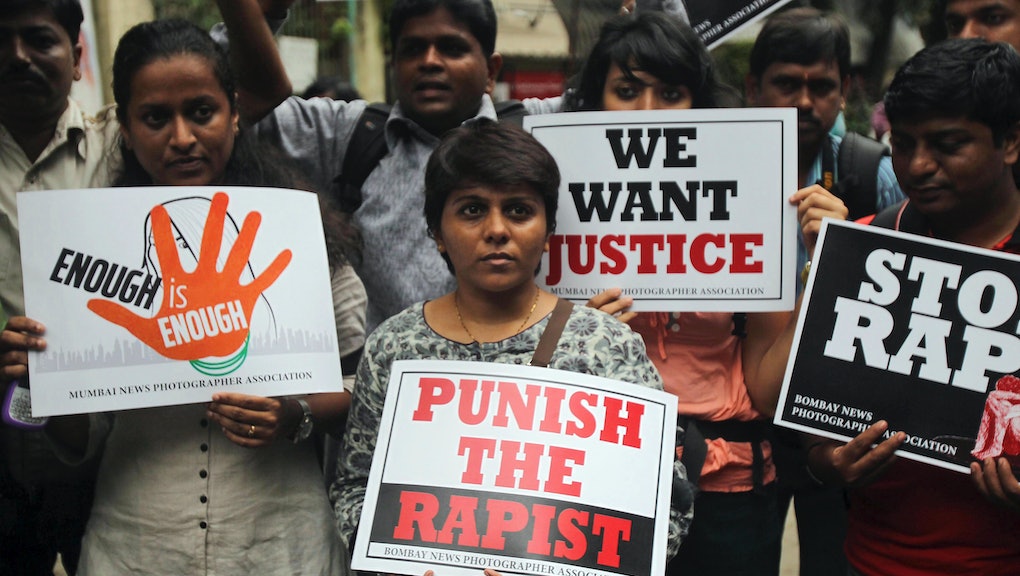 The news: If you contacted the police to report a crime, wouldn't you expect to be taken seriously? Or would you expect to be told that false reporting was a felony and that pursuing your case would suck up valuable resources? How about being told you're not acting like a victim?

A new study published this month in the Journal of Interpersonal Violence more or less confirms that some cops tasked with handling sexual assault victims are failing in these regards. That's a terrible problem, but the report suggests ways police departments can fix it.

The research: Calvin College's Rachel Venema interviewed 10 cops, of which seven were male and six were white, ranging from patrol officer to detective to sergeant in a mid-sized Midwestern city's police department. They all had direct involvement with criminal investigations. Even with this relatively limited sample, Venema drew a lot of insight into how and why some officers rationalize treating sexual assault different from other crimes.

From the start, some of the officers discussed rape reports as fundamentally unsolvable without copious supporting evidence, leading them to downplay the significance of the allegations. One officer told Venema that each sexual assault report forces police to "decide as a department how much resources we want to put into this," adding that "What's the chances of this one being true, you know?"

Without signs of physical violence such as ripped clothing, bite marks or scratches, officers said that the victim's credibility plummets. "You gotta think about the burden of proof we have which is beyond a reasonable doubt," one officer said. "It's not gonna be there."

Victim-blaming: Venema also found that in cases where the victim could have an ulterior motive, officers subject them to a "light interrogation," a practice one officer acknowledged was "very unique" to sex crimes. Police also said that those who didn't fit expectations of how a victim should act (such as seeming too "matter-of-fact") were viewed as suspicious.

Then there was this scenario described by an officer who "would explain to the victim that a false report is a felony, and that responding would expend a lot of resources" before asking them if they wanted the investigation to proceed:

So you talk about that, because if what she is telling me is true, we got to dedicate a lot of resources to it ... So, if we really got two guys raping people at random, that's a big deal for us, and we're going to investigate it hard, and we're going to have special patrols, and we're talking hundreds of hours, literally, on the police department. So, you sit down, and say "Listen. Here's what we got. We might spend hundreds of hours on it. Right now it's nothing. I'll let you, you know, tell me the truth or, if you don't, here's what we're going to do, here's what our investigation will be." You know? And sometimes they'll recant, and sometimes they won't.

The problem: In reality, sexual assault organizations like the National Sexual Violence Resource Center stress scholarly research indicates the false reporting rate is somewhere in the neighborhood of 2% to 8%. The Campus Advocacy Network also notes that the emotional impact of being sexually assaulted varies, meaning that survivors' energy can be "directed toward maintaining composure," sometimes producing "detached, logical" responses to questioning.

Suddenly, it looks like officers might be applying the wrong methods and thus failing to pursue real crimes.

The upshot is that one of the more experienced officers was aware that stereotyping of assault victims was counterproductive. But for the most part, as Slate's Amanda Hess notes, officers are likely to see both false reports and ones lacking enough evidence to secure a conviction as "a waste of time." Officers may also not realize their actions may be perceived as hostile. This might explain why women are often hesitant to go to the police in the first place, as Al-Jazeera's Claire Gordon reported in May:

According to a 2000 study by the Department of Justice, fewer than 5% of college women who suffered completed or attempted rapes reported it to law enforcement. Almost a quarter of rape victims who did not report said they were afraid of being treated with hostility. Twenty-seven percent said they thought the police wouldn't think it was serious enough.

These worries are, unfortunately, well-founded. Research by Wayne State University's Debra Patterson backs up prior studies indicating up to half of all rape victims are treated by the police in ways that cause secondary victimization. Even more extreme incidents still occur, like an inspector general's report that concluded five New Orleans detectives on the special victims unit improperly failed to pursue all but 14% of 1,290 sex crimes assigned to them.

What can be done about it: While Venema concedes that the sample is small, it nevertheless provides evidence that "police officer attitudes and attributions of blame mirror those of the general population. Internalized rape myth acceptance even influences victims and their reporting and treatment decisions." Officers' understanding of the issue reflects a general public that hasn't kept up with the legal reforms of the past few decades.

Nonetheless, there are many things that can be done to bring police up to speed. The report recommends departments balance "victim needs and police procedure" by providing additional sexual assault interview training for officers, which has led to many improvements. It also recommends that where resources are available, sexual assault response teams could be set up similarly to the crisis intervention teams that already exist to respond to suspects suffering from mental illness.

These steps need to be taken soon, because the current system of victim-blaming and rape culture in police forces, as revealed in this study, is not what law enforcement should look like.