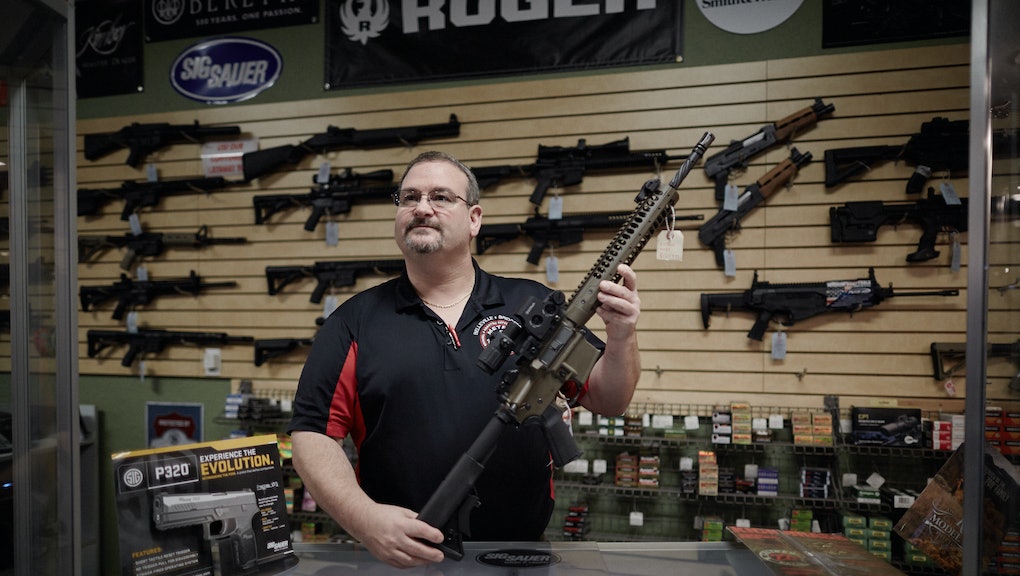 In the tense period before a grand jury decides whether to indict Officer Darren Wilson for killing Michael Brown, St. Louis-area shop owners are preparing to face violence. But one business isn't just weathering this tension, it's thriving in it. That business is firearms.

In a typical week, Metro Shooting Supplies in Bridgeton, Missouri sells 30 to 40 guns. That number has skyrocketed in November. According to owner Steven King, Metro sold a staggering 300 guns in the past seven days alone, many to first-time owners who also require lessons, safety training and basic handling instructions.

That's a sales increase of 750%, and King has no illusions as to why it's happening: "People are scared," he told Mic in an interview. "When that [Darren Wilson] verdict comes down, they want to be able to protect themselves."

King's referring to what happened in nearby Ferguson over the summer. When Officer Wilson shot and killed 18-year-old Brown on August 9, a small contingent of those who took to the streets in protest broke into local businesses, robbing, vandalizing and — in the case of the Quick Trip convenience store on West Florissant Avenue — burning shops to the ground.

Many residents expect a repeat of this unrest if the grand jury fails to indict. Missouri Gov. Jay Nixon has already declared a state of emergency in the area, which enables him to activate the National Guard if he thinks it's necessary.

But a heavy police presence gives little comfort to these new gun buyers. "There aren't enough police officers to look out for every person individually," King said. As a result, Glocks, Rugers, .38s and M&P9 Smith & Wesson handguns are flying off the shelves at Metro. Customers purchased 100 this weekend and 50 on Friday alone.

This is not an isolated trend. Tim Wheeler, co-owner of the Trail Creek Trade Co. in nearby St. Ann, told Mic he's also seen an uptick in sales, with an emphasis on what he calls "home-defense" firearms — pump action shotguns and the occasional handgun.

Trail Creek Trade specializes in hunting rifles and collector's pieces, so the rising tensions in Ferguson are raising significant concern as gun enthusiasts who'd normally be stocking up on rifles for deer hunting season are now joined by customers who are more concerned about home defense.

Yet Wheeler is emphatic that he doesn't endorse the shift: "We're not out here condoning fear," he said. "But at the same time, people want to be able to protect themselves."

Walt Reaster, an employee at the Gateway Gun Club and range in Bridgeton, also agrees that Ferguson is at the forefront of many people's minds when they stop by to practice shooting or take gun safety lessons.

Meanwhile, the racial breakdown of this new gun rush is hard to quantify (King insists that race is a generally overblown point of emphasis, while Wheeler declined to comment and Reaster said his customer base is mostly "regulars," i.e. the same people who've been coming to the range since long before August 9).

But those who had opinions had very strong opinions. "This is not about race," King told Mic. "All this race-baiting from pastors and the people telling folks to 'boycott white businesses' is just a way of dividing whites and blacks." He also says that 50% of Metro Shooting Supplies' new gun buyers are black, and every bit as concerned about their safety as his white customers.

Of course, they'd be remiss not to be: According to Mother Jones, data from the Centers for Disease Control suggests that black people were between two and eight times more likely to die at the hands of police than whites between 1968 and 2011. This is an especially salient fact in majority-black Ferguson, where 48 of the 53 police officers at the time of Mike Brown's shooting were white.

Overall, it remains unclear exactly who's "protecting" whom from what in this situation. But one thing is certain: On the possible eve of the grand jury's announcement, there'll be a whole lot of pump action shotguns and concealed carry handguns floating around St. Louis and its surrounding suburbs, waiting to be made useful.