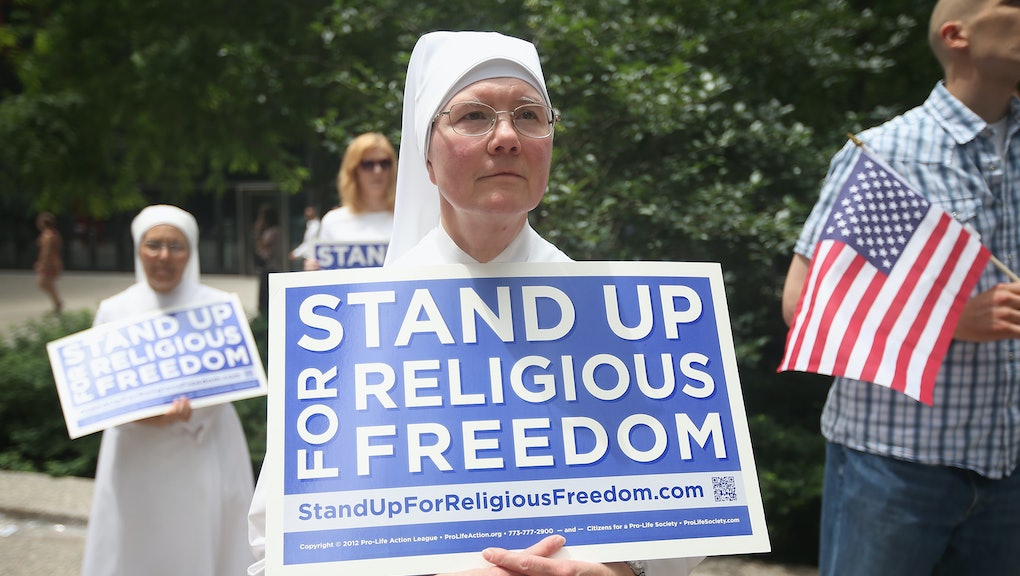 There's bold legal strategy, and then there's trying to argue that freedom of religion means you can't be sued.

An Indiana Catholic school and diocese are using religious freedom as a defense against discrimination charges by a female employee who says she was fired for undergoing in-vitro fertilization procedures.

In a federal appeal, lawyers for the school and diocese argued that allowing the case to go to trial would "irrevocably" infringe on their clients' religious liberties.

The background: Emily Herx, a teacher at St. Vincent de Paul School, part of the Fort Wayne-South Bend Diocese, filed a discrimination lawsuit against her employer in 2012, when she was fired after taking time off for in-vitro fertilization treatment. One monsignor called her "a grave, immoral sinner" for undergoing the procedure, the lawsuit alleges.

In September, a federal judge ruled the case qualified for a trial. The school and diocese appealed to a three-judge panel on the Seventh Circuit Court of Appeals, making the religious freedom argument.

As Mother Jones explains, the case comes down to religious freedom versus discrimination protection. The Civil Rights Act, which bans discrimination on the basis of race, color, religion, sex and national origin, has an exemption that allows a religious institution to favor members of its own religion. But Herx is arguing that a man would never be fired for infertility treatment, meaning this is a sex issue rather than a religious one.

A big step: The case is somewhat similar to the recent Hobby Lobby decision, in which the Christian-owned arts and crafts chain successfully argued that the government couldn't force it to cover birth control in its employee health insurance.

But this lawsuit would be more akin to Hobby Lobby firing an employee for using birth control. And to top it off, the school and diocese's argument isn't just that firing a woman for using a fertility treatment should be protected, it's that even sending the case to trial in the first place is a knock against the church's religious freedom.

"I've never seen this before," ACLU staff attorney Brian Hauss told Mother Jones. "What the diocese is saying is, 'We can fire anybody, and we have absolute immunity from even going to trial, as long as we think they're violating our religion' ... It's astonishing."