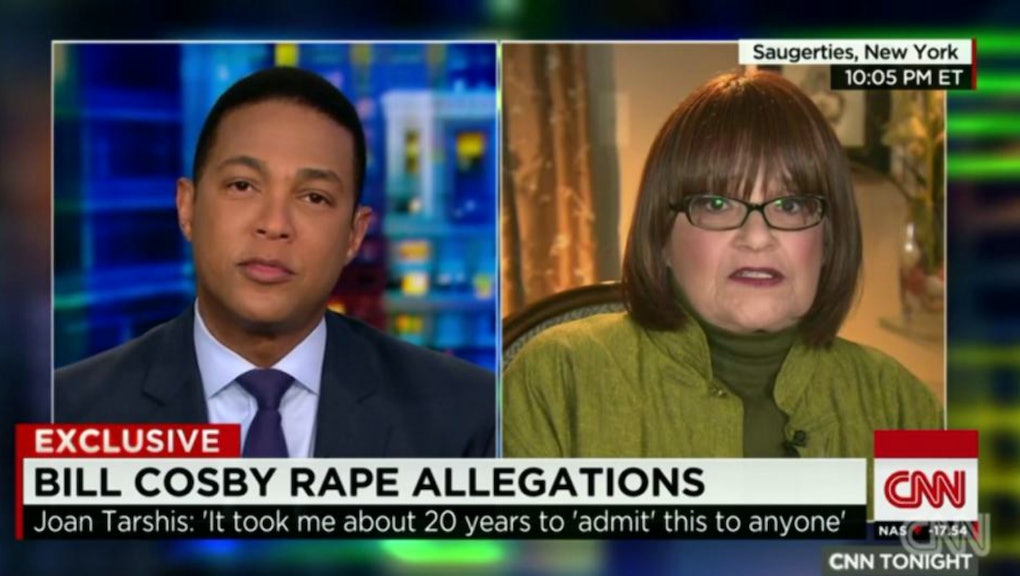 Music industry publicist and journalist Joan Tarshis came forward last week with allegations that she was drugged and sexually assaulted by comedian Bill Cosby after being invited to work on material with him in his bungalow in 1969. Her account includes specific details about the alleged assaults, including descriptions of Cosby's controlling, manipulative and deliberate behavior.

One of the now 15 women who have accused the Cosby Show star of assaulting them, Tarshis was interviewed Tuesday night by Don Lemon, who spent part of the CNN Tonight interview questioning if Tarshis had done enough to prevent her own rape.

"There are ways not to perform oral sex if you didn't want to have it," oral sex prevention expert Lemon told Tarshis, suggesting she should have bit off Cosby's penis.

It was, in other words, a master class in how not to talk to a victim of sexual assault.

Here's a transcript of the exchange:

Lemon: And you said he made you perform oral sex.

But he really didn't — because lecturing a rape victim on how they could have avoided their own rape is outrageously unacceptable in any context, let alone an interview watched by millions. Rape is sex the victim didn't want to have. That's part and parcel to what constitutes a rape. Lemon's logic wouldn't make sense while reporting on any other crime, and it's particularly appalling when it's directed toward the alleged victim of a particularly serious one.

The implication of the "using of the teeth" remark was pretty clear: If this was actually a rape, why didn't you fight back? Tarshis was a drugged, confused and scared 19-year-old being overpowered by a much larger man in his 30s. Here's how she described it to Philadelphia Magazine:

Yes. He was holding me down. He's much bigger than I am. He's very big. I couldn't resist. He was forceful. He definitely used force. There was nothing I could do except wait for it to be over. I was in shock.

"He's too powerful," Tarshis told Inside Edition. "How can you stop him? I'm just a little person. What am I going to say? 'He raped me?' Who is going to believe that?"

Twitter is already busy mocking Lemon with the hashtag #DonLemonReporting:

Lemon should know better. Lemon bravely admitted several years ago to being the victim of a pedophile in his youth, adding that, "Why, when they come forward, is it so often [victims'] behavior that comes under scrutiny and doubt?"

Good question — maybe Lemon should listen to his own advice.