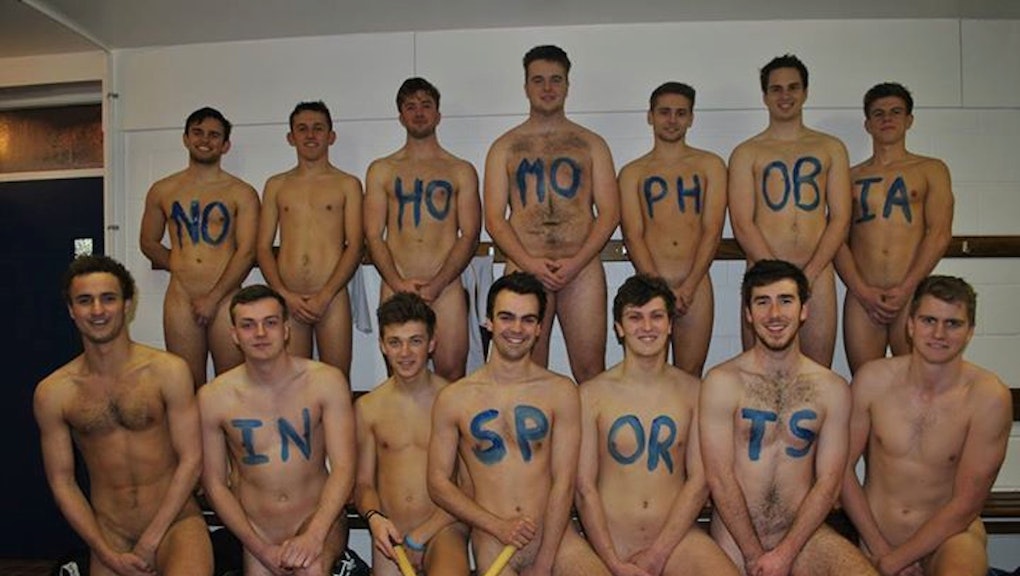 Homophobia is horrible, no buts about it. But there are butts — quite a lot, actually — in the latest example of sports teams standing up against hate by stripping down.

Voice Your Rights Project, the group behind the video, is a student-led organization affiliated with the university. Its mission is to help all people be respected and treated equally in society. The video was its first campaign devised to raise awareness on a number of issues relating to human rights. Voice Your Rights' campaign was initially set to print a calendar as well, but faced financial constraints. Although the group isn't able to raise money, it's bringing eyes to the cause.

Dmitri Vichas, the project leader of Voice Your Rights, wrote to Mic about the inspiration behind the video:

"We constantly see in the media and press athletes from all sort of sports coming out. Most of those stories share the same lines: 'We were scared to come out' 'we fear the reactions of our team members, the fans, the press, the sponsors' etc. Well I thought that this needs to change."

Honestly, we're not sure what to think about the latest trend of sports teams stripping down to fight homophobia. On the one hand, a bunch of (mostly) straight athletes taking their clothes off seems like a somewhat tangential way to protest LGBT discrimination. On the other, it's nice to see young people, men especially, taking a strong stance against attitudes that are often based in masculinity standards.

Case in point: Earlier this year, the Warwick rowing team returned with its annual steamy calendar, the proceeds of which go to an organization that uses education to fight homophobia.

Meanwhile, professional sports leagues lag behind collegiate sports. Jason Collins is the only out male athlete in America's four big professional leagues (it's worth noting female athletes have been out for years). In contrast, sports at the college level are putting more effort in creating welcoming environments for their LGBT athletes. Big names like Penn State and the University of Notre Dame have joined the "You Can Play" campaign to foster diversity in their athletics programs. These and similar efforts are paying off across U.S. college campuses, which boast increasing numbers of openly LGBT athletes.

According to Vichas, the team didn't need any convincing to get undressed. "The president of the club Scott Collier agreed straight away and he and his team support the campaign 100%," he wrote. "On the day of the shooting the hockey lads came on set and the first thing they said was: 'When are we taking our clothes off?' Everyone was so enthusiastic and excited about the shooting."

And most others are just as excited about the video as well, for stimulating reasons. You know: The end of homophobia in sports.