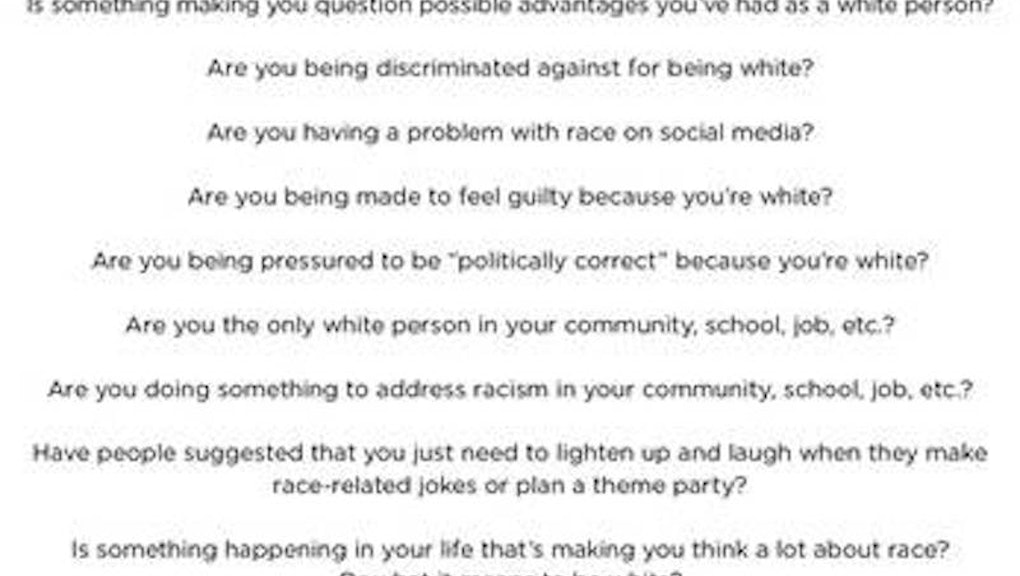 Punched in the Head Productions via Craigslist

Do we really need a documentary about what it's like to be a white person in America?

That's the reaction most people had in October, when PBS and filmmaker Whitney Dow released his controversial The Whiteness Project. The interactive online series features white people speaking candidly about their experiences with racial identity. Reactions were mixed, to say the least. But MTV is taking a slightly different twist in an upcoming, untitled TV special which aims to place the focus squarely on young white people.

Not surprisingly, news of the documentary has not been received well. But whether we like it or not, ignoring the strongly held beliefs of young white people may not be the right move. If we're truly interested in moving racial justice issues forward, an honest and nuanced conversation about white identity is both important and necessary.

The project is very much in the early stages, so early that the first casting call only appeared last week via Craigslist posts. Much of the initial outrage has centered around these initial questions, which include:

"Are you being discriminated against for being white?"

"Are you being made to feel guilty because you're white?"

"Are you being pressured to be 'politically correct' because you're white?"

While initially incendiary, there's a method behind MTV's madness. The project is being spearheaded by Pulitzer Prize-winning journalist and filmmaker Jose Antonio Vargas, who will direct the upcoming documentary. Vargas told Mic that this isn't the only casting call being made, and that more are on the horizon to ensure there's a diversity of voices in the conversation.

"We want to hear from as many people as possible and not put words in their mouths," he said, noting that different questions will resonate differently depending on the person and the context. "We're not interested in a 'gotcha' tone... I'm interested in connection and dialogue. I think we over-communicate about race without doing that."

The questions in the ad, and the project itself, are largely informed by the results of surveys commissioned by MTV's Look Different campaign, which revealed that millennials actually have mixed feelings about race and racism in America. In fact, the findings showed that nearly half of young white people believe that discrimination against whites is as big a problem as discrimination against people of color. Alarmingly, only 20% of young people feel comfortable talking about bias.

That's a lot of voices who feel like they aren't being heard.

But Vargas, whose recently released film Documented is already generating Oscar buzz, is no stranger to uncomfortable yet necessary dialogue. Since making his immigration status public in a story for the New York Times Magazine, Vargas has spoken at more than 150 colleges and events across the country. And more often than not, he said, the conversation ends up being about race and what it means to be white in America.

"Around colleges, people hear the term 'white privilege' a lot, but I don't think people know what that means," Vargas said, adding that whiteness means different things to people depending on their geography and social context. "When you talk to young white Americans, in places that aren't very diverse or that are diverse, people say they feel victimized for being white, so I want to know what they mean by that."

Overall, he said, the goal of the new project is to push the dialogue more towards a place of understanding for everyone involved, and to question how we've come to construct racial identity.

"The way we talk about race, for the most part, is incredibly superficial and there's no knowledge of history," Vargas said. "I'm a firm believer in empathy, which is missing in a lot of the content out there, be it print or film."

At this point, it's impossible to speculate about what exactly will happen when MTV airs the documentary in 2015. In the meantime, it may be worth taking a step back and thinking critically about Vargas' intent. While it's easy to scoff at the idea of exploring what it means to experience life as a white person in America, in the long run, writing off these opinions instead of listening to them may actually be more problematic.