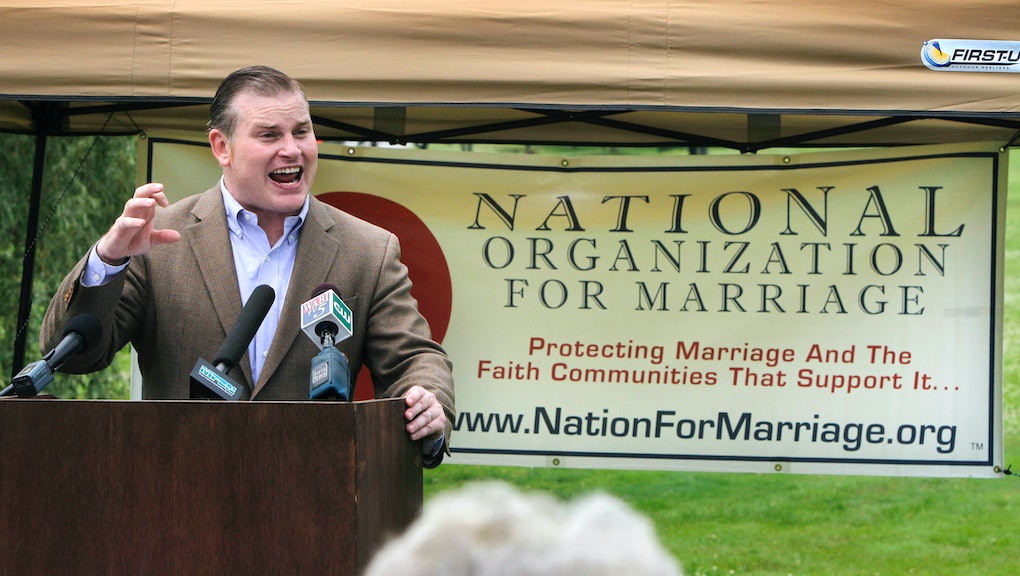 The news: The National Organization for Marriage, one of America's most vicious anti-gay lobbying groups, has apparently kicked and screamed itself right into an early financial grave.

After refusing to release its 2013 financial data to the Human Rights Campaign until the latter filed a complaint with the IRS, the world now knows what NOM was hiding: They're practically bankrupt.

Why: Slate's Mark Joseph Stern has a few theories: Either donors are wary of being unmasked as contributing to NOM's increasingly hateful campaigns against equal rights, or they've simply realized that the fight is increasingly pointless. More than 30 states now allow gay marriage, while well over half of Americans support same-sex marriage rights.

NOM's response to changing times has been a total embarrassment. In June, NOM held a march on the U.S. Supreme Court that included speakers who enthusiastically compare homosexuality to bestiality and Nazism. It continues to insist the courts will eventually back their stance, despite all evidence to the contrary. It even bragged about spending its money opposing gay Republican candidates.

Last week, it responded to federal court decisions by urging Kansas Gov. Sam Brownback to "reject the idea that Kansas must abandon marriage because out-of-control federal judges say so" and keep refusing to issue same-sex marriage licenses, in violation of the law. Finally, in one of the most appalling acts in the organization's history, NOM co-founder Brian Brown traveled to Russia in 2013 to praise and encourage the nation's vicious new anti-gay laws. The HRC even suggests that NOM's loans from its own Education Fund may have violated the latter's tax-exempt status.

Why you should care: NOM is one of America's most pointless and hateful groups, so its impending demise is cause for joy. In fact, the organization is apparently now so unpopular that without two anonymous mega-donors, it wouldn't have even managed to hobble its way through the past year.

"If I were Brian Brown, I'd be worried that my two or three mega-donors are soon going to come to terms with the fact that they'd largely be better off flushing money down the toilet," HRC vice president of communications Fred Sainz said in a statement. "Americans certainly aren't buying what NOM is selling, and it's only a matter of time before the trickle of money keeping the lights on at NOM HQ dries up."

Jezebel's Anna Merlan was blunter, saying, "There's also the fact that anti-gay bigots are old and dying. Not fast enough, but at least NOM is starting to feel the pinch."

Ouch. In the meantime, NOM will probably manage to shuffle along for a while yet, but it looks like its time on the national stage is pretty much over. Good riddance.