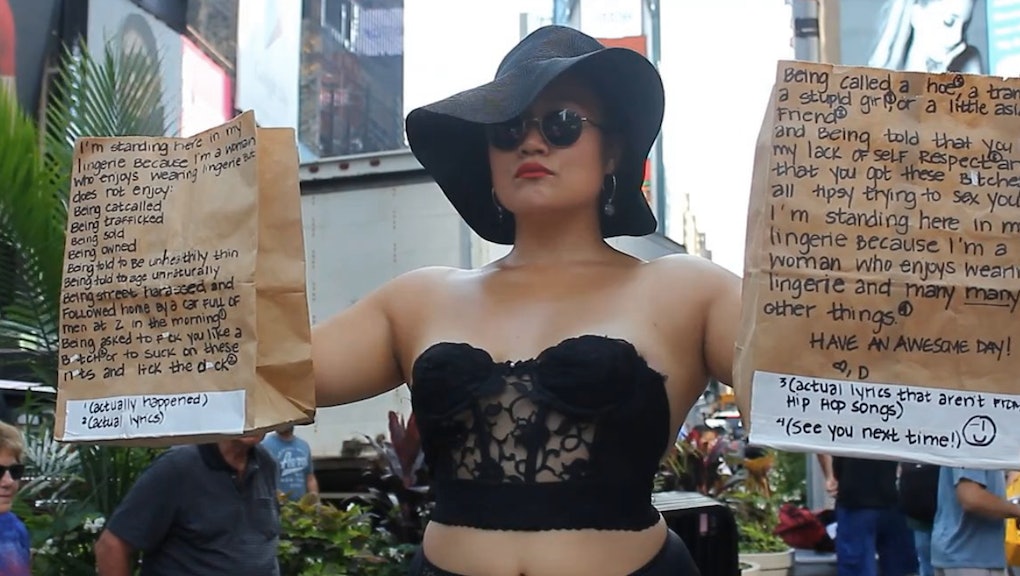 Lingerie and feminism don't always go hand in hand. But thanks to performance artist Diana Oh, that may soon be changing.

Armed with lingerie, a hat, sunglasses and -- literally -- a series of soap boxes, Oh is on a mission to expose our culture's problematic view of female sexuality. Standing in swarming areas of New York City with two other women similarly stripped down to nothing but their underwear, Oh's project, a series of 10 different taped performances dubbed My Lingerie Play, is designed to send a strong message to those who wish to control women's bodies.

In the video, Oh describes her commitment to ending "slut shaming," noting how it "feeds into unacceptable violence against women all over the world." As onlookers linger, stare, snap photos and laugh at the women, the performers stay silent. As is clear in the tape, these crowds' reactions effectively make Oh's point for her.

"Women's bodies are under attack, and I want that to stop. That is the ultimate goal," she told Mic. "I want women to be allowed to be sexual beings without it coming at the expense of our humanity and safety."

And it's a very timely point indeed. We are currently still embroiled in a very public debate over whether women who are sexually harassed deserve it. Still too many (including some of our friends at Fox News) believe that it's a man's right to yell masturbatory thoughts to complete strangers on the street. Oh disagrees. She views this kind of abuse as just one more way women are systemically dehumanized. "We are not asking to be harassed, abused, talked down to or violated, no matter what we're wearing," she says in the video. "The problem is not sexualization, it's the degradation that comes with women expressing it."

This is an important distinction. Oh has no problem with women being sexual. What she does have an issue with is how we treat these women when they express their sexuality. "The solution is not to tell women to stop being sexual beings," she says. "The solution is to change the way we are talked about, for being a sexual woman does not strip us of a humanity."

Although the last installation of her project occurred over the weekend at New York's Paradise Factory, Oh encourages women and men who feel passionate about body-shaming and the wider implications it has for women's safety and well-being to organize their own protests.

So far, the reaction to her project been mixed. Although Oh has received praise from many, she's also been the focus of the backlash familiar to feminists. "I have also received very scary threats and harsh bullying, statements that would make anyone fear for their safety," she told Mic. The work of [My Lingerie Play] has been polarizing. Either people say, 'Thank God you're saying something' or they say, 'Shut the hell up, you're an idiot.' I ignore the latter. There's nothing you can say that is going to stop me from doing this work. I know the world needs it. I know the world needs it now. I need it. For myself."