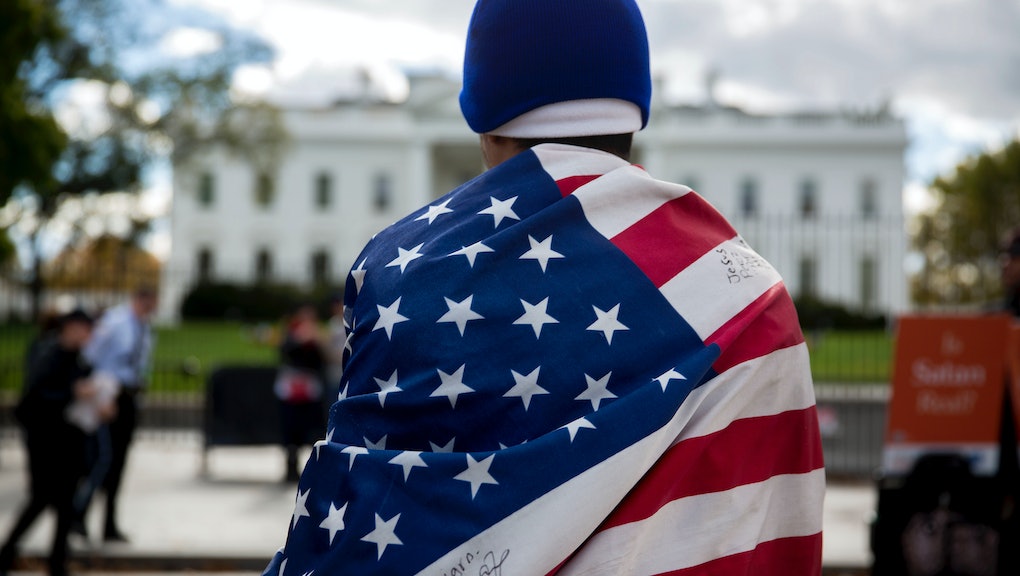 5 Myths About Immigrants That Everyone Needs to Stop Telling Immediately

President Obama will announce a series of executive actions Thursday night that will shield millions of immigrants who are in the U.S. without permission from deportation in the coming months. The president's gesture is important both substantively and strategically, as Republicans continue to grapple with their stance on immigration reform. Due to reform's importance to the growing Hispanic voting bloc, the GOP's response will impact the party over future election cycles.

The debate about immigration will rage in the media. Ugly, racialized claims will rear their head, and mythic notions about immigrants' effects on society will spring up everywhere. Here are some important myths to keep in mind about a community that is inextricable from the fabric of American life, and for whom the prospect of a life out of the shadows means even better things for this country.

Credible studies estimate that households headed by immigrants who are in the U.S. without authorization paid over $11 billion in state and local taxes in 2010. These workers pay sales taxes and property taxes (even if they rent), and more than half are working on the books and pay income taxes. The Institute for Tax and Economic Policy found that the percent of income that unauthorized workers pay in state and local taxes is not only comparable to that of people in the same income bracket, but in fact effectively more than people with higher incomes in some scenarios.

A report from the Congressional Budget Office estimates that immigration reform could provide more than $450 billion in additional federal revenue over the next decade.

Immigrants without legal documentation pay taxes for social services that they generally don't receive. They are ineligible for almost all federal public assistance programs and most major joint federal-state programs, such as Social Security, welfare or food stamps. It's worth noting that unauthorized immigrants without insurance can seek out emergency medical care (for which they are financially responsible, but given an inability to handle exorbitant bills, the cost is often in effect subsidized by a combination of the state and the health care system -- another reason health care should be offered to anyone who resides in the country).

In sum, immigration reform would make it so that an entire segment of society is eligible for benefits that many of them pay for.

Many immigration opponents view the job market as a zero-sum game, counting every job taken by an unauthorized worker as a loss for a native-born one. These workers do of course add to the labor supply, but if their role in the economy is contextualized, it's easier to see why immigrant flow doesn't correspond with lower employment rates for native workers or put downward pressure on their wages (with the exception of a fairly small impact on low-skill high school dropouts).

Immigrants in general don't vie for the same jobs as native workers, and they generally operate in the lowest end of the labor market. They simply aren't traditional competitors in the mainstream economy. In fact, studies show that employers create demand for low-skilled laborers in areas that attract them. These immigrants contribute to demand for goods and services they consume, which then increases demand for labor. Ultimately, they expand the size of the economy, and their consumption contributes to long-term growth.

If they are able to stay in the United States legally, many low-skilled immigrant laborers could incorporate themselves into society and contribute to the country's rich history of immigrant entrepreneurialism, which has been central to America's unrivaled status as an innovator. Some economists have estimated that for each job an immigrant fills, an additional job is created.

Myth: Illegal immigration leads to an increase in crime.

Crime rates in the United States have fallen as the population of unauthorized immigrants has increased for the past quarter-century:

In American history, immigrant enclaves have always taken a generation or two to assimilate linguistically and culturally into American society. In the 20th century, the United States was brimming with hundreds of foreign-language newspapers and pieces of literature, circulated for and by European immigrants. Over time, they, their children and their children's children maintained some sense of a specific ethnic identity but fully embraced popular culture and English. It's difficult to conceive of why any immigrant community would find any benefit in refusing to learn English.

Of course, the U.S. is also culturally enriched by the influx of Spanish speakers: The country's monolingualism is extremely unusual in scheme of the global community.

These are but a few of the many misperceptions people have of the immigrants that live and work in communities across the country. Hopefully immigration reform will help bring the truth to light.