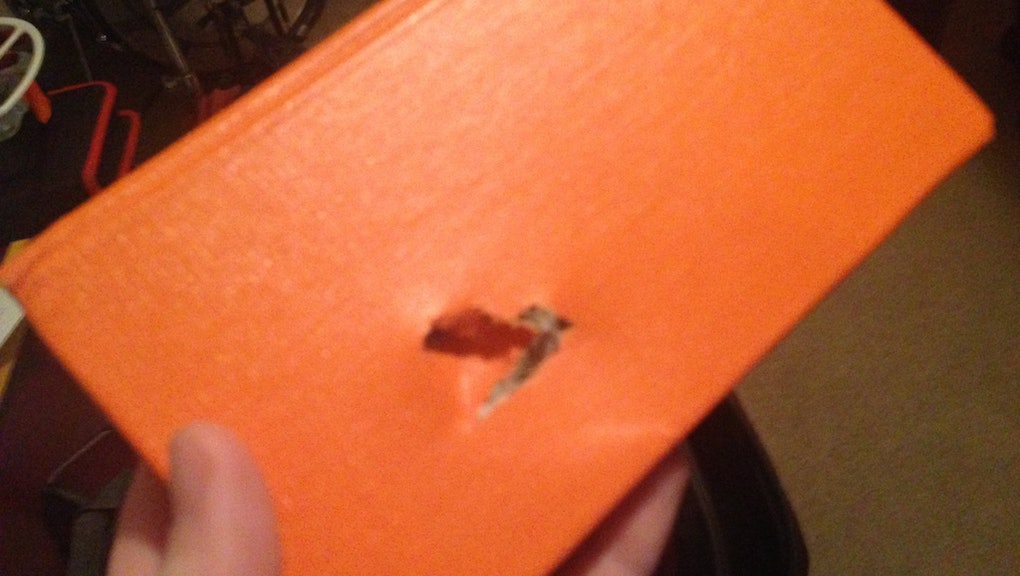 Three people were injured early Thursday at Florida State University's Strozier Library after a former student opened fire inside while between 300 and 400 students were studying for finals. The gunman, identified by the Associated Press as lawyer Myron May, was subsequently killed by police after engaging them in a shootout.

One very lucky student, Jason Derfuss, escaped almost certain injury and possible death as a bullet was stopped by a stack of books in his backpack. Derfuss posted photographic evidence of his brush with death to Facebook soon after:

Derfuss posted an account of his harrowing brush with death along with the photos:

Earlier tonight there was a shooting at FSU, right as I was leaving Strozier. I didn't know this at the time, but the Shooter targeted me first. The shot I heard behind me I did not feel, nor did it hit me at all. He was about 5 feet from me, but he hit my books. Books one minute earlier I had checked out of the library, books that should not have stopped the bullet. But they did. I learned this about 3 hours after it happened, I never thought to check my bag. I assumed I wasn't a target, I assumed I was fine. The truth is I was almost killed tonight and God intervened. I know conceptually He can do all things, but to physically witness the impossible and to be surrounded by such grace is indescribable. To God be the glory, forever and ever, Amen.

According to WCTV, one of the victims was released, another is in stable condition and another remains critically injured.

The Associated Press reported that students heard about half a dozen gunshots during the incident, at least one of which failed to find its target thanks to a few inches of historical literature. Police say there is no further threat to student safety, and the university believes May's rampage was an isolated incident.