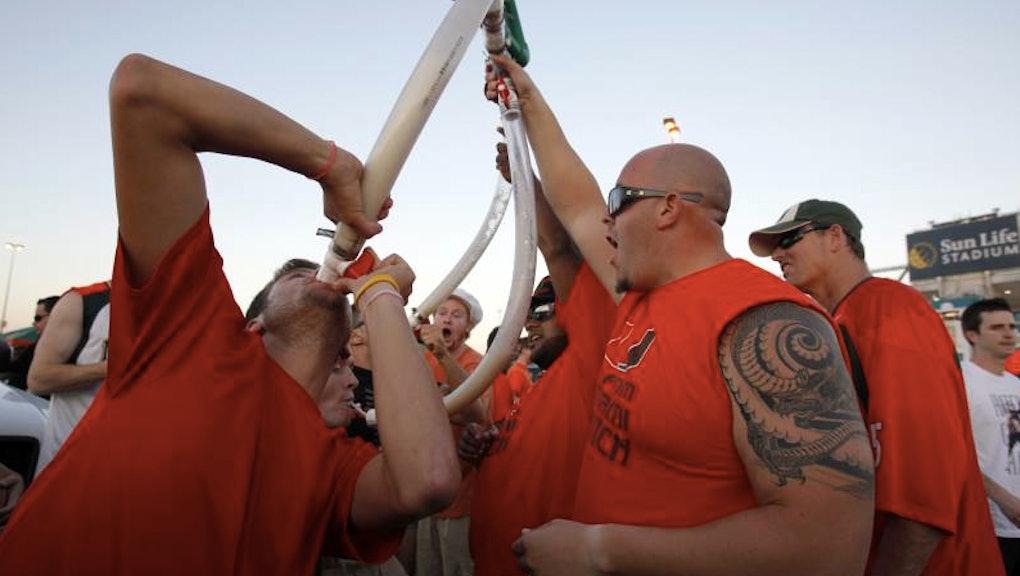 When University of Edinburgh's newly minted Delta Kappa Epsilon's Alpha Sigma chapter put "feminists" as an agenda item, it shouldn't surprise anyone that the discussion wasn't exactly centering on female empowerment. After all, this fraternity is known in America for its past disregard for their female counterpart. But this particular chapter appears to have potentially outdone their U.S. peers in a meeting punctuated by shockingly brazen misogyny, transphobia and rape jokes.

The Student, Edinburgh's school newspaper, reported the chapter's comments after getting a hold of the group's minutes. If ever there was a sign of rape culture's institutionalization, it's that these young men felt invincible enough to enter one brother's joke about taking members of the campus feminists on a "rape trip" into official record.

The Edinburgh University Feminist Society, the target of these comments, issued a statement condemning the fraternity and their well-documented subjugation of women.

"The fact that this type of behavior is acceptable to a group of students, and that it was even recorded in official minutes, is a clear example of how rampant sexism and misogyny exists in our everyday surroundings, and we must fight it," the organization wrote on Facebook.

"The revelations in this article also confirm our long-standing view that the establishment of a frat chapter, or any all-male society in Edinburgh would be representative of misogyny and result in situations making people, particularly women, feel unsafe."

This is not an issue of harmless, youthful hijinks and juvenile humor. As Jessica Valenti wrote earlier this year in the Guardian: "These are not anomalies or bad apples: Numerous studies have found that men who join fraternities are three times more likely to rape."

Not all men who join fraternities go on to rape, but #YesAllWomen who attend colleges where those fraternities are located are exposed to the dangerous climate they deliberately create. So how much more evidence do we need before we actually do something about it? Case in point, earlier this year, text messages and emails like the one below from the Epsilon Iota secret fraternity at American University led to very little action from the administration.

The fact that Delta Kappa Epsilon directed their rape threats toward the very group seeking to challenge their privilege is telling in itself. Women who vocally challenge the status quo are often threatened with sexual assault, and rape becomes another weapon in the abuser's arsenal. That's the thing with misogyny: The more you stand to lose from its dismantlement, the harder you'll fight for its continued existence.

Feminists can demand that these groups be banned but until school administrators back them up, it's unsafe for them to do so.

According to the Huffington Post, a University of Edinburgh spokesperson said "We are treating this matter extremely seriously." Let's hope this means actions, not just words, because Delta Kappa Epsilon may not have acted on their threats yet, but nothing guarantees they won't.