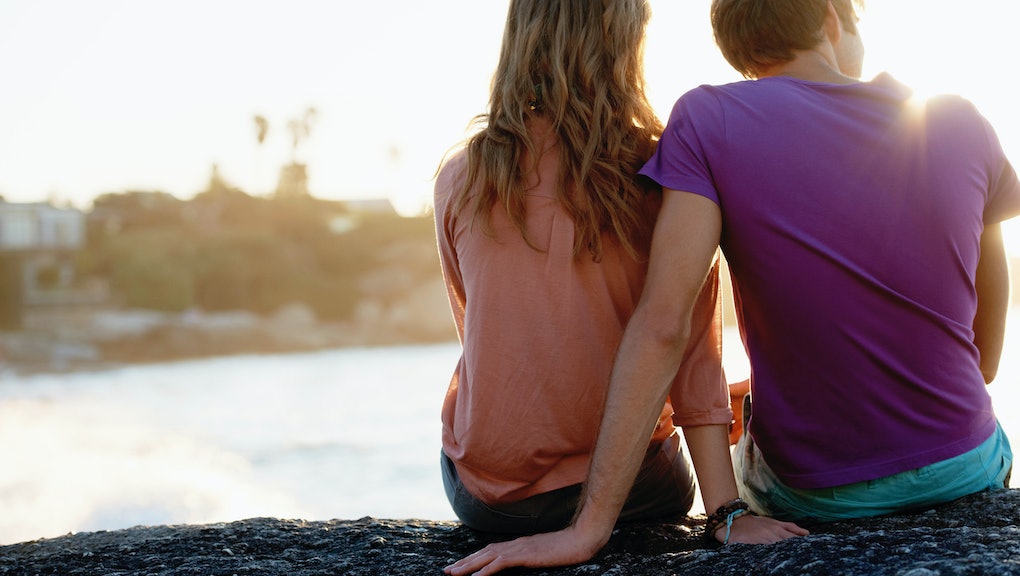 "Millennials Say No to Marriage."

"Why Millennials Refuse to Get Married."

Headlines won't quit trumpeting this generation's disinterest in one of society's oldest institutions. And the data supports the media narrative: Pew Research found that in 2012, 1 in 5 adults ages 25 and up had never been married, a historic high. Those who are getting married are doing it later than ever; the median age for first marriage is now 27 for women and 29 for men, up from 20 for women and 23 for men in 1960. Only 26% of Millennial adults, found Pew Research, are married.

All of which makes young married couples rarer and more misunderstood than ever. Young people, both straight and gay, who marry before they cross the mid-20s mark can face several stereotypes: They've acted recklessly or irresponsibly, they haven't really thought their decision through or they were only doing it for religious reasons. (The show Engaged & Underaged comes to mind.)

But there are plenty of young couples, defined here as 25 and under, who are making the choice consciously and responsibly — and reaping benefits that highlight what's so special about marriage in the first place. Not all young people worldwide have the good fortune to choose their own marital fate; but for the lucky ones who do, that choice can be the best decision they ever make.

Marrying young isn't the norm — so you're doing it because you want to, not because anyone's pressuring you.

Between News Feeds clogged with engagement photos and pestering from parents, marriage is on the forefront of most late-20-somethings' minds. "There's a lot of pressure on 28-year-old women who aren't married yet, because that seems to be the age when everybody is engaged and getting married. And those who aren't feel awful," Mikki Meyer, Ph.D. and clinical fellow with the American Association for Marriage and Family Therapy, told Mic.

That can lead people to tie the knot for the wrong reasons. "Very often you're marrying someone because they're filling a slot, and the slot's more important," said Michael S. Broder, Ph.D. and author of Can Your Relationship Be Saved? How To Know Whether to Stay or Go, to Mic.

But men and women at, say, 21 or 23 don't face those same expectations, meaning the decision to marry is one they genuinely want for themselves.

You have a built-in support system for your turbulent 20s.

The 20s are a time of major life change, most crucial being the struggle for financial independence plus new jobs, new cities and new friends. "The 20s are really a time when people discover who they are in terms of career and what they want in a relationship," Dr. Broder told Mic. "There are so many psychological challenges." That includes changes to our own brains, which are still rewiring through at least the age of 25.

This turbulence can pose a challenge for couples if they end up growing apart. Indeed, as Amber Vennum, assistant professor at Kansas State University, told Mic, "The risk of divorce for a first marriage decreases for each year older a woman is when she marries."

"For me, that was the scariest idea behind it: Would I be able to handle so many transitions at the same time?" said Ashley, 25, who married her boyfriend of seven years just one month after graduating college. "But we had supported each other through every life transition that we'd had up to that point. He was still going to be the person I'd go to with any work challenge or anything personal that was difficult for me. Being married was one more transition, but it was kind of exciting to face all those things together and know that you had that support system in place."

Jada, 25, currently in her first year of marriage, echoed the sentiment to Mic: "It definitely helps having someone that you know you can come home to every day, and someone there to support you and be there for you."

Tackling the bumpy 20s together can actually strengthen you as a couple.

Making the case for young marriage, Julia Shaw, a married Millennial herself, wrote in Slate, "The stability, companionship and intimacy of marriage enabled us to overcome our challenges and develop as individuals and a couple. We learned how to be strong for one another, to comfort, to counsel and to share our joys, and not just our problems."

Having a supportive sidekick through all your life changes isn't only helpful; facing all the changes can make the two of you stronger. "We moved into our first apartment together. We bought our first furniture for the first time together. Those life experiences where it's so exciting to be on your own for the first time, I did with a partner. And to me that's just amazing," Ashley told Mic.

The fun single things you're "supposed to do" in your 20s aren't actually life requirements.

"You see those lists all the time, the '27 Things You Should Do Before You're 27.' I look at it, and I'm like, 'Truthfully, how many of these things would I have done if I were single? Would I really have, say, moved to another country all by myself?' Probably not – I'm not that person," said Daria.

Each individual is different, meaning not everyone needs to go on a roadtrip or pick up a new sport to have a fulfilling young adulthood. But you can still do those things if you want to.

... but they can be even more awesome when done with your best friend by your side.

"In my experience, this idea about marriage as the end of the road is pretty misguided and means couples are missing out on a lot of the fun," wrote Shaw.

Because if you're married to the right person, young or old, marriage should be fun, and that person should be the one you want to do fun things with. "There is this strong misconception about how one person is going to take you and prevent you from doing those things [you're supposed to do in your 20s]," said Daria, "but you are in a good relationship, the hope is that's not true."

On the contrary, said Jada, "I wanted to travel by myself, and I felt that that was something I had to do. But once I was with someone, I was like, 'It's more fun traveling with someone I really want to be with!'"

Your spouse knows you from a young age and has seen you change for the better.

"Personally, I changed tremendously in college," Daria said. "I changed hugely as a person from the minute I met my now-husband to when we got engaged. I love the fact that he was able to see all of that."

Witnessing that change is crucial not only because of deep background you share; it also means you're comfortable with the knowledge that your spouse will change, and that you can roll with those changes. "Sex is going to change. Your partner may be very attractive, but looks are going to change. Interests, ambitions, things that you like to do together — they're all going to change. So if it's the person underneath that you're really attracted to, then the relationship's got a really good shot," Dr. Broder said.

You're proof that maturity does not come with an age requirement.

"Before you even consider marriage, you've got to be able to demonstrate that you can deal with conflict together," said Dr. Broder, which includes discussing everything from religion and sex to babies and families. "Very few couples absolutely agree on everything ... But if you know how to get past conflicts together, then I would say then you're ready to talk about marriage."

But young couples aren't incapable of doing this. As Dr. Meyer told Mic, "It doesn't matter what age they are, as long as they are willing to look at the big issues."

And plenty of young married couples know this well. "We had already developed such a strong, stable relationship that there had already been a lot of tests that made me feel confident in our ability to have a long-lasting relationship," said Ashley. "I felt like we were ready for this step and mature enough for this step."

Even if others have their doubts. Benjamin McGuire, who spoke to the New York Times about his decision to marry his boyfriend right out of college, said his parents' main reaction was: "Aren't you a little too young to be doing this?"

Ashley experienced a similar reaction. "I don't love hearing that people think my decision might not have been as thought-through or my relationship might not be as stable because I made that choice younger. I feel like everything we've done in our lives has been with a lot of care and consideration," she told Mic. "When new people meet me now at 25 instead of 22, the decision gets less questioning. It would have been nice if it got less questioning three years ago.

*Names have been changed.