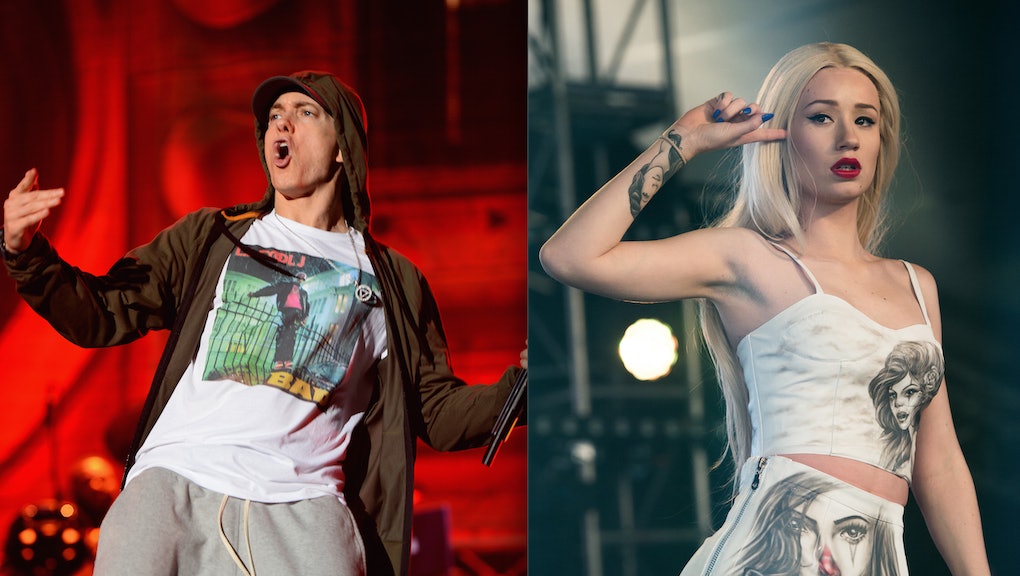 Eminem has been rapping for nearly 20 years. He's a 42-year-old man. And he still raps like a sexually frustrated teenager.

In a song leaked this week, he threatened to rape Iggy Azalea.

"Put that shit away Iggy. You don't wanna blow that rape whistle on me / Scream! I love it. 'Fore I get lost with the gettin' off,'" he rapped on the song "Vegas."

The imagery is horrific, dehumanizing and absolutely unacceptable.

Iggy Azalea, though, wasn't looking to take any disrespect. She shot back on Twitter hours after the song broke. But instead of attacking Eminem directly, she took a higher road.

She used the song as an opportunity to discuss the way women are currently treated throughout the music industry.

She also discussed the venomous effect such words can have on listeners, and why we as a society have to combat this kind of thinking.

Her point about her little brother brings the issue much closer to home. It shows exactly how far misogynistic lyrics reach. Even if they're in jest or merely acts of poetic license, they can affect an individual's entire world view and reinforce a culture of misogyny, which, as Iggy notes, is alive and well at all levels.

Throughout his career, Eminem has consistently been one of the biggest players in glorifying these misogynistic attitudes. Just last week Eminem threatened Lana Del Ray during his recent Shady cypher, rapping that he'd punch her in the face twice like Ray Rice.

He's been peddling the same horror for years, infecting other rapper's art as well. In 2000, on Redman's "Off The Wall," Eminem threatened Christina Aguilera: "Causin' terror to Christina Aguilera / When I grab her by the hair and drag her across the Sahara."

It also hasn't only been celebrities. On the song "Kim" he talked through every step of murdering and disposing of the body of his wife in graphic detail. And then he threatened every woman who menstruates on "Superman": "Put Anthrax on a Tampax and slap you till you can't stand."

Eminem's lyrics are a consistent stain on music culture. His content will likely always be disgusting, because it gets him headlines (like this one). The best angle his critics can take to minimize his impact is to do what Azalea did and take the critique beyond the artist himself. Call out the misogynistic culture that accepts such expressions as legitimate art. Her positive encouragement to other women working to overcome such aggression in the industry and society is a hopeful sign.

It isn't unfounded hope, either. Azalea's trend of women getting paid? This year she was part of the longest running all-female top five. She also set the record for longest run on the Hot 100 for a female rapper. Whatever Eminem says, she's doing alright.