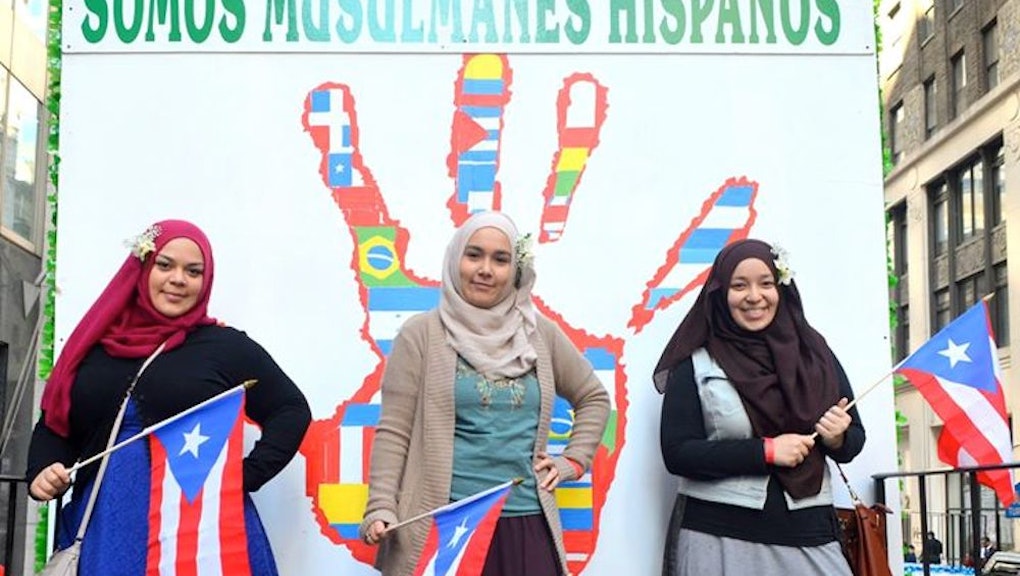 11 Photos Reminding Us There's No One Way to Be Latino

When we talk about immigration, far too often what we end up talking about is Latinos.

Immigration has been a widely discussed policy issue this year, most recently with President Barack Obama's announcement last week of sweeping executive actions meant to shield millions of immigrants living in the U.S. without documents from deportation. In a speech addressing the issue Nov. 21 in Las Vegas, Obama emphasized that not all immigrants are Latino, and not all Latinos are the same.

And yet the diversity of America's Latino population, often "othered" into one monolithic group under the label "immigrant" (or just, "Mexican"), is still widely misunderstood. There are over 53 million Latinos and counting in the United States. They now make up about 17% of the total population, and they hail from over 20 different countries with unique cultural traditions, physical features, family histories and heritages.

And they certainly don't all look or live the same. As the Huffington Post's Roque Planas writes: "One feature clearly unites the 53 million Latinos of the United States — Latin American or Spanish birth or heritage. But beyond that, the community's unifying characteristics disintegrate into a geographically disaggregated, bilingual jumble of two dozen nationalities and differing levels of acculturation."

From young to old, Latinos are becoming a greater presence in the United States. It's important that Americans educate themselves on this growing demographic to cut down on the stereotypes and misconceptions that continue to dominate conversations. For one thing, not all Latinos are from Mexico. While that is the country of origin most represented among Latinos, members of the demographic have roots in Central and South America, from Honduras to Colombia to El Salvador to Spain.

Moreover, numerous countries in Latin America, including the Dominican Republic, Brazil and Cuba, have African influence as a result of the slave trade in the 16th to 19th centuries. So while Western Europe helped shape Latin culture, from language to religion, millions of people also have strong African roots.

The majority of Latinos in the United States and throughout the world have close ties to the Catholic religion, but recent data show there has been a shift lately in religious ideology.

A Pew Research Center poll reveals that there has been a 12% drop in Latinos in the United States who identify as Catholics in the past few years alone. Meanwhile, a growing number of Latinos are joining other faiths such as Judaism and Islam.

Along with religion, traditional holidays are deeply embedded in Latino culture, but vary widely from group to group. The Day of the Dead is celebrated in different Latin American countries, but as National Geographic points out, the holiday "is most strongly associated with Mexico, where the tradition originated."

Three Kings Day, also referred to as Epiphany in the Christian calendar, commemorates the Biblical "wise men" who, according to the traditional account, traveled far distances to pay the newborn Jesus tribute.

The holiday has long been celebrated in various parts of Latin America (as well as Europe), and Christian Latinos in the United States have since embraced the holiday and made it their own.

Arguably one of the most important aspects of Latino culture is its emphasis on the family, often to degrees that separate them from other cultural groups. As research out of the Ohio State University pointed out, "family is a close-knit group and the most important social unit" for Latino communities; "loyalty, reciprocity and solidarity" between family members are highly valued.

Studies have also shown how strong familial and parental participation is crucial to the success of Latino children of immigrant parents. While still a stereotype, this emphasis on the family can have a distinct, positive impact on Latino communities.

As of right now, less than 5% of those serving upper-level roles in Fortune 500 companies are Latino. But as the Latino population continues to grow in the U.S., more and more Latino leaders are certain to be incorporated into executive and government roles.

These future leaders will help a diverse and under-represented demographic a more powerful voice in this country. It only makes sense, given that in 2012, the purchasing power of Latinos was estimated at $1 trillion, with some experts claiming it would reach $1.5 trillion by 2015, according to Forbes.

Ultimately, the Latino community draws strength from its diversity.

"Those of us who've been in the field, we can articulate the specifics of our community. To other folks, it's this huge swirl," activist Tony Diaz told the Huffington Post. "I think what we will need for our community is 1,000 leaders. It's not going to be like the civil rights era where you can have one leader. It's not in our interest."

Clearly, there isn't just one Latino identity or one kind of Latino leader — and that's a pretty beautiful thing in itself.