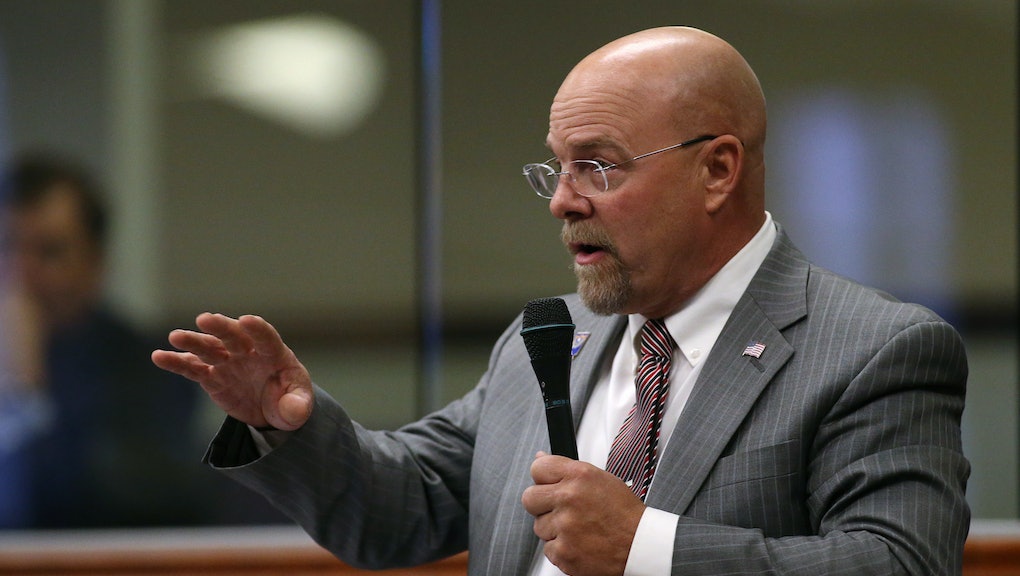 Meet the Most Racist Politician in America

He calls black "Negroes." He hates the women's rights movement. He warns of gay child molesters.

He's Nevada Assemblyman Ira Hansen, and he's set to become the speaker of the state's Assembly.

Hansen's history of racist, sexist and generally insane comments in print and on the radio were chronicled by the Reno News & Review  Thursday, less than two weeks after he was selected as speaker by his fellow Republicans. His rantings, going back to the 1990s, reveal a man who shouldn't be speaking for anyone, let alone the Nevada Assembly.

The lowlights: In a column about education policy, Hansen wrote, "The relationship of Negroes and Democrats is truly a master-slave relationship, with the benevolent master knowing what's best for his simple minded darkies."

He dedicated other columns to taking down Martin Luther King Jr., calling him "a hypocrite, a liar, a phony and a fraud." He wrote that he keeps a Confederate flag on the wall "in honor and in memory of a great cause and my brave ancestors who fought for that cause."

When it comes to women, Hansen fares no better. "Women, historically, have been the nurturers and mothers while men have been the providers and defenders," he wrote in 1997. Four years later, he was fondly recalling gender roles before the 1960s. "Thanks to the 'sexual revolution' and the 'women's liberation movement,' women chose to act as foolishly as men, and illegitimacy also went through the roof," he wrote.

Moving forward: When Republicans took the majority in the Nevada Assembly earlier this month, they elected Hansen as their speaker. His term will start next year, unless other Republicans decide to backpedal thanks to the bad press.

It wouldn't be too much of a loss, since Hansen isn't even a good Republican. He opposed Mitt Romney as a presidential candidate (he was too liberal) and has fired shots at other lower-level Republicans, according to the Reno News & Review.

As much as Hansen might seem like a crazy racist caricature, he is a real politician who was really elected by voters and is set for a real leadership role in the Nevada Legislature. That alone says plenty about how far the country still has to go.