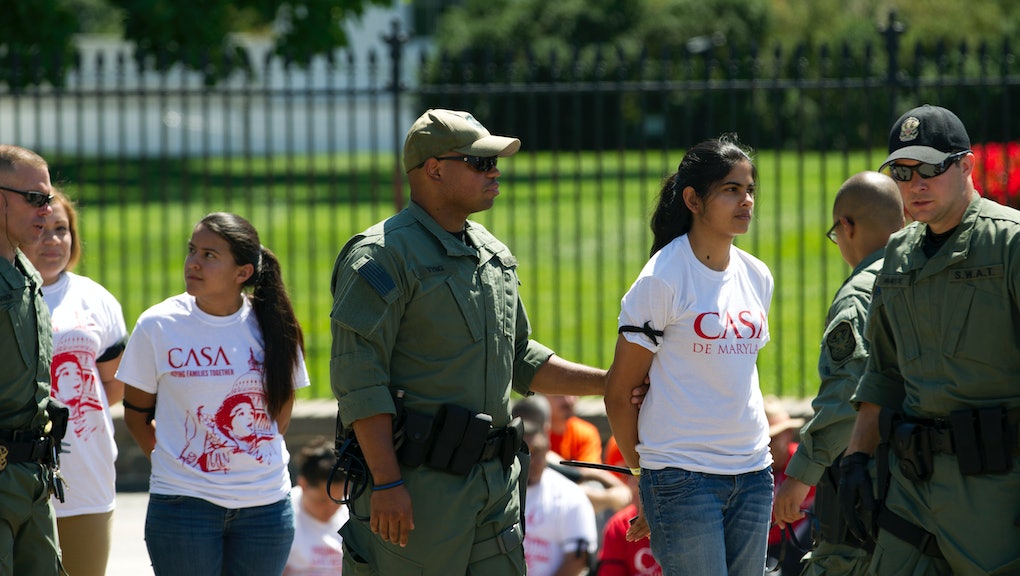 President Barack Obama's decision to move forward with a series of unilateral actions on immigration was met with another predictably overwrought round of accusations from Republicans. Despite the consensus that his use of executive power is on firm legal ground, opponents still denounced him for acting like "an emperor" or declaring "constitutional war."

Obama's new programs will, among other things, shield 5 million people living in the U.S. illegally from the threat of imminent deportation. Many of them will also have the opportunity to apply for temporary work permits. The White House says the ultimate goal is to bring these hard-working men and women out of the shadows and into the system, to have them paying taxes and participating more fully in the democracy.

But in crafting his plan, the president fell short in one key area. His latest actions do not provide those newly-protected immigrants access to health care benefits under the Affordable Care Act, preventing millions of people from purchasing coverage and receiving subsidies.

Obama could have, within the parameters of existing law, broadened the scope of the program as part of his executive action. By failing to do so, he passed up a golden opportunity to provide health coverage to millions of immigrants and, in doing so, strengthen his signature domestic policy achievement.

The background: The issue of whether unauthorized immigrants would have access to benefits under Obamacare was a major sticking point during the crafting of the law. Rep. Joe Wilson (R-S.C.) infamously interrupted the president's 2009 address to Congress to holler "you lie!" in response to Obama's promise that immigrants living in the country illegally would be not be offered access to the new health care system. When the ACA passed in 2010, immigrants in the country without authorization were prohibited from receiving government subsidies for coverage, participating in health care exchanges or signing up for Medicaid.

Crucially, Obamacare does allow for immigrants who are "lawfully present" in the country to receive those benefits, including those immigrants with "deferred action status." But not all of them. In 2012, the administration made the decision to carve out an exception to the deferred action rule, preventing immigrants protected under the newly established Deferred Action for Childhood Arrivals (DACA) program — the "dreamers" — from receiving benefits.

Obama's expansion of the DACA program means millions of additional immigrants will receive protection from deportation but still be denied access to Obamacare.

No good reason: There is no legal reason for doing this. It's a political calculation, pure and simple. And the calculation undercuts the rationale for implementing the health care overhaul.

Obamacare is notable for a number of things, but three in particular: mandating that individuals get covered, on their own or through an employer; helping those individuals access affordable care with the help of public marketplaces and government tax subsidies; and a long-range promise of cutting excessive spending on health care. By denying millions of people who will soon be working legally and paying taxes access to those benefits, the president has effectively said those principles are, after all, negotiable. (He's also denied us the spectacle of Republicans publicly arguing that people here without legal status shouldn't have the privilege of access to Obamacare.)

In any case, the immediate expense would, by the very logic of the reform, be offset by the savings down the road. Hospitals do now and will continue to provide emergency care for everyone, regardless of their legal status. And with more people now likely to seek medical care without fear of getting themselves or their families deported, there is no good reason not to do everything in our power to get them covered.

Half-measures: No future immigration reform bill will ever do as much for immigrants as what President Obama laid out Thursday night. So why shorten the field now?

Though the White House has been unusually guarded about the process, it appears that they modeled the actions on a bipartisan bill, which also denied the subsidies, that passed the Senate in 2013. That legislation, crafted to appease skeptical Republicans, never saw the light of day in the GOP-controlled House of Representatives. In his speech last night, Obama scolded House Speaker John Boehner for denying the bill a "yes-or-no" vote, but also, rightfully, described it as "not perfect": "It was," he said, "a compromise."

Fair enough. That's the nature of crafting legislation across party lines. The president wouldn't have been in a position to execute these new actions if the 2013 bill had passed both houses. But it didn't. The bill is going nowhere. And without an empowered opposition to check his desires, Obama had the right — and the duty — to go forward with stronger and more righteous actions.

Instead, we got half-measures. A nod to a compromise that Republicans have no intention of making. President Obama took a number of smart steps Thursday night — his plan will benefit millions of people richly deserving of a real opportunity to openly join the America they have been so essential in helping to build — but he owed them more. We owe them more.