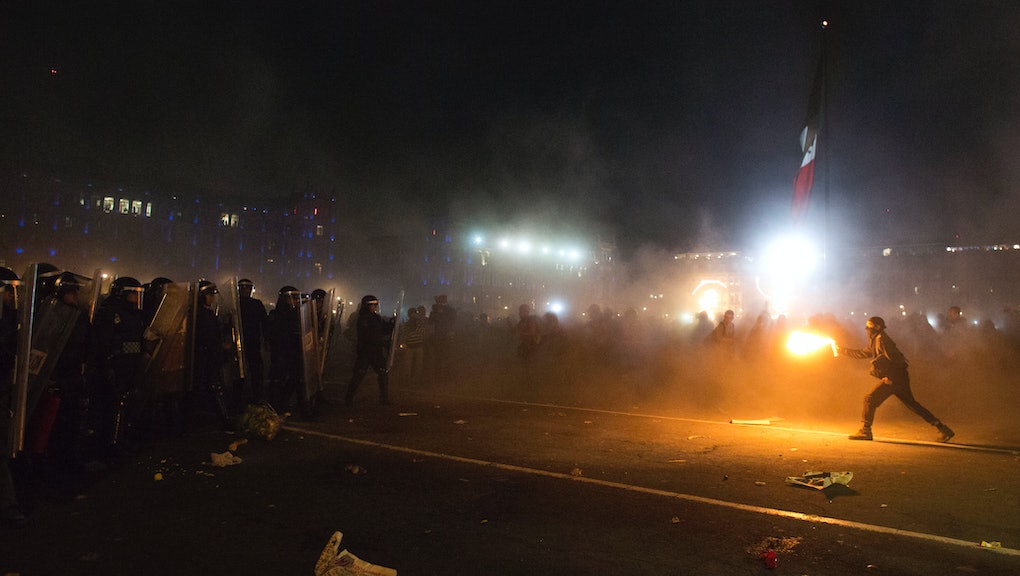 Tens of thousands of demonstrators flooded the streets of Mexico City on Thursday in one of the largest shows to date of public indignation over government corruption and the disappearance of 43 college students from the southern city of Iguala.

Demonstrators marched towards President Enrique Peña Nieto's National Palace to protest his handling of the probable massacre. Hundreds of police in riot gear blocked access to the palace, where thousands of protesters gathered to demand justice for the students who disappeared on Sept. 26.

As evidence and more witnesses emerge, clues to the mass kidnapping point to collusion between local officials and a drug cartel. The students were likely killed and incinerated, a still-unfolding tragedy that has torn at the seams of Mexican society and exposed the rotten parts of the Mexican political system.

"I am here because I have children who are students and one day they could be No. 44," Roberto Garcia Santibañez, a 54-year-old architect who protested in Mexico City, told the Los Angeles Times. "They are not going to silence us. If they want to quiet us, we are millions that the government will have to confront."

The disappearance of the 43 students has galvanized support from people around the the world. In New York, members of the Mexican community and supporters gathered outside of Mexico's consulate and marched towards the United Nations headquarters. Their demonstration coincided with that of the anniversary of the 1910 revolution and the protests in Mexico City.

Thursday's mass protests, which marked the date when Mexico's national hero Francisco Madero called for Mexicans to rise up against a dictator and subsequently began the Mexican Revolution, present a palpable irony. In his message to followers, Madero rejected an offer by dictator Porfirio Díaz "because its basis is not law but force, because its object is not the aggrandizement and prosperity of the country but to enrich a small group who, abusing their influence, have converted the public charges into fountains of exclusively personal benefit."

As the protests continue, citizens around the world are beginning to realize that collusion, although indirect, go beyond Mexican officials and drug cartels. The White House's silence, writes activist Christy Thornton, "signals its intention to continue the failed policies that have led to such upheaval in Mexico."

The U.S. expanded its security cooperation with Mexico in 2007 with nearly $1.4 billion in funds designated for Mexico, Central America, Haiti and the Dominican Republic. The bulk of the money went to Mexico "with a mandate to 'break the power of organized crime, strengthen the U.S. southern border, improve Mexican institutional capacity and reduce the demand for drugs,'" Mic reported. The aid has grown to more than $3 billion.

From Mexico City to New York, the moment of solidarity is taking a stand against lackluster policy from both countries, holding leaders accountable and demanding justice for the thousands of disappeared.