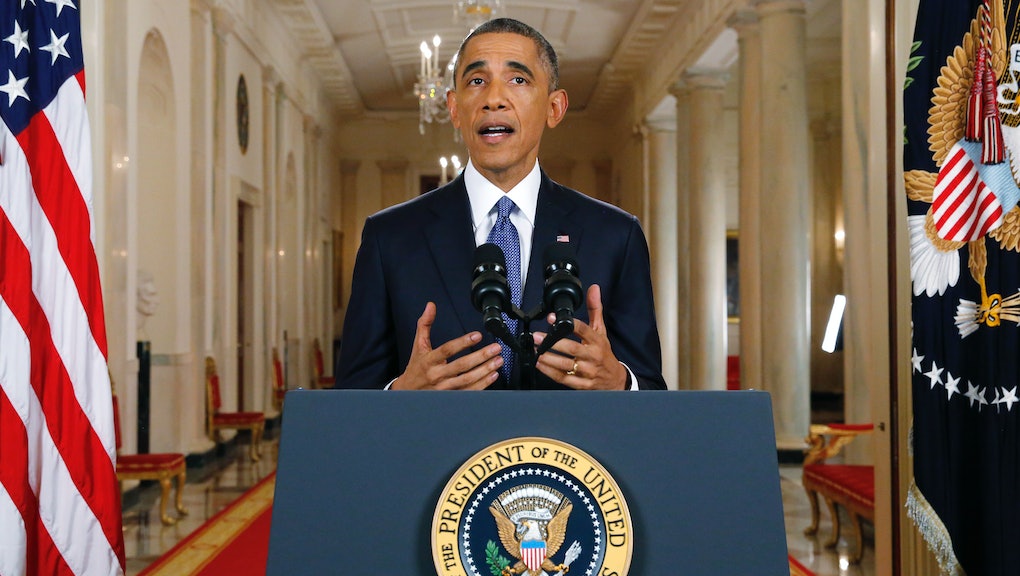 No, Obama's Immigration Plan Doesn't Make Him an 'Emperor'

President Barack Obama announced a series of executive actions Thursday night that will protect millions of immigrants residing illegally in the United States from deportation and provide many of them with work permits.

Despite the fact that immigration is an exceptionally divisive issue, the bulk of the reaction to the announcement has centered on the way the president has chosen to pursue his agenda — specifically, the exercise of executive powers that bypass Congress.

The actions have Republicans crying foul play and conservative pundits declaring Obama's move a "betrayal of our political order." A spokesman for House Speaker John Boehner (R-Ohio) dubbed the president "Emperor Obama" before the announcement of the plan. Even some prominent liberal political analysts are fretting that this sets a dangerous precedent for norms of governance.

So is Obama's executive action truly a small step toward a tyrannical presidency?

Firm legal footing: While presidential scholars do consider Obama a contributor to the long tradition of presidents expanding executive power, there isn't strong evidence that this action on immigration is setting us down a dark path.

Obama is operating well within the scope of the law, and he's far from the first to employ executive actions to carry out a policy on immigration. Dwight D. Eisenhower, Ronald Reagan, and both Bushes have all used executive actions to manage the legal status and deportation rate of immigrants. A number of prominent legal scholars outside the White House, both liberal and conservative, have publicly declared it lawful.

What is unprecedented is the scale in this realm of policy. Obama's executive actions will shape the fate of up to 5 million people living in the United States without legal documentation, which is much larger than any such action in the past.

It's a matter of scale: But the sheer size of the matter should not distract from the fact that, historically, presidents have made use of their executive powers to circumvent a hostile Congress at critical political junctures.

"For decades, presidents have exercised their unilateral powers in order to reshape highly contested policy domains — and often to considerable effect," William Howell, a presidential scholar at the University of Chicago, told Mic.

"On issues involving race, the relationship between religious organization and the government, the environment, and much more besides, past presidents have unilaterally instituted policies that would not —and usually could not — survive the legislative process."

The Louisiana Purchase, the Emancipation Proclamation and the creation of the Environmental Protection Agency are all historical examples of major executive actions that wouldn't have made it through the conventional legislative process at the time they went into effect.

Symptom of gridlock: That being said, the fact that Obama has had to charge ahead unilaterally on one of the few issues for which there's a natural basis for bipartisan partnership — electoral realities require the Republican Party to set aside its xenophobia as soon as possible — is a reminder of the poor state of governance in Washington.

Republicans will bark madly about "emperor Obama," but amending his policies would require them to end the obstructionism that led him to act on his own in the first place. In other words, their addiction to gridlock means they may have no bite on this matter.