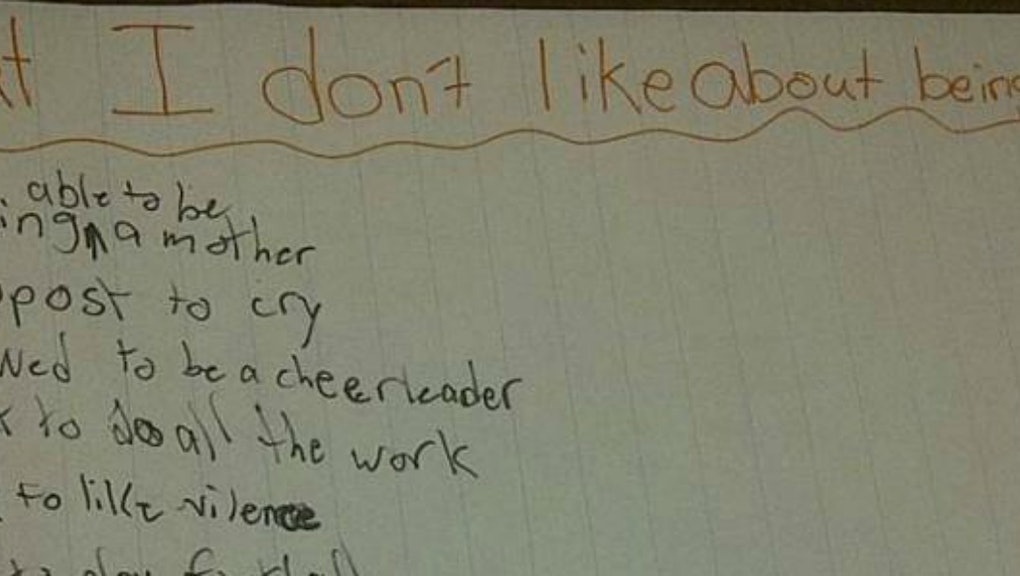 When we talk about the unreasonable expectations of gender roles, we're normally talking about women. But a 9-year-old boy made a good point: Men face a lot of pressures too.

The boy made a list of all of the things that he doesn't like about being a guy, and his answers are incredibly spot-on. While it's originally from 2012, the list went viral on Twitter on Thursday as part of International Men's Day:

The boy compiled the list at a workshop by Jeff Perera, a community engagement manager for White Ribbon, an Australian organization that works to prevent male violence against women by educating men and boys.

The 9-year-old's list includes numerous masculine stereotypes, from the expectation to like sports to the machismo ideal that emotions are just for girls. He also brings up the problem of society's negative perceptions of men, who he says are supposed to like violence and have an "automatic bad reputation."

Men face a lot of pressures. These often go undiscussed. Because men wield more cultural and institutional clout in society, we tend to not to address the expectations that their gender can impose on their actions and attitude.

According to a study done by the University of Warwick earlier this year, young men face "intense pressure to demonstrate the extent of their manliness." The boys in the study struggled to prove their masculinity, leading to "everyday low-level violence" like slapping and hitting each other. The boys were encouraged to physically fight other if they were ever mocked or offended, felt pressured to drink unhealthy amounts of alcohol and struggled with anxiety about proving themselves and suppressing their feelings — all while lacking a strong emotional support system.

While feminism aims to combat gender stereotypes of all kinds, the conversations we have about gender — especially on the Internet — frequently revolve around women. It's easy to argue that the issues regarding masculinity and male psychology are less relevant when compared to those of traditionally marginalized groups, but the power men wield makes male gender norms all the more worthy of discussion. We can't change the unreasonable constraints of gender norms for all if we're ignoring the unfair expectations shouldered by half of the population.

The pressures of manhood don't just affect men; they also affect women. When we don't call gender stereotypes into question, we risk young boys continuing to strive to fit a norm that, as this boy's list reveals, is deeply flawed.