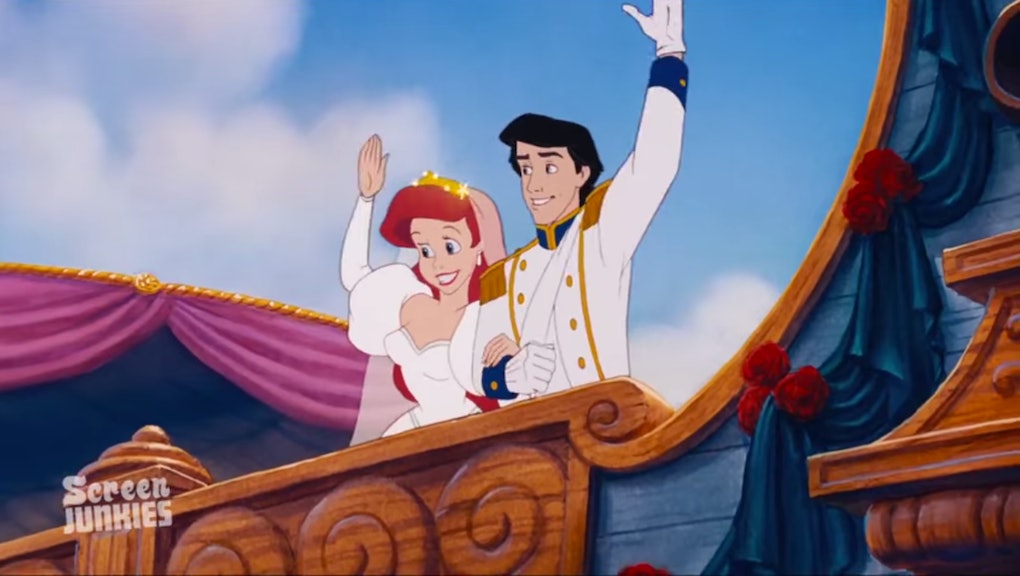 One of America's favorite Disney princesses might not be as glamorous as we thought.

While animated films likeThe Little Mermaid continue to have a special place in the hearts of children and adults alike, the catchy tunes and adventure-filled storylines of Disney's classics often mask potentially damaging messages.

But not anymore. In an effort to expose the benevolent sexism that bubbles beneath the surface of the sea-set classic, the folks at Screen Junkies have created an "Honest Trailer" highlighting what these kinds of movies are actually teaching our children.

"Get swept up in a fantastical romance where love conquers all — if by love, you mean acting like a clueless, mute brat so an older guy will make out with you," the narrator says in the new and improved movie trailer. "And enjoy a vintage Disney classic with an equally vintage message for today's young girls: Look pretty, surround yourself with friends who are dumber and fatter than you, abandon your family to marry a guy you just met, and if you're not happy with a contract you signed without even reading, get your fiancé to murder the person who outsmarted you."

The satirical video also calls out Disney for its decision to draw Ariel's figure with wholly unrealistic measurements that put Barbie — not to mention teenage girls — to shame, going so far as to rename the film The Little Waistline.

The good news is that increasingly, people are starting to pay more attention to these types of stereotypes. BuzzFeed went so far as to reimagine Disney characters with more realistic waistlines, for example. But many issues remain in the Disney canon, specifically surrounding the portrayal of nonwhite ethnicities. Indeed, according to Dadaviz's Jody Sieradzki, princesses of color are much less popular and see much less merchandise on eBay than their lighter-skinned peers.

These conversations need to continue if we're going to create a culture of respect, equality and empowerment, especially for young women and girls. Hopefully, adults watching this film and others like it will take a moment to first teach young girls and boys alike that this can't and shouldn't be the way we understand becoming a woman in America.