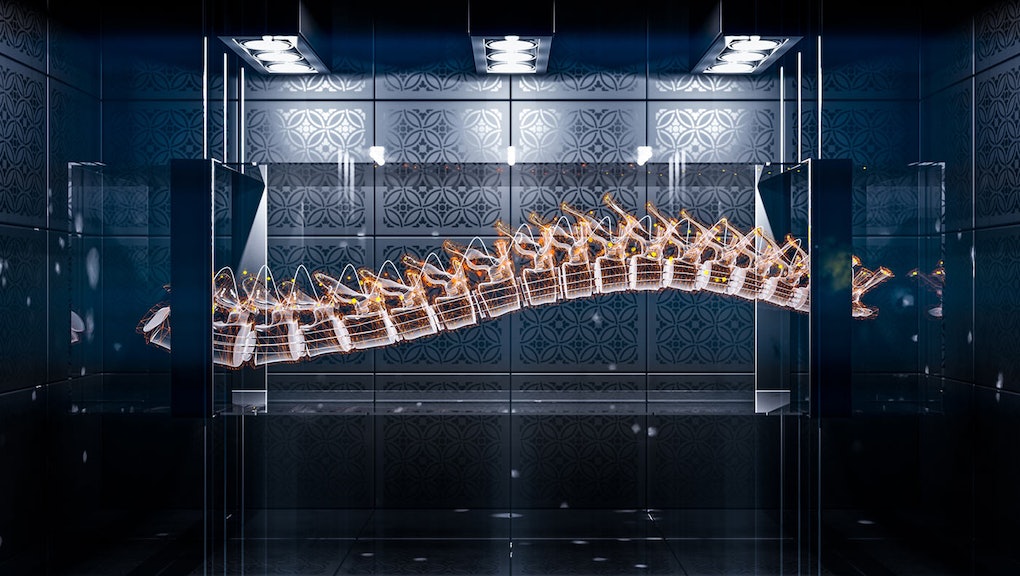 These 11 Incredible Instruments Could Be the Future of Music

Humans have been making music since the dawn of time. It stands to reason we'll continue making it until the end of time.

In the same way that dubstep would have likely forced listeners from the 1800s into immediate cardiac arrest, the music of the future will likely be unrecognizable to us in many fascinating ways. The Red Bull Music Academy, an organization dedicated to cultivating and sharing progressive music, created a feature series to discovering what those new sounds might be.

The year 2214 is their target. Curator Todd Burns invited some of today's most promising, future-conscious creative minds from a variety of disciplines to share their visions for the instruments we'll use to create music 200 years from now. Rapper Tyler, the Creator, Detroit techno legend Jeff Mills, industrial designer Konstantin Grcic and many others weighed in. The ideas they came up with are brilliant fuel for the imagination.

Renowned graphic designer Kim Laughton illustrates each of the ideas. Burns told Mic that Laughton's unique style was a partial inspiration for the project.

"His designs are some of the most eye-catching things I've personally seen in the past few years," Burns wrote via email. Laughton's illustrations really bring the ideas, which range from plausible to dystopian, feel far more urgent and attainable.

There should be no doubt in anyone's mind — the future of music will be beautiful.

There will be no more singing, no more bass, guitars or keyboards in the future. Tyler, the Creator believes the future of music will be screaming. Of course he does.

But this won't be any ordinary screaming — it'll be screaming that one can pitch-shift and pan in a million different ways to make a massive variety of sounds an instrument called a "Shout Box."

"Am I into it?" Tyler writes on the project's website, "Fuck no, but as time passes the younger generations are going to be so hyped on it that it doesn't matter what I think. I'll be old and dead."

Vakoch is the director of Interstellar Message Composition at SETI Institute or Search for Extra-Terrestrial Intelligence. His idea imagines the possible trajectory of his institute's work as it relates to finding alien life.

Instead of sending out standard music, speech as an attempt to contact alien life, humans in 2214 will send "celestial music" made up of "ethereal thoughts." Terrestrial music, he suggests, will exist mostly outside the realm of audible sound. It will be "contemplated" and felt with the body, but not experienced in the traditional way by the ear. For those playing along at home, this sounds, more or less, like the plot of Steven Spielberg's Close Encounters of the Third Kind.

"Inspired by the decades of research and development in wearable technologies and biofeedback, the SPINE is a wireless, digital exoskeleton worn and used by both dancers and musicians alike," Wood writes for his entry in the series.

The SPINE will translate the movements of dancers and musicians into beautiful sonic landscapes. Numerous inventors have already begun to experiment with music created by the natural movements and rhythms of the body. A full body instrument might be a lot closer than 200 years away, and similar technology has already begun penetrating dance.

As music creation software gets progressively more accessible, Harper believes the boundaries between artist and listener will begin to blur. People will make their own music by interacting with software and other music-creating landscapes, both physical and digital.

"Gan" is a hybrid physical and digital landscape. One creates music with it by moving through it with a controller. The music changes depending upon the way one interacts with their environment. This is an idea a lot of people have already begun exploring with incredible music apps.

The Clone 101 Reality Player is a full-body "liquid" suit that one will allow one to experience music as a fully immersive sensory experience.

But beyond just stimulating the sense neurons in one's skin, it will also include a synchronized visual aspect. This will allow a "listener" to see and feel what the musician was feeling when he created the piece.

"Understanding how anything is created has enormous benefits to any art form," Mills writes. Consistently allowing listeners a direct experience with the creation of musical works may help to lift our potential creativity to entirely new heights. And the urge to participate in the creation of a beloved artist's music is already its own market.

Guppy also believes the boundaries between musician and listener will all but dissolve in 2214. His body modulator is essentially a fusion of the "Clone 101" and Harper's "Gan." Listeners will create music by passing a "Body Modulator" over different parts of their body. The music will enter the Cloud where others will mix in their own sounds and add music in a continuously evolving musical stream. It's the extreme extension of the modern thrust toward streaming music.

"Being a synth designer, I'm going to describe what synth might look like in 200 years," Smith writes.

He elaborates a display system for synth keyboards, which he says are the future. However, current screen displays are difficult to use mid-performance because musicians actually have to look at them and scroll and click to change the sound. His Prophet 2214 introduces new technology so that physical knobs can rise out of a screen display to help musicians get tactile feedback while they play.

Taniguchi believes body modification will be commonplace by 2214. People will embed electromagnets under their skin so as to feel music in a more visceral way. They'll also be able to use them like pick-ups on an electric guitar to amplify sounds made on or near the body. We'll all be able to plug ourselves into amplifiers and have the sounds from our bodies blare out. And if the illustration is any indication, we'll all look horrifying as we do it.

Embedding a sixth sense of electromagnetism is already a possibility for humans. Sharks do it naturally.

Sodeoka believes music will be ever-present in 2214 but not always perceptible.

It will beamed to Earth by satellites and will be barely audible. But through "advanced radio microwave technology" it will communicate directly with the spirits of all living things, instead of simply their bodies. In this way, music will hold more sway over living beings. Sodeoka believes it be able will "neutralize nations at war, quell rising crime rates in urban and suburban areas and reverse environmental damages."

Laughtin's vision of the future of music is far bleaker than any of her peers. She believes there will be no humans living on Earth in 2214. The only music will come from the humming and whirring of massive supercomputers, which have since dominated every inch of the Earth's surface. The Earth will be abuzz with sound, similar to pieces musician and programmer Matt Parker made by remixing sounds taken from the humming of data centers at the University of Alabama.

Grcic offers something closer a Zen koan to relate his vision what the future of music sound like be.

"What does it do?

What is the music world like at this point?

It's a bit oblique, but he has a point. Whatever music sounds, looks or behaves like in 2214, it will still be music. It will still make people feel. This might be the most powerful and profound truth about the future of music out of all of them — our instruments change, but our art doesn't.