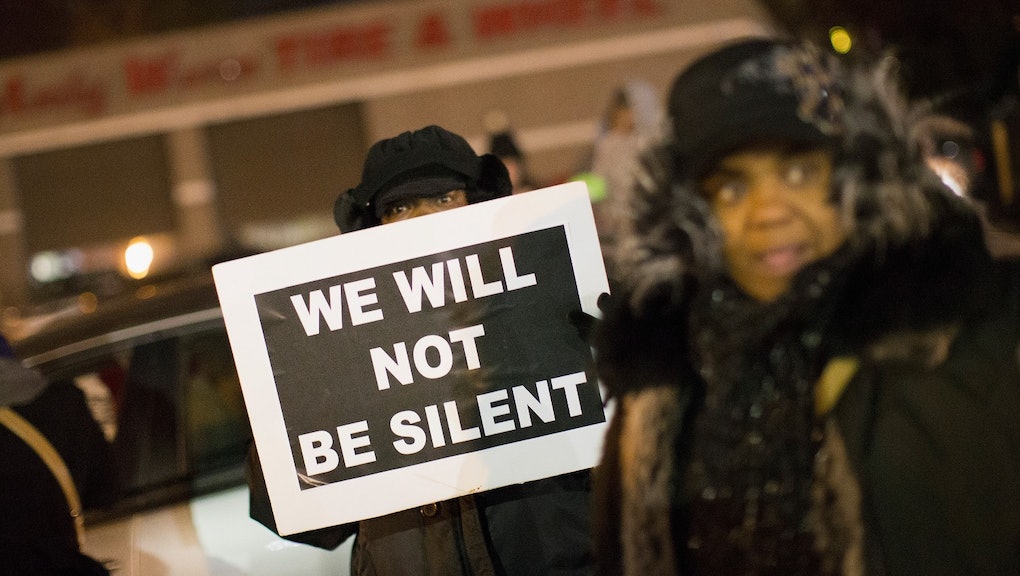 An investigation in Ferguson, Missouri, from journalist Shaun King has cast doubt on law enforcement's version of events just as the town — and the nation — prepare for the outcome of Officer Darren Wilson's grand jury investigation.

After Wilson fatally shot 18-year-old Michael Brown, St. Louis County police Chief Jon Belmar told reporters that Brown had been shot 35 feet from Wilson's SUV. King measured the actual distance, though, and it comes out to about 148 feet.

That may seem like a tiny detail, but for a case built around Wilson feeling so threatened that he was justified in using lethal force to protect himself, it matters. When it comes to being scared for one's life, 35 feet and 148 feet can make a world of difference.

The investigation: In photos of the scene, King took note of where Brown was shot and where Wilson's SUV was left. While the vehicle is obviously gone now, its location can be surmised from context clues, notable a yellow fire hydrant. The spot where Brown was killed is easier to find, given that it's the site of a big memorial.

Google Maps called it a 148-foot difference, but King still went out to Ferguson to measure the distance in person:

According to King, St. Louis County police have not responded to multiple questions about the discrepancy. The 35-foot figure has been a part of the conversation since Belmar's comments, though. Here's the original press conference, and CNN using it to frame a discussion about Ferguson:

That invites questions over what the grand jury was told — were they given the police's original statement that Brown was 35 feet from the SUV? The answer could have a big impact on their finding.

Going forward: This finding will have a major impact on the reaction to the imminent grand jury decision, both in Ferguson and around the country. Missouri Gov. Jay Nixon declared a state of emergency in anticipation of protests, and other states and cities are preparing for similar outrage if Wilson isn't indicted.

U.S. Attorney General Eric Holder urged law enforcement to remain calm in the wake of the decision, which is expected Sunday. Many think Wilson will escape without charges.

WIlson is already in talks to resign from the Ferguson police force. But no matter the grand jury outcome, this investigation has made at least one thing crystal clear — we're nowhere near done with this case.