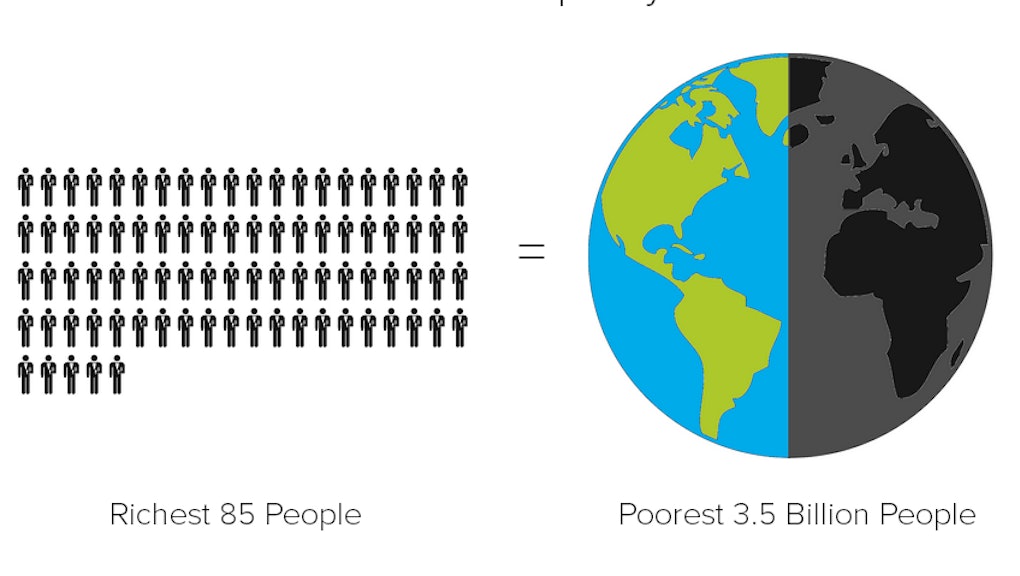 The 85 Richest People in the World Control as Much Wealth as the Poorest 3.5 Billion

Our era demands a new Charles Dickens; A Tale of Two Cities will no longer suffice.

A recent report from Oxfam reveals that the 85 richest people in the world own as much wealth as the 3.5 billion poorest, or half the world's population:

On average for the past year, this elite class of 85 has grown $668 million richer every day.

Wealth inequality between nations isn't at an all-time high, largely due to swift growth among emerging economies such as China and India. But within them, it continues to accelerate. Seven out of 10 people live in countries where economic inequality is greater than 30 years ago.

In the wake of the Cold War, most of the world has embraced a model of deregulated capitalism that has allowed economies to grow larger and more connected but produce most of their benefits for a small portion of the population.

In times of crisis, this disparity becomes particularly apparent. The global financial crisis caused a spike in food prices, unemployment and cuts to vital social spending all over the world. Since that crisis, many of the world's largest corporations are raking in record-breaking profits, and the world's billionaires have more than doubled, rising to 1,645 people.

The Oxfam report argues that the chief causes of this tale of two worlds are a blind faith in the free market to mete out just outcomes and political institutions increasingly held captive by elite interests.

But it doesn't have to be this way. Oxfam makes some calculations about lightly taxing the world's wealth:

"A tax of just 1.5 percent on the wealth of the world's billionaires, if implemented directly after the financial crisis, could have saved 23 million lives in the poorest 49 countries by providing them with money to invest in healthcare. The number of billionaires and their combined wealth has increased so rapidly that in 2014 a tax of 1.5 percent could fill the annual gaps in funding needed to get every child into school and deliver health services in those poorest countries."

Such a tax is not the only way to mitigate inequality, but it's a good starting point. More importantly, there must be popular pressure to convince the world's elites that new beginnings are needed.